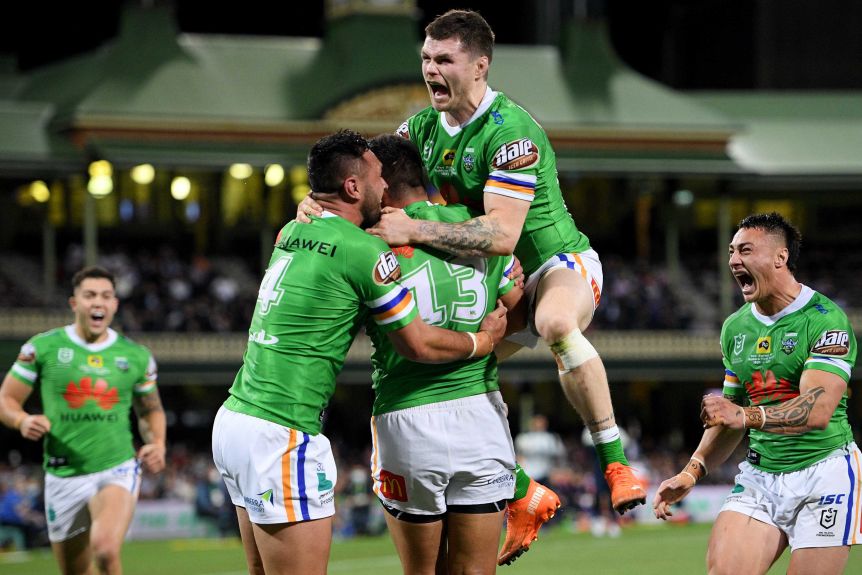 Raiders five-eighth Jack Wighton buried last year’s grand final demons by leading Canberra to a gripping 22-18 defeat of Sydney Roosters that ended the bid by the premiers’ hopes of a three-peat.

Wighton, who was at the centre of controversial six-again call that overshadowed the Roosters’ grand final defeat of the Raiders, scored the match-winning try 11 minutes from full-time to put the Green Machine within one win of another decider.

Prop Josh Papalii laid the platform for the win by scoring an early try and setting up another in a dominant performance that confirmed his standing as the game’s best prop, while fullback Charnze Nicoll-Klokstad produced three try-saving efforts as Canberra hung on.

South Sydney will march on to their third grand final qualifier in as many seasons after a stunning 30-point fightback ended Parramatta’s horror week with more finals heartbreak.

By all rights, not least their pre-game lead-in, the Eels were dead in the water.

A simply electrifying first-half flurry by Clint Gutherson and co proved otherwise, with three tries in five minutes as “The King” reigned supreme making for a shock 18-8 Eels lead.

The Bankwest crowd was duly in raptures, only for Damien Cook to answer in kind and run riot himself.

Cook had a hand in three tries as the Rabbitohs rattled up 30 points in 40 minutes after the break, ruthlessly exploiting critical errors from first Mitch Moses and then Gutherson himself.

With South Sydney storming back to a 20-18 lead after halftime, Moses lined up a penalty goal from point blank range with 19 minutes to go.

Instead of levelling proceedings, Moses’ shot cruelly struck the upright, ricocheting straight to Jaxson Paulo for a 60-metre run downfield.

By the set’s end Gutherson, until this point a moral for man-of-the-match honours, was fumbling a Cook grubber straight to Bailey Sironen.