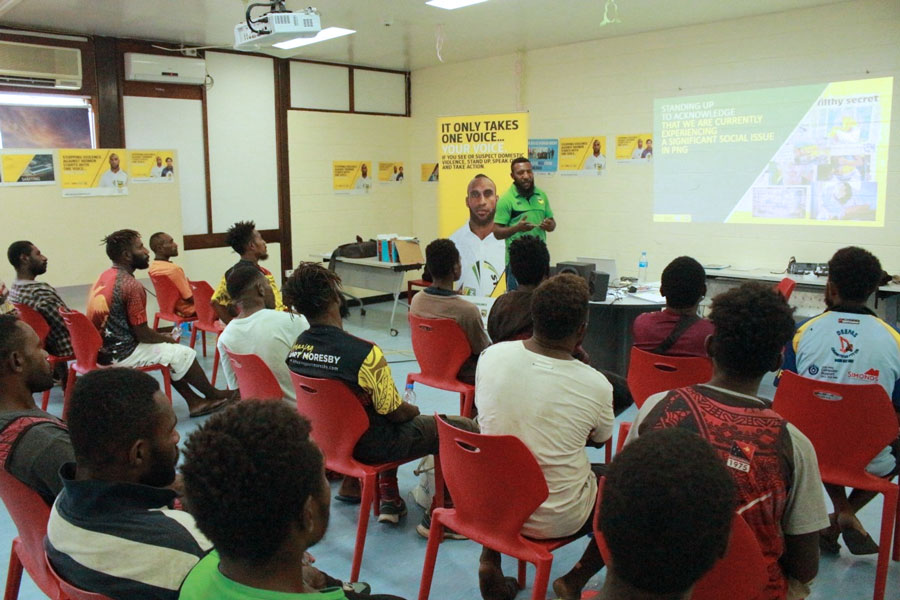 Rugby league is traditionally known for its hard runs and big hits, but a ground-breaking program using the popular sport across the Pacific to encourage respectful relationships is re-shaping its role in the community, and bringing new benefits off the field.

The National Rugby League (NRL), through staff in Papua New Guinea (PNG), Fiji and Tonga, runs the Voice Against Violence program, supported by the Australian Government through the Pacific Sports Partnerships (PSP), PacificAus Sports and the Australian High Commission in PNG.

Drawing on the behaviours and attributes needed to be a successful rugby league player, and their similarities to the building blocks of healthy and non-violent relationships, Voice Against Violence weaves together rugby league-themed activities and key messages to deliver accessible information in a team setting.

The program runs sessions for male and female teams, with a focus on young men. At the end of a session, each team writes a pledge containing three actions describing how they will ‘stand up, speak out and take action’ against violence in their community.

NRL PNG manager and inaugural captain of PNG’s national women’s rugby league team, Cathy Neap, who has led the rollout of Voice Against Violence in her nation, believes what people learn from sport, often without realising, can have wider benefits in life.

“The qualities you find in a great rugby league player or sportsperson are also found in great men and women when it comes to relationships,” Neap explained. “Sport teaches people to be positive, hardworking, and respectful to each other and their teammates.

“These are the very values that bring peace. When young people play sport, they are more likely to have these values and, when channelled in their daily life, this can help create peace in relationships with their partners, family and community.”

As the program enters its fourth year in PNG, its impact is growing. Complementing support from the Australian High Commission, a partnership with the US Embassy, facilitated by the Power Meri film project, has allowed Voice Against Violence to expand its footprint across the rugby league-mad nation.

In 2019, Voice Against Violence reached nearly 500 participants from 20 rugby league teams across six regions of PNG, including in remote areas of the highlands where the prevalence of gender-based violence is one of the community’s greatest concerns.

‘It’s very challenging in some of those areas, because the social norms people were brought up with make it harder for them to respect the opposite sex and other people living around them,” Neap revealed. “But, from what I have seen delivering this program, sport truly can be used to promote respect.”

Based on its success in PNG (the program was a top-three finalist for ‘Development-and-Peace-through-Sport program of the year’ at the international Peace and Sport Awards in 2019), Voice Against Violence has been extended to other Pacific countries

While the program was originally developed for use in Australia by former Canberra Raiders captain Alan Tongue (who was named ACT Australian of the Year in 2017 for his efforts in using rugby league to address gender-based violence), the NRL works with expert partners to adapt the program and its messaging to suit each Pacific nation.

Voice Against Violence launched in Tonga in 2018, where the NRL partnered with six organisations that specialise in addressing family violence to co-deliver the program.

“Domestic violence is a major issue here and I believe we can reduce that by helping young people understand the effects of violence within the family and the community. The experienced service providers we work with are very supportive of the program, because using sport as a tool to deliver our messages is very powerful.”

“We no longer want this to be a taboo topic. We want people to talk about it, be aware of the issue, and know that their voice matters,” she said.