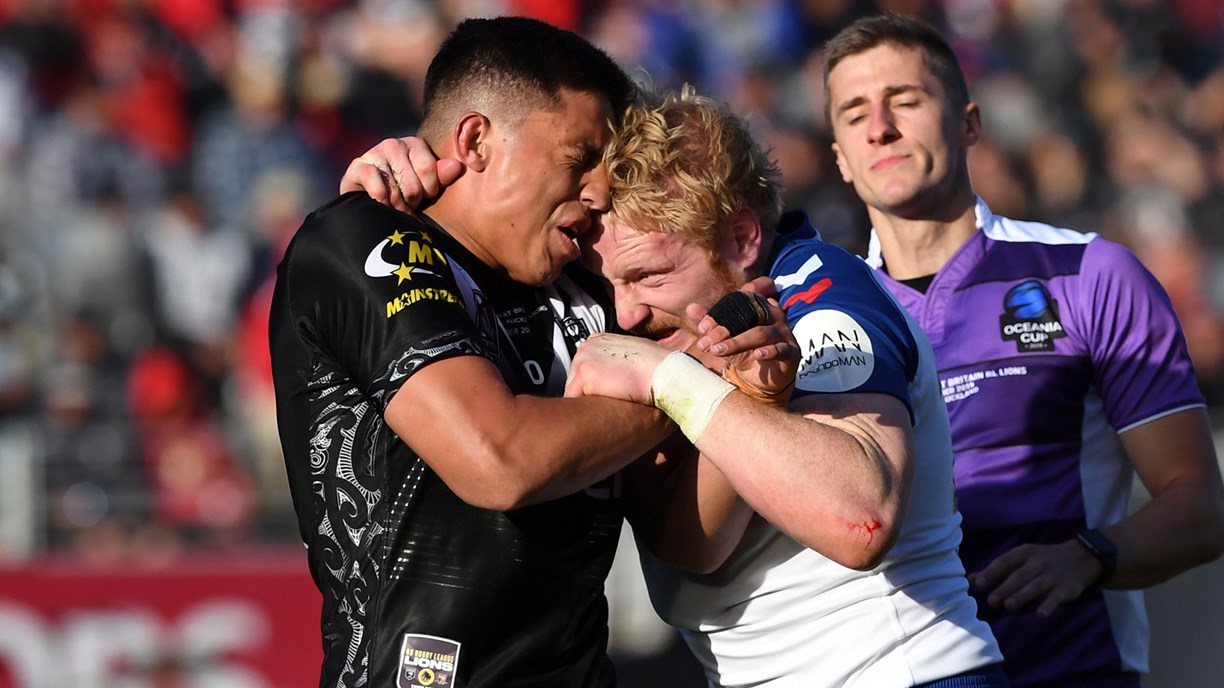 By Margie McDonald and Brad Walter

A rousing half-time speech from coach Michael Maguire seemed to do the trick as New Zealand defied the loss of Kieran Foran to hand Great Britain their second defeat in a row on their southern hemisphere tour with a 12-8 win at Auckland’s Eden Park on Saturday.

Maguire was seen on the dressing room cameras having a highly animated discussion with his players after a try-less first half. The message obviously hit the mark with the Kiwis executing a little better in the second, even though errors did creep in at times.

Wayne Bennett’s men couldn’t come up with the plays to break the Kiwis line often enough, although a try late in the second half to move them within four points made for a nail-biting finish.

But when Lions winger Jermaine McGillvary lost control of the ball over the line, after a bone-jolting tackle by Kenny Bromwich, the fight faded in the Great Britain side.

After a 14-6 loss to Tonga a week ago, the Lions now look toward Christchurch next Saturday (November 9) for a second crack at New Zealand.

The Kiwis suffered an early blow losing five-eighth Foran in the sixth minute to a dislocated shoulder. He was third man in for a regulation tackle on Great Britain lock James Graham.

Foran came out of the tackle clutching his left shoulder and after being attended to by a trainer, he left the field in a fair degree of pain. He returned to sit on the sideline with his arm tucked up inside his warm-up jacket.

Melbourne’s Jahrome Hughes came off the bench and joined Benji Marshall in the halves.

“Just seeing the emotion in the sheds, he has done a lot of work to get back to this point and it was probably the most stable I have seen him, not only with his body but mentally as well,” Marshall said of Foran.

“I thought he had a great couple of weeks’ preparation and he was just peaking for this game.

“I could see how much it meant to him. He is one of our brothers and we are just hurting for him.

“I thought we showed a lot of effort [without Foran]. When you lose a half you have to change a lot of your structure. I thought Jerome did a solid job for not training there all week, he trained at hooker all week. Sometimes you have got to just do your job and the boys did that.

“Sometimes it takes just one moment to win a game and that moment was there for Kenny today.”

“I’m really shattered for Foz, he is a champion of a fella. He has obviously been through a bit in his time, he has bounced back and no doubt he will respond to this one,” New Zealand coach Michael Maguire said.

“We were all looking forward to seeing him play. I think everyone realises what he has endured in the last couple of years. We will rally around him and make sure we get him back.”

The Kiwis had already had disruption to the playing group with hooker Brandon Smith dropped from the starting line-up for failing to “meet team standards” according to former Kiwis winger and now Sky Sports television commentator Daryl Halligan.

The Kiwis drafted in former Broncos and now Warriors half Kodi Nikorima in the No.21 jersey on Saturday morning. He went straight into the No.9 role without the benefit of a captain’s run.

Despite all the upheaval, New Zealand opened the scoring with a Jamayne Isaako penalty in the seventh minute after Josh Hodgson was pinged for slowing down the ruck. Gareth Widdop replied for Great Britain and the score remained 2-2 until the half-time whistle.

A break upfield by Joey Manu, who had Marshall in support, looked like producing the first try of the game in the 39th minute. But the movement broke down inside the Lions’ 10-metre zone.

In the second half, the man most likely to do something did it when Roger Tuivasa-Sheck broke through two defenders, tried to step fullback Jonny Lomax, but still managed to get the ball to Isaako who ran unchallenged to the line.

It sparked something in the Kiwis camp as it looked like they’d scored again two minutes later, when Briton Nikora chased through a Marshall kick. But replays showed he had knocked on in the lead-up.

They didn’t have to wait long though as bench forward Corey Harawira-Naera jostled with four defenders before grounding the ball under the posts. Isaako hadn’t converted his own try but didn’t miss this time and it was 12-2.

But still the Lions couldn’t score off the two extra sets given to them.

Interchange forward Daryl Clark did barge his way over in the 68th minute after spinning out of Manu’s tackle and with Widdop’s conversion suddenly things got more interesting at 12-8. In the end it wasn’t enough.

Long-time Kiwis servant Adam Blair got to celebrate his 50th Test in style after leading the team out onto the park and giving a spine-chilling version of the Haka.