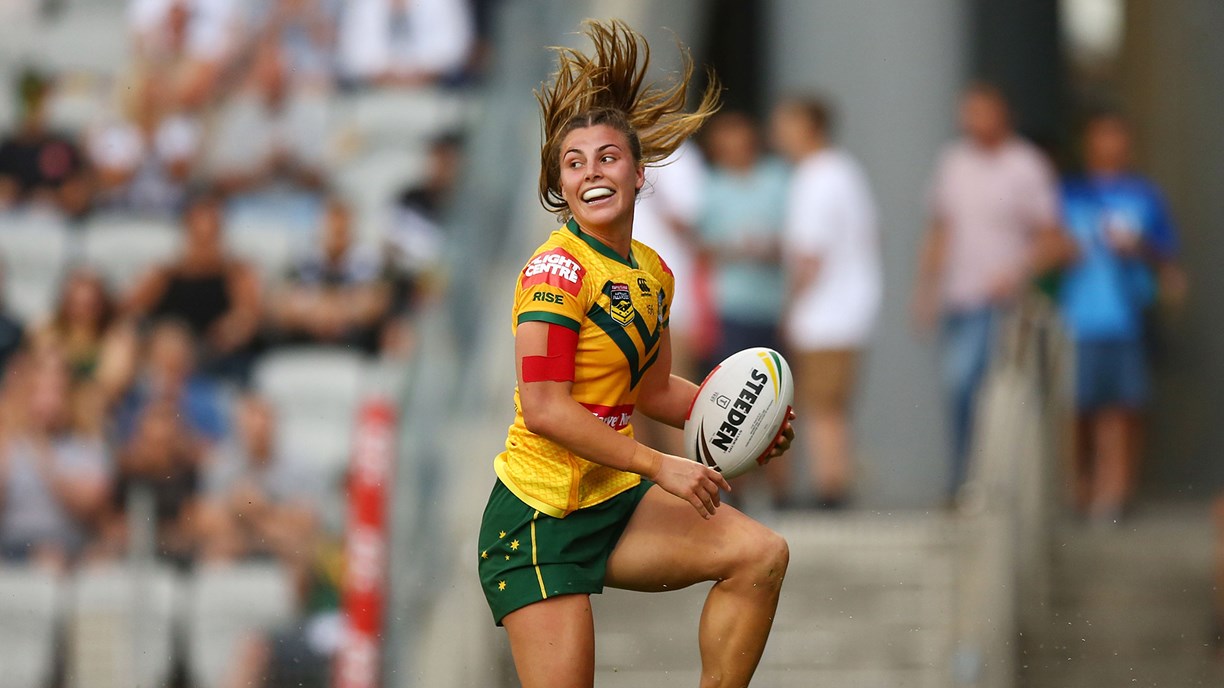 Jillaroos bounce back from Nines defeat to thump Kiwi Ferns

Ali Brigginshaw once again showed her class on the international stage to help guide the Australian Jillaroos to a 28-8 victory over the Kiwi Ferns at WIN Stadium.

Brigginshaw backed up a week of verbal exchanges with the New Zealand counterparts to orchestrate a controlling performance in the only Test for the world champions this year.

The Australian captain had strong support around her with local talents Jess Sergis and Kezie Apps impressing on home turf.

The Kiwi Ferns had all the running early but couldn’t convert territory into points with a try-saver from Tiana Penitani highlighting the Jillaroos’ defensive attitude in the opening stages.

A treble of penalties relieved pressure for the Australians and it didn’t take long for Brigginshaw to strike with a weaving run before finding Tallisha Harden in support.

The Jillaroos went over for their second within minutes with Brigginshaw regathering her own short kick – New Zealand fullback Apii Nicholls conceding a penalty try in the process for reach out with her leg.

Australia’s momentum continued with a slice of luck from the scrum base with debutante Kirra Dibb placing a 40-metre kick down-field which landed perfectly in the hands of Sergis to score under the posts.

An error from the Jillaroos at the kick restart opened the door for the Kiwi Ferns to get on the board midway through the first half with Maitua Feterika continuing where she left off from the NRLW to steamroll her way over from close range.

A penalty goal to the Jillaroos on the stroke of half-time enabled the home side to take a 18-4 lead into the break.

Honey Hireme’s battle with Sergis was one-way in the opening half but the Kiwi Ferns veteran returned serve three minutes after the interval to finish off a sharp backline movement.

New Zealand were denied another try-scoring chance when Hannah Southwell pulled off a miraculous saver on Raecene McGregor close to the line.

Local girl Keeley Davis went close for the Jillaroos at the other end of the field but was ruled held up as the scoreline remained a 10-point difference for most of the second half.

The Kiwi Ferns lost Nita Maynard to a head knock and the Jillaroos had woes of their own when Penitani spilt a ball with the line wide open with 16 minutes remaining.

Australia wrapped up the result through another local, Shellharbour’s Shakiah Tungai, who converted her own long-range special near full-time in front of a strong crowd of 8184.