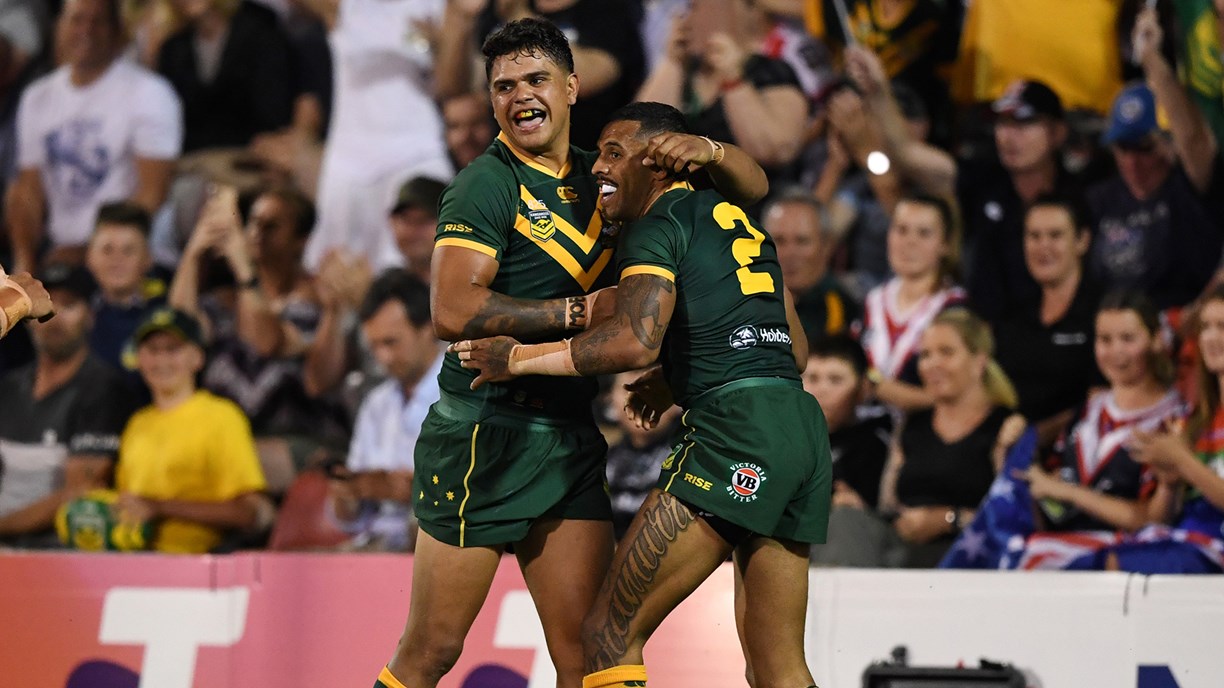 Damien Cook celebrated his homecoming by spearheading a new-look Kangaroos side to an impressive 26-4 win over New Zealand in front of 18,104 fans at WIN Stadium on Friday night.

Cook, who grew up at Helensburgh and was a member of Stanwell Park Surf Lifesaving Club, broke the Kiwis’ hearts with a 70-metre intercept try midway through the second half and later used his speed from dummy half to put James Tedesco over to seal the win.

“It is pretty special just to wear this jersey whenever you can and to get man-of-the-match it’s a team achievement, I’m just the lucky one who gets to go up there and get the medal,” Cook said. “It was very exciting to play this week, I was looking forward to it.”

It was a clinical performance by the Kangaroos to avenge last year’s Test loss to New Zealand in Auckland and put them in the box seat to secure the inaugural Oceania Cup Trophy if they can beat Tonga next Saturday at Eden Park.

In some ways the Kiwis could feel they were unlucky as two of Australia’s first three tries were scored from intercepts but they didn’t create enough opportunities to seriously trouble Australia.

With the Kiwis missing props Jesse Bromwich, Nelson Asofa-Solomona and James Fisher-Harris, it was no surprise that Australia fancied their chances in the middle and Kangaroos coach Mal Meninga chose two front-rowers on the bench.

Canberra prop Josh Papalii, the only survivor from Meninga’s first Test team in 2016, was a powerhouse, despite carrying a rib cartilage injury into the game.

Papalii ran 80 metres from seven carries with the ball in his first 23-minute stint before being replaced by Payne Haas.

One of five debutants in the Australian team, Haas is the youngest forward to wear the green-and-gold jersey since Brad Fittler in 1990 and he made a stunning first-up impression as he carried the ball for 102 metres from just seven runs before half-time.

By the end of his 37-minute stint, 19-year-old Haas had ran the ball for 174 metres from 13 carries – the most by any forward on either side.

David Klemmer ran the ball for 154 metres, while Papalii finished the game with 145 metres and interchange prop Paul Vaughan, another debutant, ran for 120 metres.

“We did take them on in the middle, we won that battle really well,” Australian coach Mal Meninga said. “Payne and Paul Vaughan off the bench kept the momentum going that Josh Papalii and Dave Klemmer gave us.

“I thought our forwards were exceptional and then on the back of that we had Cookie with a man-of-the-match performance.”

The Kangaroos posted first points when centre Latrell Mitchell landed an eighth minute penalty goal and they looked set to go further ahead after Papalii put Jake Trbojevic over in the 15th minute but the Manly lock knocked on.

However, there was no doubt when Mitchell intercepted a floating pass from Shaun Johnson 20 metres out from the Australian line and sent winger Josh Addo-Carr racing away for his first Test try in the 20th minute.

Kangaroos second-rower Tyson Frizell then put the home side further ahead in the 27th minute when he stepped Marshall after receiving the ball on the New Zealand tryline and dived over to score.

Charnze Nicoll-Klokstad got the Kiwis on the scoreboard when he powered over out wide after Roger Tuivasa-Sheck chimed into the backline from a 35th minute scrum win but it was the only points New Zealand managed all night.

Their best scoring chance in the second half came in the 54th minute as the Kiwis threw the ball around near the Australian line but Cook struck a huge blow when he intercepted an Adam Blair pass and ran 70 metres to score.

Cook was at his electrifying best again five minutes later when he burst out of dummy half and exposed some tired marker defence before finding James Tedesco to score under the posts.

Trbojevic had another try disallowed late in the match and a 76th minute Daly Cherry-Evans penalty goal completed the scoring.