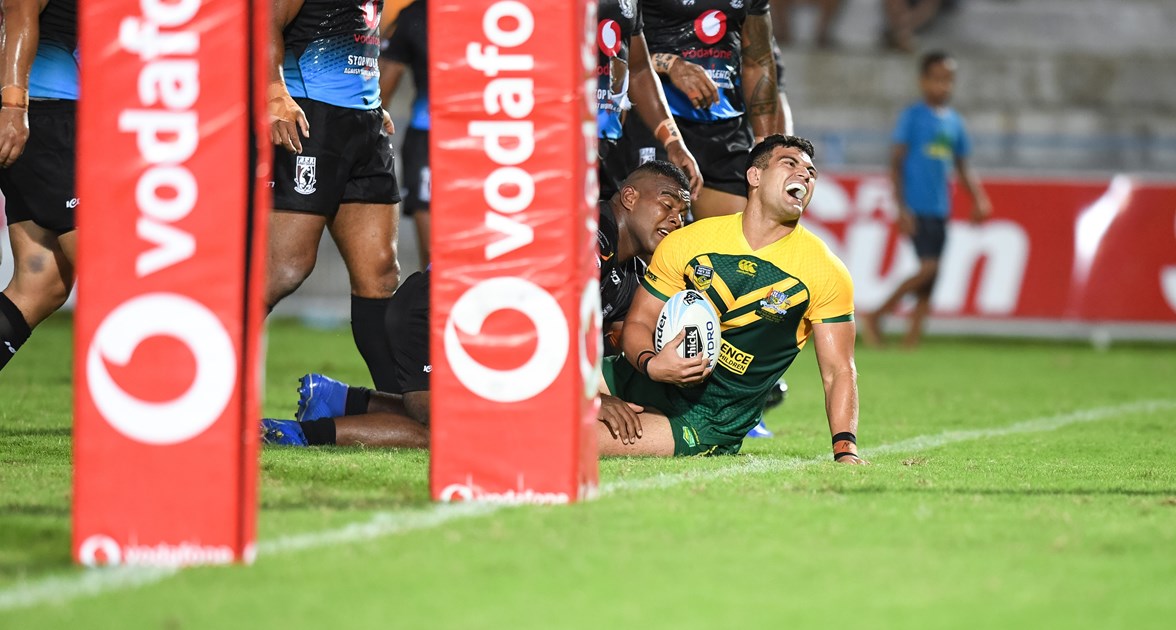 Parramatta fullback Clint Gutherson has warmed up to the World 9s next week in style with three tries as the Australian Prime Minister’s XIII romped to a 52-10 victory over an inexperienced Fijian outfit in Suva on Friday night.

But it was Gutherson who stood out with a treble and two try assists in front of a modest and disappointing crowd of roughly 3000 in attendance at ANZ National Stadium.

“We’ve enjoyed it and the physicality of the game was good and is something we needed leading into some major events and to blow the cobwebs out,” Meninga said.

“A 40- or 50-point win isn’t something you want but it’s really important we play these sort of games and engage people. We’ve got some fantastic Fijian players in the NRL that unfortunately didn’t play tonight but these locals have dreams to play at a higher level and the only way they’ll be able to do that is against the best.”

The Aussies took just 45 seconds to get on the board via Kyle Feldt and despite Fiji’s best efforts they were no match without the likes of NRL stars Viliame Kikau, Suliasi Vunivalu and Parramatta sensation Maika Sivo.

Tries to Payne Haas and Campbell Graham in short fashion extended the lead to 14-0 for Meninga’s men but the Bati outfit got a breakthrough just before the quarter time break to go over in the corner via Ropate Tobe.

Gutherson and Mitchell Moses combined for Australia’s next two tries as the visitors went further ahead and cruise to a 26-4 half-time lead.

Gutherson sent Feldt over for a double after the break before crossing for his third following a Reuben Garrick bust on the left edge.

The Fijians burrowed their way over for their second through hooker Apimeleki Lutu as Meninga continued to rotate his extended squad.

Tries to Wests Tigers centre Paul Momirovski and Sea Eagles flyer Reuben Garrick pushed the side further ahead, before Broncos prop David Fifita scored with a 60-metre run to the dive over in the corner and Cody Walker capped off the night with a try in the final minute.

Earlier, the PM’s XIII side were presented their jerseys by Australian Prime Minster Scott Morrison, who was in attendance for the clash and bringing with him an entourage of political media interest.

Morrison ran the drinks midway through the second half as part of his visit to strengthen Australia’s relationships with the Fijian government and community.

“To back up [from the NRL season] and be part of this, every time you put on the green and gold is a great credit to you and a great honour to do,” Morrison told the Australian players before kick-off.

“Here you’re doing it not just as great rugby league players and great professionals in sport, but you’re doing it as an important cause for our country. Our relationship with the Pacific is so important.”