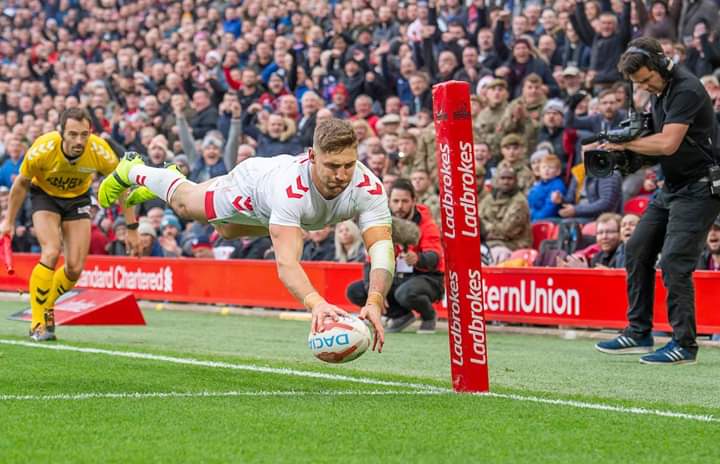 England have fought back from an eight-point deficit in the second half to score three tries and seal the series win with a 20-14 victory over the Kiwis in the second Test at Anfield on Sunday.

Tommy Makinson crossed for a hat-trick of tries in the dramatic win after the Kiwis jumped out to a 14-6 advantage midway through the second half.

Makinson broke the 14-14 deadlock with six minutes left on the clock with a sharp and weaving effort coming back inside the Kiwis’ ruck to charge over the line, using fingertip control to ground the ball, which was reviewed by the video referee.

Two errors midway through the second half swung the momentum for England with opposite Makinson’s second try and Jake Connor’s four-pointer ensuring the game was set up for a grandstand finish with a strong effort down the short side.

The Kiwis will rue their inability to score points in the opening half with the scores level at 6-6 at the break. The visitors had three disallowed tries and had a weight of possession and territory behind them.

The tone of the clash was set from the start as both teams came together in the early stages after Jesse Bromwich was penalised for a tackle on Sam Tomkins. enabling Connor to put England 2-0 ahead.

When the game eventually got into a groove, the Kiwis looked the strongest early to dominate in most areas but failed to convert enough opportunities into points after their first try.

The visitors made light work of England’s defence in the eighth minute with a back-line movement finished off by Watene-Zelezniak, who split Tomkins and Oliver Gildart on the left edge.

England toiled and struck before the interval in similar fashion to last week’s clash in Hull with Makinson finishing off a slick cut-out pass from George Williams for his first of the afternoon.

Kiwi back rower Kevin Proctor was next to be denied by some brutal England defence as three disallowed tries failed to offer a true reflection of the dominance Michael Maguire’s side generated in the opening half.

The Kiwis skipped ahead with a converted try and penalty goal nine minutes into the second half.

Kodi Nikorima linked with Watene-Zelezniak to split the defence and send Ken Maumalo over in the corner, before an offside call on the line enabled the Kiwis an additional two points.

But England rallied, as they did in Hull with the Anfield crowd sniffing a comeback.

They went delirious as a Tomkins kick was fumbled in-goal but the Kiwis held their nerve to deny a charging Tom Burgess, who spilled the ball over the line.

Another error allowed England to level the scores with a short-side play from Canberra pair Hodgson and Whitehead sending Connor over in the corner.

The comeback was complete late, handing England a 2-0 series win and the Baskerville Shield.