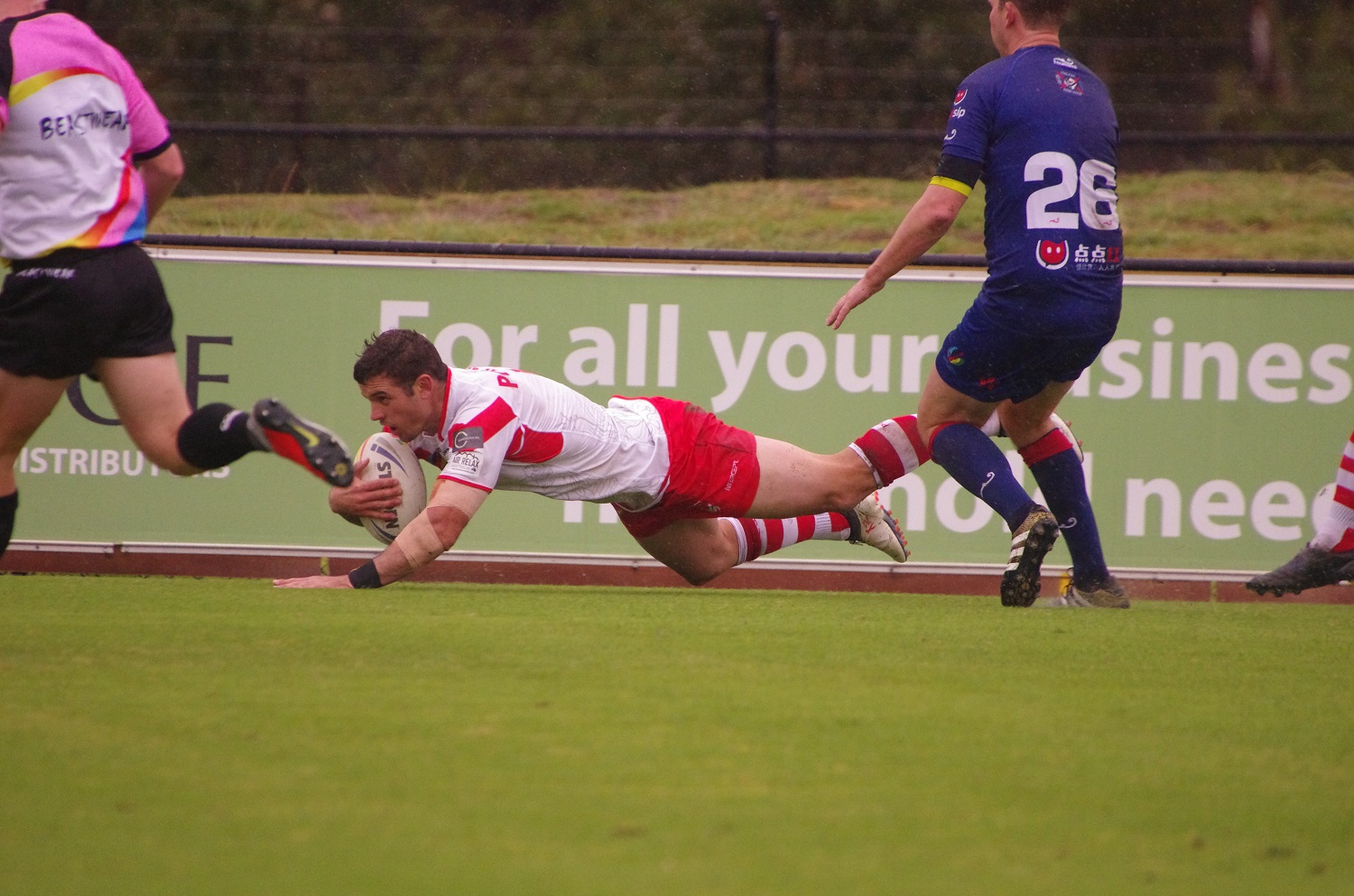 Game six of the Rugby League Emerging Nations World Championship had Hong Kong Rugby League taking on the Polish Rugby League side in some wet and miserable conditions.

It was an evenly fought opening 10 minutes of the game as both teams had their opportunities early.

An error by Hong Kong let Poland off the hook before Poland worked their way into an attacking set and got the scoring going for the game.

Star half Harry Siejka showed his skills early on with a bit of footwork before throwing the over the top cut out to his centre Simon Maslanka who went over in the corner. The conversion was missed by Harry Siejka.

Poland were quick to go on the attack once again and insert their early dominance by stacking on more points.

With a few repeat sets coming their way, the Hong Kong defence cracked again when Poland scored off an almost identical set piece that they scored off last time, but this time on the opposite side.

Five-Eighth Jonah Metuangaro took on the defensive line and launched a beautiful cut out pass to his winger in Robert Mykietyn to push his way over near the left side corner post.

Although having a rough time from the tee with the conversions, Harry Siejka showed his superb kicking skills when he launched a brilliant 40/20 to once again put Poland in an attacking position.

The Polish boys were able to take full advantage of the attacking position when they shot out to a quick 12-0 lead courtesy of Chippie Korostchuk, who grabbed himself a try when he was hit with a beautiful short ball by his five-eighth, Jonah Metuangaro.

The conversion was missed again by Harry Siejka.

Poland grabbed their fourth try in half an hour thanks to the big back rower grabbing himself a quick double.

Chippie Korostchuk ran another ideal line as he sliced through the defence at speed while being hit with yet another brilliant short ball by Jonah Metuangaro.

Harry Siejka was replaced by Ethan Niszczot in the kicking duties, who slotted the conversion for a 18-0 lead.

Hong Kong were struggling to get their hands on the ball and it continued to get worse for them.

Line breaks once again getting Poland into an attacking position and just like the previous attacking sets it led to another Polish try when Jonah Metuangaro threw the dummy and stepped his way through the defensive line to go over and score the try.

Ethan Niszczot converted from in front for a 24-0 lead.

As we entered the final few minutes of the half, Hong Kong were able to get a few sets without conceding a try, however as they started gaining possession they handed it straight back through an attacking penalty.

Hong Kong hooker, Craig McMurrich, was penalised and sin binned for what appeared to be dissent.

The sin bin resulted in Poland having the man advantage and they grabbed a try on half time when winger Michal Maslanka jumped out of dummy half and took off before finding his open centre Simon Maslanka who was off to the races for a 50 metre sprint to the try line.

The conversion was missed by Ethan Niszczot as Poland went into the half time break up 28-0.

The second half started perfectly for Hong Kong as an early 40/20 by fullback Matthew Waugh resulted in the first try for the half.

Hooker Craig McMurrich came back on after returning from his sin binning and made up for it instantly when he dived over out of dummy half, which was converted by by Richard Lindsay.

Poland were able to respond quickly with two quick tries.

After bagging and early double, Chippie Korostchuk was able to show his play making skills, popping up the ball for his fullback, Ethan Niszczot, who flew through the defence for a try.

He was able to convert his own try from the sideline.

Poland’s second try of the half was almost a repeat of the previous one, with Korostchuk once again popping up the ball, this time to his five-eight in Janah Metuangaro who wrapped around and threw another killer cut out pass to winger Robert Mykietyn for the try.

Ethan Niszczot converted another beauty from the sideline.

Hong Kong Hooker Craig McMurrich had already been sin binned and was then sent off, then Poland were able to take the score out to 44-6 when they scored a simple one in the corner by winger Michal Maslanka.

The Polish side were able to hit the half century after lock Norbert Balacinski broke through the Hong Kong line and charged off down field, he was brought down just short of the line, but five-eight Jonah Metuangaro was able to finish it off with his classy footwork.

Poland went over again after that which was a result of the Hong Kong team simply showing to much fatigue. Chippie Korostchuk broke through the tired Hong Kong line and found Simon Maslanka in support who then passed it off to his brother Michal Maslanka to score in the right hand corner.

Both conversions were successful by Ethan Niszczot.

Poland finally finished it all off with a try on the fulltime buzzer, which created a hat trick for the man of the match, Chippie Korostchuk.