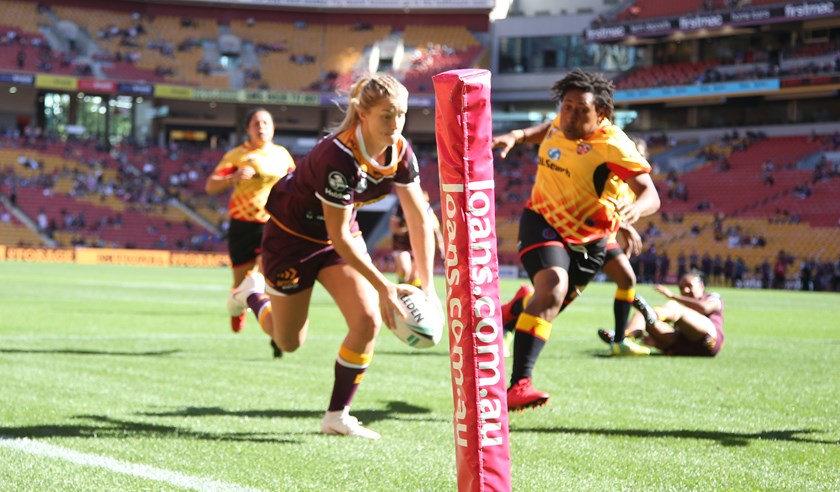 Broncos too strong for Orchids in Brisbane

On a blue sky Father’s Day it was the Brisbane Broncos women who celebrated in style with an emphatic 48-14 trial victory over the PNG Orchids at Suncorp Stadium.

As captain and halfback Ali Brigginshaw led her team onto the field in Brisbane jerseys for the first time to the strains of club song ‘Let’s Go Broncos’ it was a victory for the sisters, mothers, daughters, girlfriends and wives who have all sacrificed so much to make the moment possible.

Brigginshaw, one of the best players in the women’s game, led her side with distinction in a game where skill, speed and heavy contact featured.

Tough Broncos prop Heather Ballinger was smashed in the first hit-up of the game by PNG lock Tahina Booth. Ballinger was on the ground for a worrying minute but was soon back up.

Centre Amelia Kuk scored the first ever try for the Broncos women when halves Brigginshaw and Kimiora Nati combined nicely in a sweeping left to right backline movement.

The Brisbane halves were at it again soon afterwards to put Queensland representative player of the year Steph Hancock over.

The Broncos lost Kody House to a HIA in a friendly fire head clash with Meg Ward as they went to make a tackle on PNG centre Naomi Kaupa as she went in to score.

Brisbane fullback Chelsea Baker crossed for a double, the second a scintillating 65m try after a nifty offload from Hancock. Julia Robinson also scored after Baker chimed into the backline and threw a superb pass.

The 26-4 half-time lead was extended soon after the break by the Broncos when Ward crossed in the corner.

The Broncos had weapons on the flanks in more ways than one with Robinson and Ward both serving in the defence force, the former in the army and the latter in the air force.

Five-eighth Nati held up her pass to perfection and Fotu-Moala, famously nicknamed ‘The Jukebox’ by Darren Lockyer because “her hits just keep coming”, scored a cracker.

Orchids prop Elsie Albert went in for a well deserved try before Kuk scored the four-pointer of the match for Brisbane after Karley Te Kawa beat 10 defenders and the referee in a zig-zag run of 100m.

The trial win was a prelude for the Broncos ahead of the Holden NRL Women’s Premiership which starts in a week.

The combination of Brigginshaw and Nati in the halves will please coach Paul Dyer as will the speed of his backline and the power of his star-studded pack.

The girls from both sides reigned supreme on Father’s Day, and no doubt did their dad’s proud in the process in front of an appreciative crowd of 9,938 spectators.