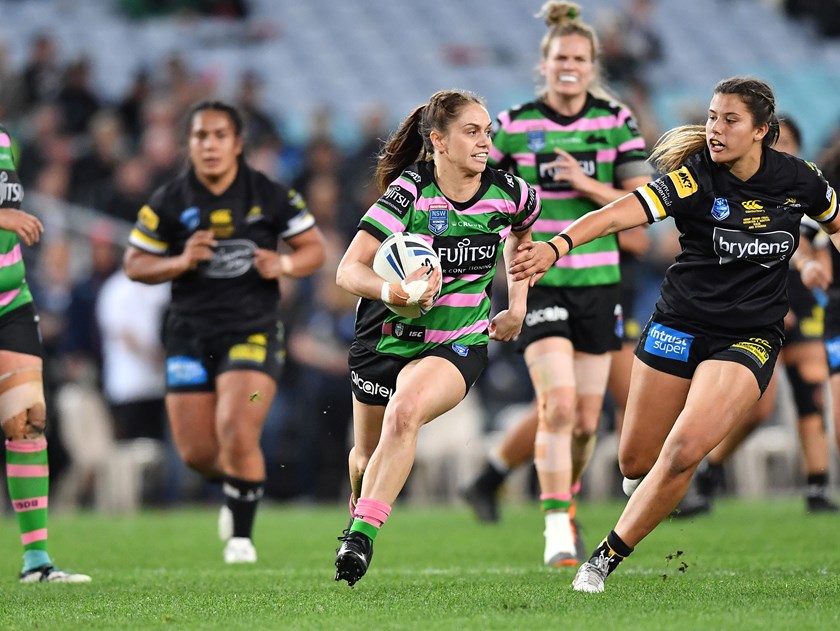 Minor premiers at the end of the regular season, the Rabbitohs fell in a tight contest – Mounties backing up their Finals Week Two win over South Sydney in a near-identical fashion.

In a high-quality match from near go-to-woe, the early exchanges were error-filled as nerves took over both sides. But finding their rhythm on the back of it was the Rabbitohs first to settle and to strike on the scoreboard.

A brave right-to-left shift – just 10 metres from their own goal-line – had Taleena Simon into space, and the fleet-of-foot winger did the rest to score.

Simon turned on the speed and left would-be trailers in her wake, improving her position to ensure an easier shot on goal for halfback Maddie Studdon. The Rabbitohs No.7 made no mistake from near in front of the uprights to see the Rabbitohs to a 6-0 front.

The South Sydney lead was short-lived though, as Mounties turned to their NSW Origin star Simaima Taufa to get them back into the contest.

And as she did in Week Two of the finals series, Taufa burrowed her way between defenders and over the line to see her side back into the match. Janelle Williams converted to level the scores at 6-6.

In a tit-for-tat opening 15 minutes, again the Rabbitohs hit the front and did so courtesy of Sharon McGrady.

Deep on the attack, South Sydney looked likely to roll a grubbing kick into the in-goal area, but caught the Mounties defence unawares with a backline shift on the last play of the set. McGrady finished the play off to score, however Studdon couldn’t add the extras from out wide as the score remained 10-6.

As time ticked away towards half-time, Mounties found a reprieve when a ‘knock-on’ call against the Rabbitohs fell in their favour.

As Taufa attracted numbers to the middle-third of the field, Patricia Raikadroka caught the South Sydney defence short as she cut back in against the grain. The light-stepping centre found her way over the line to take the score to 10-10 – and that’s the way it would remain at the break as Williams sprayed the ensuing shot on goal.

In a second period where both sides had long spells of possession, 25 minutes had passed before the first points of the half were registered.

In a near-identical play to one that proved decisive a fortnight previously, Woodman jumped out of dummy-half to catch the markers not square.

The referee’s whistle signalled a penalty, and Williams obliged to see Mounties to the 12-10 lead.

The penalty kick the difference in the end, as Mounties hung on to register their maiden Harvey Norman NSW Women’s Premiership title.