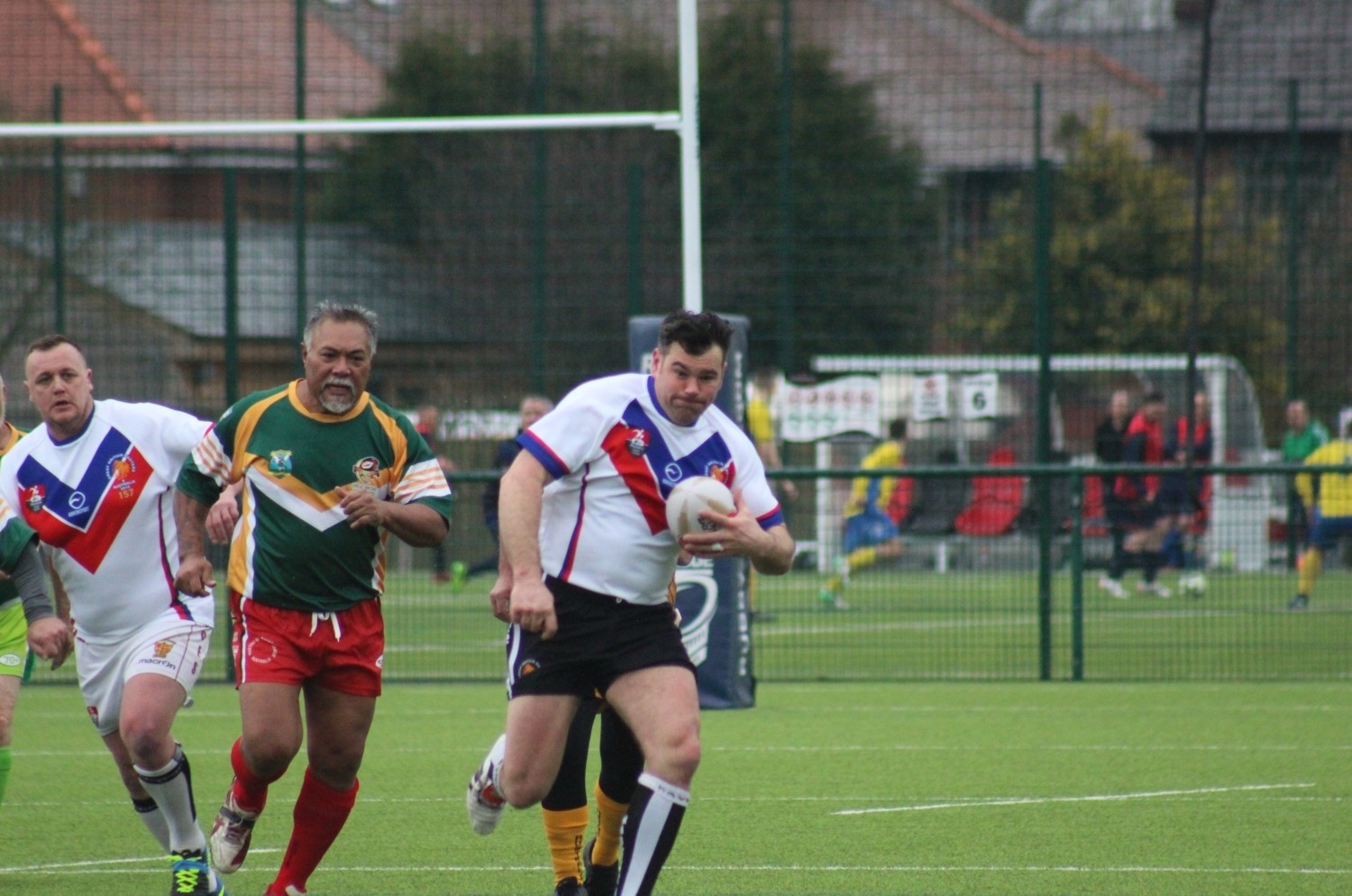 The large number of supporters who turned out for a full afternoon on Rugby League at Leigh East were treated to the best in junior and of course Masters Rugby League.

The early day curtain raiser saw Leigh East Masters taken on a Lancashire/NW Select XIII in a game full of skill and laughter.

The pre-international curtain raiser was the opportunity for the u13s of Leigh Easts and Bank Quay to show off their skills to the appreciative crowd: these are the Masters of the future!

The main event was, of course, the two international games between Great Britain and Australia: two games as the Australian touring party is the biggest ever and as Masters we want every to be included.

All players marched out led by referees, Paul Field and Martin Flynn, lining up for a minute’s silence in memory of the “Father of Masters” Phil Campbell who died in New Zealand, together with those relations of a number GB and Australian players, all of whom passed away last week.

The national anthems were sung with gusto and pride as the teams prepared to play international Masters Rugby League.

The games provided some excellent enjoyment for the players and the spectators who were in good voice!

With both games being stream live by the RFL website, the atmosphere was electric as the first game kicked off the internationals.

The first game was very closely contested with some excellent flowing moves and stubborn defence by both teams.

The second game showed the toll being on tour, playing matches close together, takes on a touring team.

The Australian Masters made full use of the unlimited interchanges to play their part in a great game.

Over the two games, there were some excellent tries: two notable examples for Australia, Peter Rigg scoring a well worked team try and green shorts Tony Witt scoring a sneaky try from two yards out! For Great Britain, two stand out tries were the last-minute interception and 90 m try by Blackpool’s Terry Whitelow and an 80m breakaway try from W Cumbria’s Graham Gilpin.

The players selected for Great Britain were all still buzzing well after the games.

The general sentiment is well expressed by Hindpool’s Graham Shaw: “Brilliant day taking on the Australians. I never thought 18 months ago, I’d be enjoying playing Rugby League again, let alone representing my country. Masters has been great to me.”

The after-match presentations, which took place in a very full and noisy clubhouse, saw awards for Man of the Match to GB’s Jason Greenwood-McDonald and Graham Gilpin and to Australia’s Tony Witt and Mike Cross. Australian Masters CEO, Malcolm Duncan, made a special “Spirit of Masters” to GB coach Paul Royston.

The Australian tourist now move on the Hull on Wednesday and finish their tour at London Silverbacks on Saturday 17th.