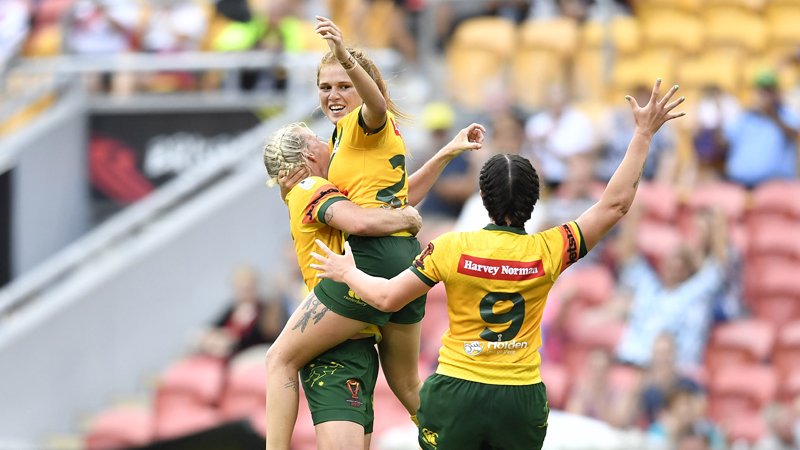 The Australian Jillaroos have won the 2017 Rugby League Women’s World Cup after surviving a physical encounter with the New Zealand Kiwi Ferns to finish champions 23-16.

A field goal on the stroke of fulltime from Australian livewire, Caitlyn Moran sealed the game for the Jillaroos after holding off a late surge from a determined Kiwi ferns outfit.

Moran also bagged a double in the match which laid the platform for the Jillaroos to build a lead after spending much of the first half fending off New Zealand attacks.

As soon as play got underway, the Ferns flexed their muscles and tried to put the jillaroos on the back foot by sending their powerful forwards up the middle to try and gain some early momentum.

But despite controlling the opening minutes of the game, some brilliant creative play from the Jillaroos resulted in the first points of the final.

With two defenders on her back, Renae Kunst managed to get an offload to fullback Nakia Davis-Welsh who flew downfield before drawing the Kiwi fullback and finding Isabelle Kelly unmarked who crossed over for a brilliant team try.

Caitlyn Moran made no mistakes adding the extras to give Australia an early 6-0 lead just eight minutes into the match.

But New Zealand wouldn’t stay behind for long turning to Honey Hireme, who got her first of the day to level the scores just four minutes later.

Now with some momentum behind them, the Ferns started to regain control of the match with some quick line speed preventing the Jillaroos from moving up the field.

And as the clocked ticked into the back end of the first half, Hireme once again gave New Zealand the upper hand after she forced her way over for her second try of the day.

Despite dominating for most of the first half, New Zealand only held onto a slim 10-6 advantage before Australia finally broke through on the verge of halftime.

As she has done all tournament, Moran zigged and zagged her way to the try line and planted the ball down beside the posts before converting her own try to give the Jillaroos an unexpected 12-10 lead heading into the second half.

As both teams took the field for the final 40 minutes of the 2017 Rugby League Women’s World Cup, the match was still well and truly anyone’s for the taking.

And it was the Jillaroos who took control of the match following play getting underway, landing a swift double blow within four minutes of each other to gain a firm grasp on the game.

The first came from an Ali Brigginshaw grubber kick which deflected off a New Zealand defender, bouncing up perfectly Kelly who was in pursuit and put the ball down under the posts for her second try.

Then just four minutes later, forward Elianna Walton forced her way over next to the posts to give Australia a 22-10 lead with a little over 20 minutes yet to play.

But New Zealand were far from done and after finally making their way back down the right end of the field, New Zealand got themselves back into the match.

The Ferns moved the ball through the hands using quick passes and offloads to break up the Australian defence before Raecene McGregor finally found a way over the try line.

As the game moved into the final 10 minutes and with just one converted try the difference, the energy of both teams lifted as they could sense a World Cup victory was just one play away.

And that play would come from two-try hero, Caitlyn Moran, who slotted a field goal from 15 meters out on the stroke of full time to secure a second straight Rugby League Women’s World Cup for Australia, finishing champions 23-16.