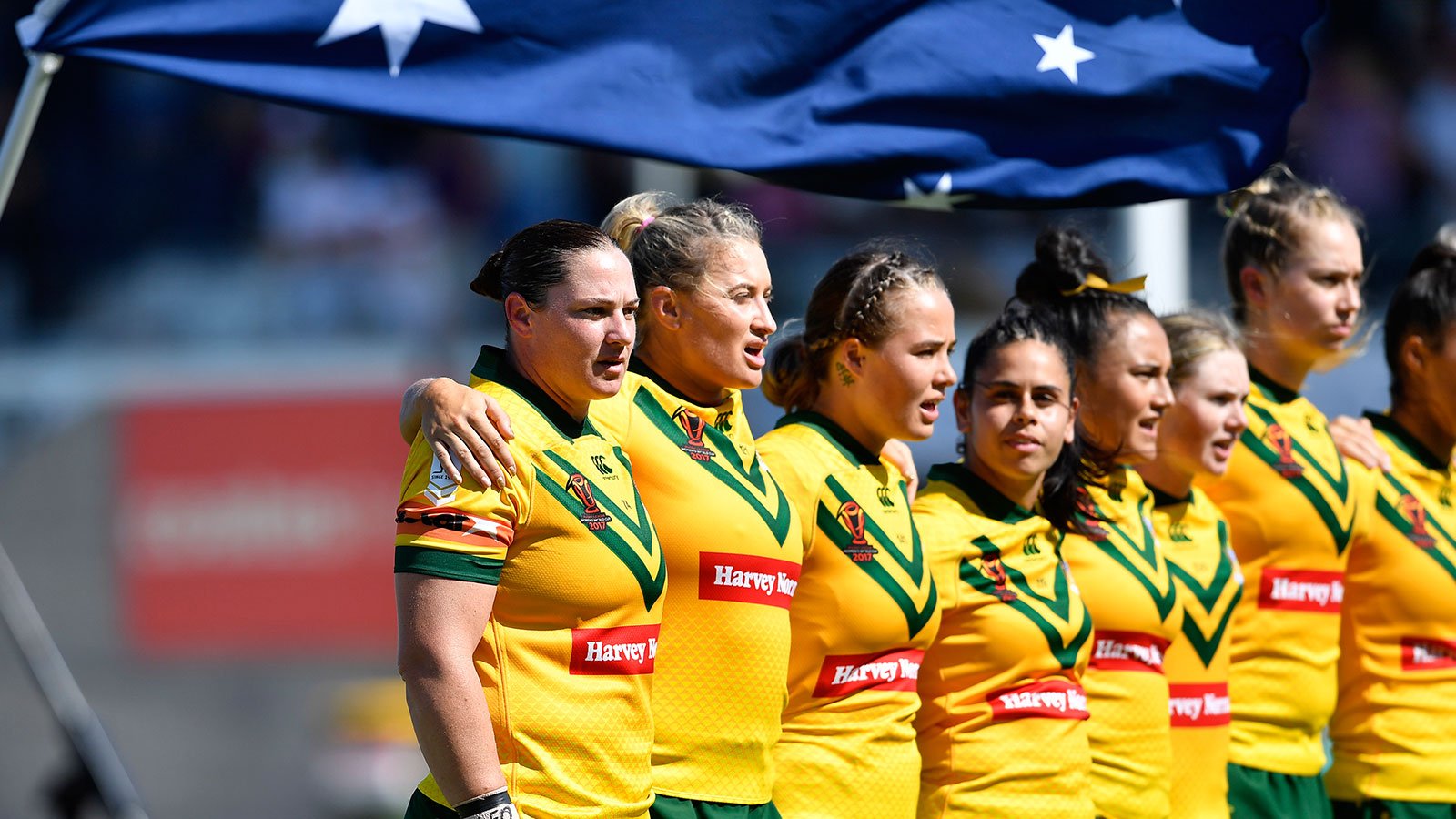 Australian Jillaroos have booked their place in the 2017 Women’s World Cup final with a 58-6 victory over Canada in the second semi-final at Southern Cross Group Stadium.

Doubles to Stephanie Hancock, Karina Brown, Ali Brigginshaw and Isabelle Kelly set up the win in a 10-line-breaks-to-one performance.

After thrashing the Ravens 88-0 four days prior, the Jillaroos came out firing to set up a sizeable lead in the opening half but struggled to maintain the momentum in the third quarter with a series of errors the only concern for coach Brad Donald leading into next week’s final against New Zealand.

The Kiwi Ferns put England to the sword 42-4 in the earlier clash to set up a 2013 final rematch in Brisbane next Saturday.

Australia opened the scoring in the second minute when Brigginshaw regathered her own kick for a try after an unfortunate bounce got passed Canadian fullback Irene Patrinos in-goal.

Some quick hands from Brittany Breayley sent Hancock over for the Jillaroos’ second try four minutes later, with the Queensland prop carrying five defenders with her as she planted the ball down from short range.

After being rested against Canada four days earlier, Isabelle Kelly and Caitlin Moran combined for the Jillaroos’ third of the afternoon with Kelly collecting a pinpoint kick to score out wide.

The signs were starting to look ominous for the Ravens when Nakia Davis-Welsh sliced through some clumsy defence on the left edge to send Brown over in the corner, before Kelly replicated a similar movement to weave past three defenders for the Jillaroos’ fifth.

With her team on track to beat their record-breaking win on Wednesday, Talesha Quinn threw a slick cut-out pass for Brown to grab a double, and then followed it up with a strong line run of her own to grab a four-pointer.

The opening half finished the same way it started with another unfortunate bounce for Patrinos at the back allowing Brigginshaw to dart over the line for a double as the scoreline blew out to 42-0 at the break.

Canada enjoyed some much-needed possession after half-time as the Jillaroos came up with some uncharacteristic errors to allow the Ravens consecutive sets.

Ravens captain Mandy Marchak went close to scoring, before teammate Natasha Smith burrowed her way under the opposition’s legs in rugby union style to get the visitors on the board.

Multiple errors from the Jillaroos continued to frustrate Donald’s side as Meg Ward spilt a chance with the goal line in reach, before Corban McGregor and Kezie Apps coughed up the ball in good territory.

Things finally clicked again for the Jillaroos in the 57th minute when Breayley popped a short ball for Ruan Sims to crash over from short range.

With no Sam Bremner for the semi-final and in doubt for the final, Davis-Welsh again took her opportunity at the back when she sliced through to race 40 metres to the line. The crafty fullback finished with a game-high 206 metres.

A double to Hancock who barged her way over in the 68th minute finished off the win.