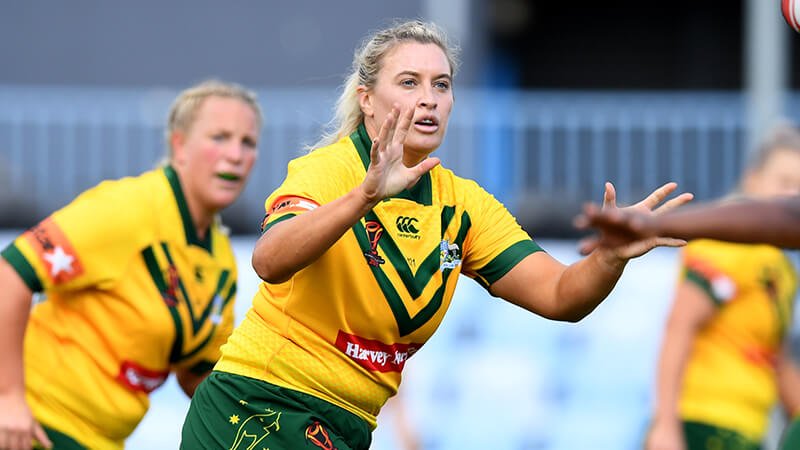 The Australian Jillaroos have cruised into the semi-finals with a 88-0 thumping of Canada to remain undefeated in the Women’s Rugby League World Cup.

Maddie Studdon was at her brilliant best, totally taking control of the match with her passing and kicking game that saw her set up five tries and score one, while her halves partner Ali Brigginshaw continued her fantastic tournament.

Four hat-tricks were scored in the match, with Vanessa Foliaki, Elianna Walton, Karina Brown and Zahara Temara enjoying high-scoring afternoon’s out, with the latter getting hers in the opening 33 minutes.

Maddie Studdon showed her pure class which opened the scoring for the Jillaroos, throwing a perfect pass to put Vanessa Foliaki on the outside of her defender and she subsequently strolled over.

In almost identical circumstances, Studdon threw the same pass in a similar position on the field just moments later as she put Zahara Temara over, before she was in the thick of the action again when she showed the ball right and turned it inside for Corban McGregor to score the Jillaroos’ third try.

Temara was the one setting up the next four-pointer from the Jillaroos when she found space on the right side once again, drew the defence and passed to an open Chelsea Baker who had nothing in front of her on the way to the try-line.

The halves linked for Australia’s fifth try of the afternoon when Ali Brigginshaw needled a neat grubber whilst on the attack, and Studdon picked it up after a deflection to score.

Studdon was causing havoc for Canada, and her passing game once again led to a try on the right side when she again put Temara outside her defender to run away and increase their lead to 28-0.

All six tries had come while on the attack for the Jillaroos thus far, but that changed when McGregor scored an impressive long-range solo effort off a 20-metre tap.

Temara secured her hat-trick down the right-edge deep into the first half, but that wouldn’t be the final scoring play before the break, as inspirational veteran Ruan Sims bulldozed her way over under the posts to increase their lead to 44-0.

Australia picked up where they left off to open the second half after earning back-to-back sets bringing up the half century when Brigginshaw offloaded to a rampaging Elianna Walton, who would not be stopped.

The next two tries was a case of class versus power, with a long ball from Brigginshaw have Foliaki her second try before Walton pinned the ears back and crashed through multiple defenders to put her name on the scoresheet for the second time too.

Foliaki secured her hat-trick just after the hour mark, before Lavina O’Mealey burst through down the left edge before passing to Karina brown who scored in the corner.

Baker got her second of the afternoon with a brilliant solo effort from inside her own half which included two sharp left-foot steps to burn the defence, before some nice work out of dummy half by Brittany Brealey created space for Brown’s second try.

Walton secured her impressive second half hat-trick when she crashed on to a Studdon short ball to move the Jillaroos passed 80, before Brown hit the accelerator off the kick-off to bag her third.