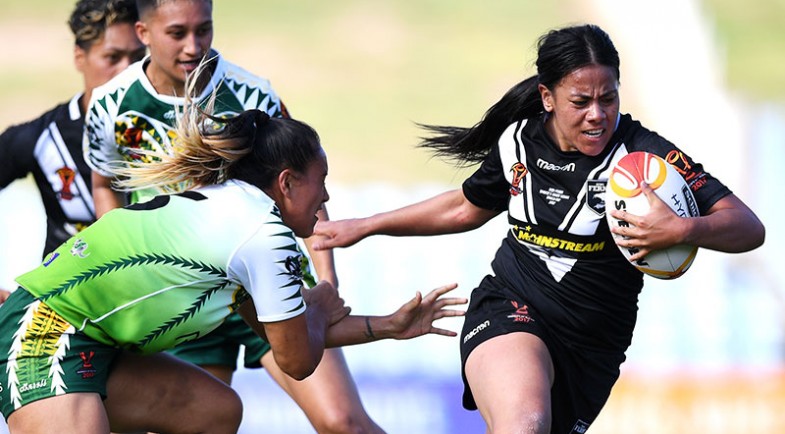 New Zealand stamped their claims as genuine title contenders after a crushing 76-0 victory over a gutsy Cook Islands outfit on Sunday afternoon.

The Ferns ran in 14 tries in a near-perfect performance with speedster Honey Hireme crossing for six tries in a clinical display of rugby league.
Halfback Kimiora Nati put in another strong showing as she led her team around with her pin-point kicking game and combined strongly with halves partner Raecene McGregor, who crossed for two tries of her own.

Cook Islands enjoyed a promising opening stanza with their threatening attacking raids causing havoc for the New Zealand defence, but it was the Ferns who broke the deadlock with a right-to-left shift at the opposing end which gave Hireme the first try of the contest.

Hireme found open space in the ensuing set with a burst down the left-hand touchline, and a second try was looming for New Zealand but winger Atawhai Tupea couldn’t maintain possession in the opposite corner.

While the Cooks Islands were desperately searching for a quick reprieve, the Ferns were brimming with confidence and rampaging front-rower Lilieta Maumau extended their lead after she brushed off a host of defenders on her way to the try-line.

Kimiora Nati converted from in-front to take a 10-0 stranglehold after 20 minutes.

New Zealand continued their dominance with their forwards laying a strong platform through the middle-third, and Shontelle Woodman took full advantage as she added her name to the scoresheet just moments later.

Nita Maynard was providing significant impact off the bench with some darting runs out of dummy-half, and a break through the middle was finished with a quick play-the-ball for fellow interchange player Krystal Murray, who crossed for their fourth try.

Hireme and Woodman were causing trouble for the Cook Islands right-edge defence as they combined for three tries within a relentless five minute period, with Hireme grabbing her hat-trick courtesy of a some brilliant inside play from Woodman.

Murray was denied a second try in the closing stages of the first-half, but it made little difference as the Ferns dominated proceedings to take a 38-0 lead at the break.

New Zealand five-eighth Raecene McGregor split the defence in the early exchanges of the second-half and was brought down just metres out from the try-line, with Hireme capitalising on the broken defence and crossing for her fourth try of the game.

Hireme eventually grabbed her fifth try after being previously denied by the video referee with Nati unable to convert as the Ferns took a 48-0 lead after 50 minutes.

Fullback Apii Nicholls-Paulau was putting in another stellar performance with some evasive runs and tireless efforts from the back, and soon turned provider fro McGregor with a brilliant offload that put the five-eighth over from close range.

McGregor raced away for her second try off the following set before Maynard snuck her way over the try-line just five minutes later.

The Cook Islands were valiant despite trailing on the scoreboard as they continued to fight hard for valuable field position and were frantically scrambling in defence, but the left-side attack of the Ferns couldn’t be stopped as Hireme sprinted away for her eighth try of the tournament.

Murray scored her second try with a bulldozing run from 30 metres in the closing stages out before her team backed it up with some committed goal-line defence to hold out the Cook Islands and finish with a dominant 76-0 victory.