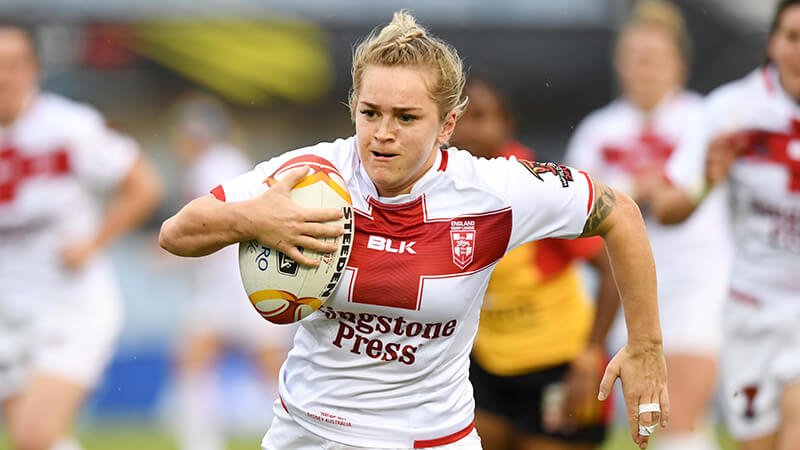 Lionesses run out victorious against Orchids

Despite PNG scoring first as centre Naomi Kaupau collected Amelia Kuk’s kick from centre field to touch down in the right-hand corner, England were able to put in a dominant display to secure a win in their opening match of the group stages.

England immediately responded with a short kick-off from the restart to give themselves possession in field position and came close twice as half-back Kirsty Moroney was denied a try by the video referee and centre Amy Hardcastle was held short of the line.

On her World Cup debut, Shona Hoyle found a gap in the Orchids defence to score and Tara-Jane Stanley converted to put England ahead for the first time in the game.

The Orchids continued to put pressure on the England side and their efforts paid off as they went in front once again with a try from centre Anne Oiufa.

A high-tackle by Captain Andrea Dobson gave PNG field position and the opposition almost added a third try through full-back Amelia Kuk who knocked on in the tackle just metres short of the line.

From the scrum, Amy Hardcastle ran the full length of the field to score a sensational try to put England ahead.

England continued to push for another try and Emily Rudge found Tara-Jane Stanley unopposed on the right wing to further the lead.

Just before half-time, Emma Slowe scooped up a loose Orchids ball on their 30m line before a pass out wide by Dobson put Charlotte Booth through on the left wing and bring the half-time score to 18-8.

England came close to scoring in the opening ten minutes of the second half as Kirsty Moroney’s pass out wide to Tara-Jane Stanley allowed her to race through the Orchids defence before being caught a few metres out from the try line.

An error by PNG’s Martha Karl, who slipped in to touch collecting an England kick, gifted the home side possession 20 metres out from the try line but they were once again unable to capitalise on their position.

Following a scoreless first 20 minutes of the second half, Danielle Bound forced herself over the line and Stanley was able to convert from in front of the posts.

PNG’s full-back Kuk kicked a loose ball down field for centre Joan Kuman to score but the try was disallowed.

A kick by scrum-half Shirley Joe once again gave the Orchids field position but Stanley was able to collect the ball and prevent them from scoring.

Charlotte Booth crossed for her second try of the game with seven minutes remaining to extend the lead.

With two minutes remaining of the game, Emma Slowe had the ball stripped over the line and England were awarded a penalty. Beth Sutcliffe was able to capitalise on the field position and touched down left of the sticks.

Stanley converted to close the game at 36-8.