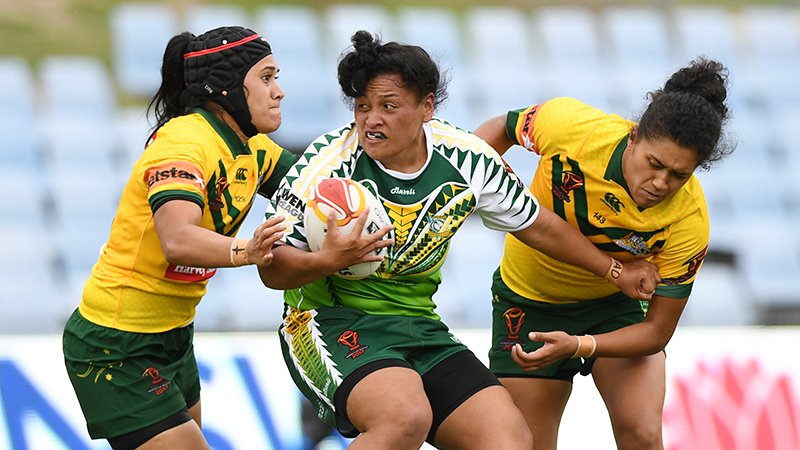 Jillaroos too strong for Cook Islands

The Australian Jillaroos have opened their Women’s World Cup title defence in style with a crushing 58-4 victory over the Cook Islands in Cronulla on Thursday.

The Jillaroos capitalised on 10 line breaks in the first half to pile on seven tries for a 36-0 advantage at the break, but lost their way in the final 20 minutes of the contest in the only concern for coach Brad Donald heading into their second-round fixture with England on Sunday.

An error from Cook Islands hooker Inangaro Maraeara allowed for the Jillaroos to strike early with halfback Caitlin Moran forcing her way over the line in the seventh minute.

A four-pointer to hooker Brittany Breayley extended the lead further for the host nation, before five-eighth Ali Brigginshaw sliced through the Cook Islands defence to race 45 metres and score.

Brigginshaw was in on the action once more following the restart with a pin-point cut-out pass for winger Karina Brown to go over in the corner, followed by a short ball to send back-rower Vanessa Foliaki over untouched.

The onslaught continued seven minutes later when centre Isabelle Kelly popped a late offload that resulted in debutant Talesha Quinn outpacing four chasers to the try line, before Kelly dived over herself after another pass from Brigginshaw.

A strong charge from prop Toka Natua offered the Cook Islands a brief reprieve and a rare chance to attack inside the Jillaroos’ 20-metre zone before the half-time siren sounded to halt the momentum.

Natua was among the Cook Islands’ best in a beaten outfit with 100 metres in a 54-minute effort.

Australia showed no signs of slowing down in the second half to reach the half-century mark with 23 minutes remaining with debutantes Nakia Davis-Welsh, Meg Ward and Lavina O’Mealey going over for four-pointers.

With the side missing regular custodian Sam Bremner for the clash, the agility of Davis-Welsh was on show with a weaving effort to brush off five defenders on her run to the line.

Indigenous All Stars teammate O’Mealey then sent Northern Territory product Meg Ward over with a late offload, before throwing a dummy the following set to charge over the line from close range.

The Cook Islands were rewarded for a brief period of possession to receive the loudest reception of the afternoon with centre Chantelle Inangaro Schofield going down a short side to plant the ball down late in the game.

Australia responded with two minutes left with Moran stepping inside Cook Islands fullback Kiana Takairangi for a double to ice the win.