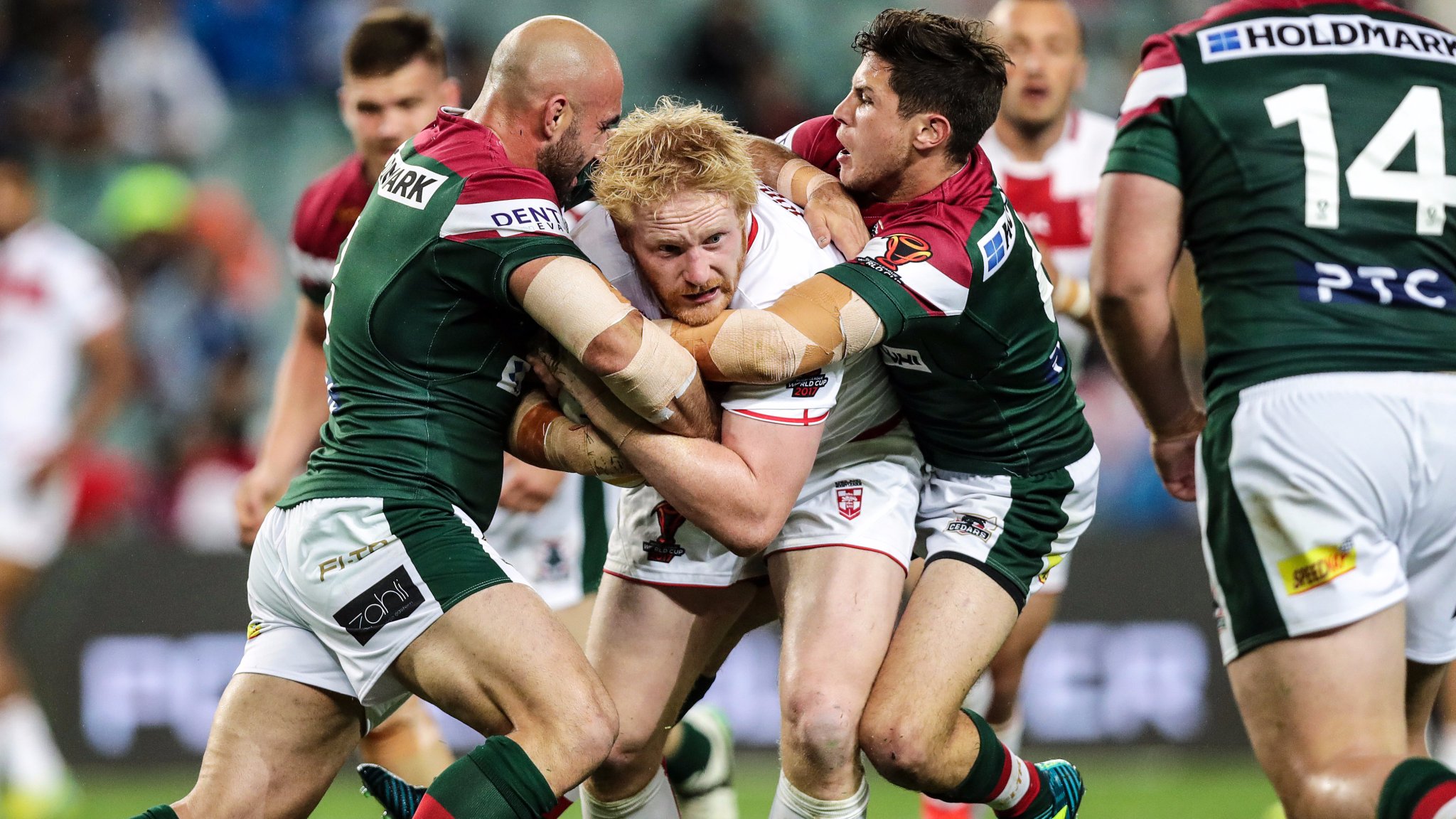 England have overcome a fiery encounter to beat Lebanon 29-10 in their second Rugby League World Cup Pool A clash at the Sydney Football Stadium.

The match was not without its controversy in front of a pro-Lebanon crowd with England winger Jermaine McGillvary placed on report in the second half for allegedly biting Lebanon skipper Robbie Farah – the pair engaged in a running battle for the remainder of the contest.

Replays showed McGillvary could have a case to answer with Farah making an official complaint on-field with a Rugby League World Cup official.

Gareth Widdop corrected an earlier chance to link with late inclusion Stefan Ratchford who sent Watkins over in the corner.

The English continued to pepper the right side of Lebanon’s defence and were creating overlaps at will, but Widdop again came up short with a forward pass that would have otherwise led to his side’s second try of the night.

Further ill-discipline from Wayne Bennett’s men allowed for Lebanon to hit back with a Farah grubber kick close to the line coughed up by Widdop in slippery conditions, allowing for lock-forward Nick Kassis to pounce in the 18th minute and level the scores at 6-6.

England survived another scare two minutes later when Farah earned a repeat set and almost sent Adam Doueihi over with a cross-field kick.

The excitement of a possible boilover was soon over however, with three tries in eight minutes setting up England’s 16-point advantage going into the break.

Another backline movement on the right edge resulted in Watkins setting up wing partner McGillvary, before teammate Ryan Hall crossed in the opposite corner in controversial circumstances three minutes later.

Hall looked to have lost the ball in a contest with Lebanon winger Travis Robinson, but the video referee ruled otherwise.

Lebanon’s impressive start began to unravel as the class of England went to another level with Canberra Raiders hooker Josh Hodgson sending back-rower Ben Currie over on the left edge before the break.

Currie was among England’s best with 140 metres in the 80-minute performance after being promoted by Bennett to the starting line-up following Sam Burgess’s absence.

A spectator for the tournament, George Burgess waved an English flag in the crowd as brother Tom sliced his way through and steamrolled his way over the line for England’s fifth try, with a side-step burning Lebanon fullback Daniel Abou-Sleiman in the 56th minute.

The game fell away from its early high standard, with errors creeping in from both sides to round out the clash, with Widdop guilty of two more forward passes in a mixed evening.

Bennett used George Williams in the halves towards the backend of the contest with Widdop shifting to fullback, slotting a field goal from in front on the fulltime siren.

The result was inevitable but Lebanon fans were on their feet late in the game with Jason Wehbe sliding over the line for their second try of the match.

England now travel to Perth to face France next weekend, while Lebanon remain in Sydney where they will face Australia in the final round of pool matches.