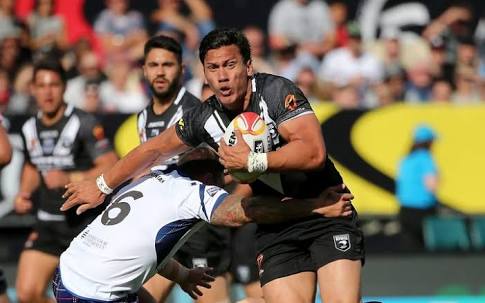 A razzle-dazzle attacking display from New Zealand has seen the Kiwis comprehensively beat the Scotland Bravehearts 74-6 in their World Cup Pool B clash at Christchurch Stadium.

The Kiwis erased any memories of the 18-all draw they suffered to Scotland in last year’s Four Nations, putting the Bravehearts to the sword in front of 12,130 home fans.

New Zealand were simply too good, making 18 line breaks and offloading 31 times to run through a rebuilding Scottish team.

It was a special day for Kiwis halfback Shaun Johnson who overtook Matthew Ridge as New Zealand’s all-time leading point scorer, recording a personal tally of 22 points on his way to the record.

The onslaught started early, with the Kiwis opening the scoring in the 9th minute through Kenny Bromwich – his first four-pointer for his country.

Just minutes later, New Zealand used this momentum to give winger Jason Nightingale his first try of the tournament and a commanding 10-point lead.

The Kiwis did not stop there, with second-row forward Joseph Tapine scoring a soft try in the 15th minute. Johnson missed his second conversion of the match to leave the score-line at 14-0.

When Scottish five-eighth Danny Brough kicked out on the full in the 21st minute, the Bravehearts’ heads collectively dropped and New Zealand fullback Roger Tuivasa-Sheck took advantage, setting up Nightingale for his second.

Nelson Asofa-Solomona then showed his class, capping off a barnstorming run with a no-look flick pass that put five-eighth Te Maire Martin in under the posts and extended New Zealand’s lead to 24.

The Kiwis continued to pile on the points, with Peta Hiku crossing on the stroke of half-time to give his side a 28-point lead at the break.

There would be no second-half comeback for Scotland, with Kiwi prop Russell Packer making the score 34-0 in the 43rd minute.

The scoreboard hit 40 when Martin crossed for his second in the 52nd minute, before Dean Whare scored in the corner two minutes later to make it 46-0.

Hiku brought up the half century for New Zealand in the 58th minute and Johnson kicked truly to leave Scotland reeling at 52-0 down.

Johnson then proved he could do it all, scoring a try of his own in the 61st minute before setting up Hiku for his third.

But Scotland never stopped trying and they were rewarded for their efforts in the 71st minute, breaking their goose egg courtesy of a try to halfback Oscar Thomas.

The Kiwis crossed twice more before the full-time siren sounded, with David Kidwell’s men sending a message to the rest of the tournament that they are the real deal.