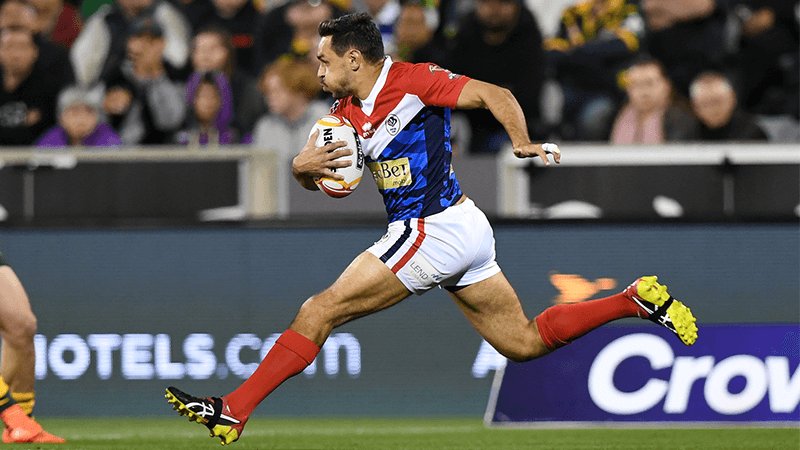 Kangaroos book spot in Quarter Finals after win over France

The Kangaroos have booked a spot in the World Cup quarter-finals following a Wade Graham-inspired 52-6 win over France at Canberra Stadium.

In his just his second Test in the green and gold jersey, the Sharks back-rower ran amok with four tries to make it two wins from as many matches for Australia who secured their spot on top of Pool A with one game remaining.

The Kangaroos looked to have taken the lead in the sixth minute when debutant Tom Trbojevic expertly collected a well-weighted kick from Michael Morgan, but the winger’s four-pointer was disallowed due to an obstruction in the lead up.

It would prove to be a minor reprieve for the underdogs as Graham forced his way through the defensive line to make it 4-0 after 12 minutes.

The scoreboard attendant had barely sat down when Graham – who scored a hat-trick against the Raiders in Canberra earlier in the year – finished off a slick ruck move from the next set to push Australia further in front.

Things looked ominous when Cameron Smith picked the ball up from 20 metres out and grubbered through for Storm teammate Billy Slater – a play that has led to countless tries – but France fullback Mark Kheirallah had other ideas as he collected the loose ball, stepped past the chasers and sprinted 95 metres to score one of the tries of the World Cup.

Whispers of a monumental upset lasted all of 60 seconds as the Kangaroos hit back from their next opportunity as Graham capped off a dream 30-minute stint with his third try of the half to steady the ship.

With Graham off for a well-deserved breather, Tyson Frizell switched to the left edge and made an immediate impact as he linked up with Josh Dugan who mesmerised the defence with his footwork before he somehow planted the ball to make it 20-6.

The change of ends did little to halt Australia’s momentum as rookie halfback Cameron Munster strolled through some paper-thin defence to score a try on debut before he turned provider for Frizell to bully his way over.

Australia’s right edge had spent the first 50 minutes discussing Melbourne Cup tips as they watched their left-side comrades have all the fun, but they eventually clicked into gear as Michael Morgan sliced through and then found Billy Slater back on the inside to score his record-equalling 13th World Cup try.

Slater might have blown a golden opportunity to score his second of the evening but he made amends with a stunning 40/20 before Graham came back to haunt the French with his fourth try.

Mal Meninga made the call to take Smith and Slater off for the final 10 minutes of the match but it mattered little as Munster and Valentine Holmes crossed late to seal the emphatic win.