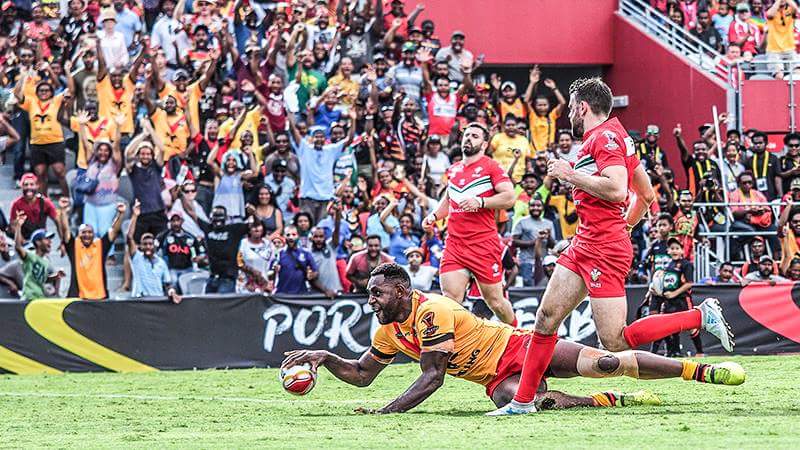 Papua New Guinea have opened their 2017 Rugby League World Cup campaign in style with a crushing 50-6 victory over Wales in Port Moresby on Saturday.

It was a dominant performance from the Kumuls who took advantage of humid conditions on home turf to pile on 10 tries in front of a sell-out crowd.

Despite a high completion rate for the contest, Wales were drained in the mid 30-degree conditions and struggled with field position as the Kumuls enjoyed a 62 per cent possession rate.

The impact of NRL experience was on show early for the Kumuls with skipper David Mead going over for an early double, before St George Illawarra Dragons winger Nene MacDonald wriggled his way over the line for a 14-point advantage.

Bullocking runs from wingers Justin Olam (105 metres) and Garry Lo (190 metres) enabled PNG to consistently get their sets on the front foot and Mead’s opening four-pointer set the tone for the afternoon with the flyer fending off Welsh halfback Matt Seamark to go over in the corner.

Mead was in for a second try four minutes later when he split through the middle following a late pass from five-eighth Thomas Boas, while MacDonald proved no match for opposite centre Andrew Gay close to the line.

Play was stopped momentarily in the 26th minute with Wales interchange forward Ben Evans making an official complaint that he was bitten by Kumuls player Wellington Albert in a tackle.

Despite footage suggesting Albert could have a case to answer, the Wales outfit had no answers for PNG as Michael Marum’s side continued to up the ante.

A loose pass from James Segeyaro turned into gold for the Kumuls with Mead latching onto the bouncing ball to split through the Welsh defence – his fourth line-break of the half – before halfback Watson Boas provided the pin-point kick for Kato Ottio to plant the ball down out wide.

Wales back-rower Chester Butler came off second best in a charging run from the restart and was taken from the field for a head injury assessment as tensions began to flare with his teammate and replacement Rhodri Lloyd penalised for a late tackle on Boas soon after.

Another strong charge from Lo on the edge set up PNG’s fifth try of the afternoon with the flyer sending Albert into a yawning gap to cross next to the posts for a 26-0 half-time lead.

Things got worse for the Welsh immediately after the break with Sam Hopkins leaving the field following a nasty head knock, while Courtney Davies struggled with a wrist injury in the brutal encounter.

The Kumuls showed no signs of slowing down as the match went on with Boas sending Canterbury back-rower Rhyse Martin over the line to extend the lead in the 43rd minute.

Boas and Martin linked up again 10 minutes later to stretch the margin out to 36 points, before Martin turned provider for Olam to pounce on a grubber kick for the Kumuls’ eighth try of the day.

Despite the result being wrapped up with a quarter of the game remaining, the Kumuls continued to torment with Segeyaro finding Mead with a short kick for his third try.

Mead’s hat-trick was the first in World Cup history for the Kumuls and the 44-0 scoreline immediately doubled that of the total points the nation managed in the entire 2013 tournament.

The points continued in the 70th minute with Canberra Raiders hooker Kurt Baptiste sending veteran Paul Aiton over the line to complete the half century margin.

Wales finally got on the board as the full-time siren sounded with Seamark providing a kick out wide for Regan Grace to pick up the loose ball and score. 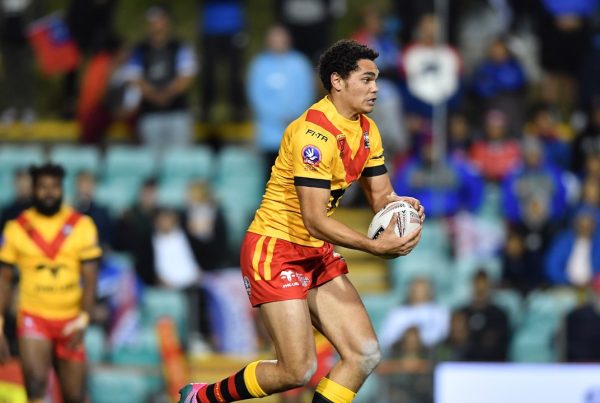