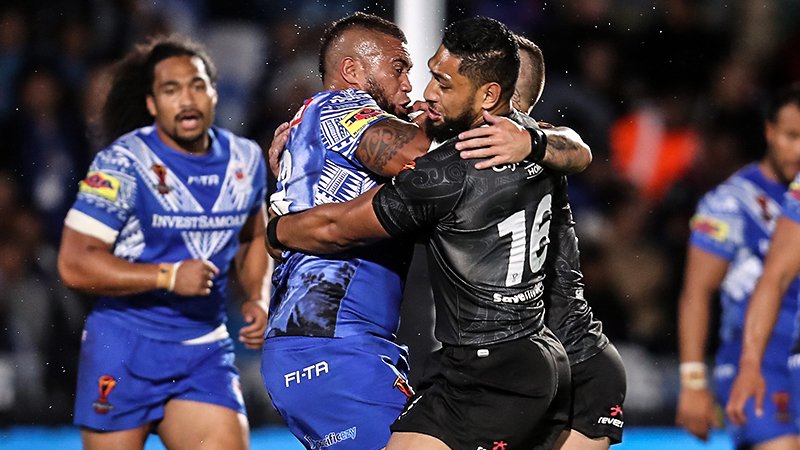 New Zealand run riot in second half against Samoa

New Zealand scorched Samoa in the second half to run out 38-8 winners in their opening Rugby League World Cup match in Auckland on Saturday night.

After holding a narrow 10-4 advantage at the end of a first half where they completed just half of their sets, the Kiwis scored five tries in the second period to clock a convincing result in the first game of Pool B.

While the final scoreline was flattering for coach David Kidwell’s side, the journey to it was at times anything but, as they coughed 17 errors and struggled to execute their offload-heavy plan.

Samoa will lament a second half where they repeatedly shot themselves in the foot with errors coming out of yardage, while they appeared to struggle with the pace of the game when the Kiwis found second gear after the break.

The start couldn’t have gone any better for New Zealand, who were over via Jordan Rapana after just four minutes, before a clever interchange of passing between Simon Mannering and Thomas Leuluai saw Shaun Johnson score and convert for a 10-0 lead.

Samoa were creating turnovers off their swarming defence and had a couple of chances to register first-half points before Ken Maumalo went over with four minutes left, reducing the deficit to six.

Both Brad Takairangi and Isaac Liu grabbed tries on Test debut early in the second half, along with Kodi Nikorima’s screaming run onto a Johnson grubber, to give the local side a 16-point advantage.

A long stoppage in play to take Gerard Beale from the field, after he collapsed away from contact with a suspected broken leg, did nothing to halt New Zealand’s momentum, and a short time later Nikorima turned provider to send Roger Tuivasa-Sheck through for a clean run to the line.

A spectacular effort from Nelson Asofa-Solomona saw him stretch out and become the third Kiwi to score on Test debut with nine minutes to go, before Samoa five-eighth Joseph Paulo dotted down after the siren to offer a slight positive for his side and finish the scoring at 38-8.