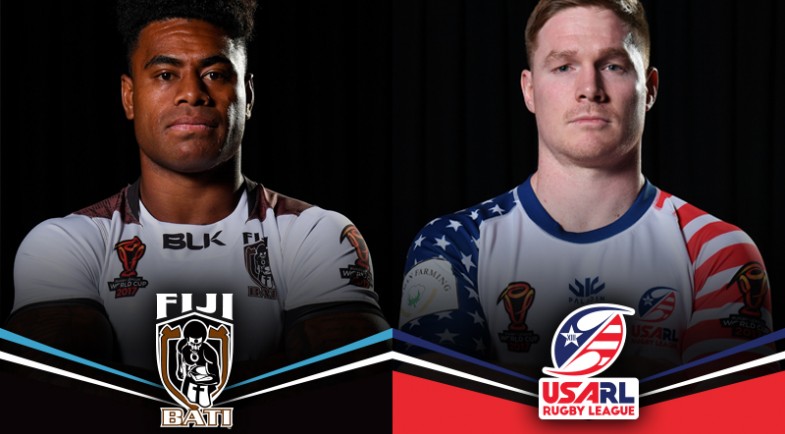 A renewed USA team beaming with home-grown players will take on a battle-ready Fiji in Townsville on Saturday night and the directions of both sides heading into RLWC2017 couldn’t be further apart.

Boosted by the return of Jarryd Hayne to their side nine years after he enjoyed a break-out tournament at the 2008 World Cup, Fiji have also been blessed to see the emergence and development of a number of players in the NRL competition in recent years.
Melbourne Storm winger Suliasi Vunivalu, Manly Warringah Sea Eagles hooker Apisai Koroisau and Newcastle Knights prop Jacob Saifiti all headline Fiji’s crop of evolving talent.

Coach Mick Potter has wasted no time handing Hayne the reigns to the team, naming him at five-eighth – a position he hasn’t dabbled with since his early years at the Parramatta Eels in the late 2000s.

Potter is driving high expectations amongst his squad and led with an up-front declaration of the side’s goals for the next five weeks.

“We’re here to win it” Potter told NRL.com. “We haven’t come here to make up the numbers. We’ve come here believing that we can do the job.”

With the Sims brother’s holding court in the middle of the field along with Kane Evans and Vilame Kikau, Fiji should be able to gain the ascendancy moving forward and will likely be awarded with multiple attacking opportunities close to the USA line.

The Hawks have elected to the look to the future and in an effort to grow the sport in their homeland, they’ve selected a host of players from the USARL competition.

They’ll be giving away close to 1000 games of first-grade experience to Fiji and only Eddy Pettybourne, Junior Vaivai, and Bureta Faraimo have played professionally in Australia.

That inexperience at the elite heights of the sport could see the Hawks struggle in defence, but they’ve given themselves the best opportunity possible by basing their preparations in Townsville.

Despite being the surprise-packets of the 2013 World Cup, Team USA are realistic about their expectations this time round – even if they are led by four-time Super League premiership-winning coach Brian McDermott.

“This World Cup once again puts the USA Rugby League on the global stage but this time to showcase up-and-coming USA talent,” captain Mark Offerdahl said at the time of selection.

“Whatever the results, I’m proud to wear the Red, White and Blue.”

While they’ll be wearing those famous red, white and blue colours of the United States flag, this green group of domestic-based players will be up for a tough assignment against a Fiji side looking to go one better than their semi-final finish at the 2013 World Cup.