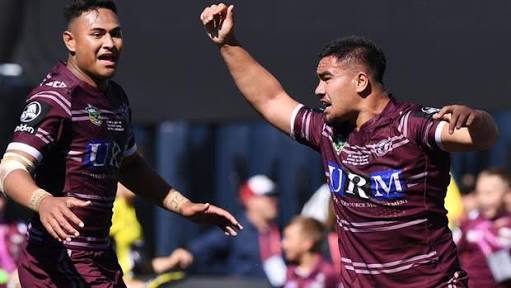 The Sea Eagles have pulled off one of the most dramatic finishes in Holden Cup history to steal a stunning 20-18 upset win over the Parramatta Eels in what was a fitting way to farewell the under-20s competition.

Trailing 14-0 after 15 minutes it looked as though the fairytale run of the eighth-placed Sea Eagles was about to come to an end, but as they’ve done all post-season Manly defied the odds to steal the win with the final play of the game.

Down by four points, co-captain Manase Fainu drifted across field and played short to late-inclusion Keith Titmuss who charged into the hole and survived a big hit as he showboated to score the most important try of his career.

That left Tevita Funa with a pressure kick from next to the posts to win the game, and the big centre didn’t let his teammates down with a clutch conversion to end the game.

It was a heartbreaking way for Parramatta to lose after they looked in total control for the first quarter of the contest before errors let them down for the remaining hour.

The pre-game favourites couldn’t have asked for a better start with rookie halfback Dylan Brown slicing straight through inside the opening three minutes to give Parramatta the early lead.

Manly looked to have worked their way back into the grind courtesy of a couple of penalties, but an error followed by a huge break by hulking winger Greg Leleisiuao ended with Brown knocking over another two points from next to the posts.

Smelling blood in the water, the Eels extended their lead from the next set when Reed Mahoney – who started the match despite being named on the bench – turned co-captain Denzal Tonise on the inside to make it 14-0 after 18 minutes.

The Sea Eagles had to be the next team to score and they thought they’d done just that when Semisi Kioa wrestled his way over the line, only for the his opposite number Noel Aukafolau to somehow hold him up in one of the tackles of the year.

It could have been the nail in the coffin for Wayne Lambkin’s men but they didn’t dwell on the missed opportunity with Tevita Funa going over untouched from the very next play courtesy of a slick cut-out pass from Cade Cust to give his side a much-needed lift 10 minutes out from the break.

Grand finals are won on skills and hard work, but the Sea Eagles found out that luck can be just as valuable as the Eels butchered a golden opportunity to push further in front when the boot of Manase Fainu denied Oregon Kaufusi what would have been a certain four-pointer.

Having looked out of the contest after 20 minutes, Manly took all the momentum going into the break when Bilal Maarbani latched onto a Cust grubber to cut the gap to four points with the final play of the first half.

The 10-minute interval failed to halt Manly’s momentum and the men in maroon and white were suddenly level when back-rower Blake Andrews beat a flimsy would-be tackle and sprinted away to make it 14-all early in the second stanza.

Nothing was going Parramatta’s way in the second half as Luke Burt’s men were forced to defend virtually five sets in a row on their own line due to a spate of sloppy unforced errors.

Manly had enough chances to take the lead, but after a glut of possession were eventually turned away by the Eels who marched downfield and landed a telling blow when Leleisiuao raced in without a hand laid on him to end Parramatta’s hour-long scoring drought to make it 18-14.

Just when you thought it was all over, Maarbani burst into the clear down the left edge and tried to chip over Anthony Layoun, only for the Eels fullback to save the day with a crucial charge down that dribbled into touch to give Manly one final chance to steal the win.

Five-eighth Tom Wright blew a golden opportunity to score when he had a couple of teammates unmarked out wide, but it mattered little as Manase Fainu played short to a rampaging Keith Titmuss who barged over before Funa converted to cap a remarkable turnaround for Manly who claimed the wooden spoon in 2016.