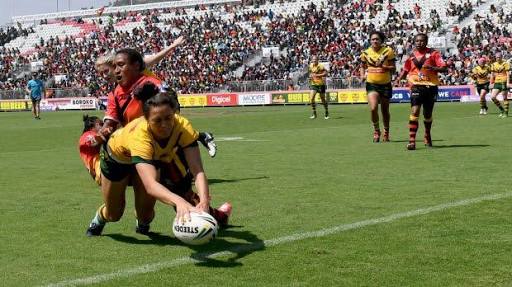 The match was the first Test between the two nations, with the PNG Orchids forming for this year’s World Cup.

Split into four quarters because of the oppressive heat and humidity, the match was dominated by the Jillaroos, who proved far too professional for the gutsy Orchids in what was also the first women’s Test match in the country.

Co-captains Renae Kunst and Steph Hancock led from the front for Australia with three tries between them in the first half as the visitors took a commanding 30-0 lead into the break.

After a physical start, outside back Corban McGregor opened the scoring after seven minutes with a try that Chelsea Baker failed to convert.

Kody House went over in the corner in the 33rd minute after replacing debutant winger Jessica Sergis, who had come from the field due to heat stress.

Fellow debutant Talesha Quinn scored her first try for the Jillaroos just before the half-time break.

Tries to Meg Ward and Sergis soon after the break were both converted by Baker, who finished with a haul of ten points from her five successful kicks.

The packed crowd roared when rampaging prop Maima Wei scored the first ever try for the Orchids late in the game.

Jillaroos coach Brad Donald hailed Hancock’s performance after she had been left out of the side for the Anzac Test against New Zealand in May.

“For her to come back the way that she did … I’m extremely proud of her,” he said.

Donald praised the Orchids for their relentless defence.

“I think Dennis (Miall, Orchids coach) and his team have got lots to look forward to with the World Cup,” Donald said.

Miall was happy his team were able to test themselves against the No. 1-ranked Jillaroos.

“We’re proud of what our girls did today,” he said.