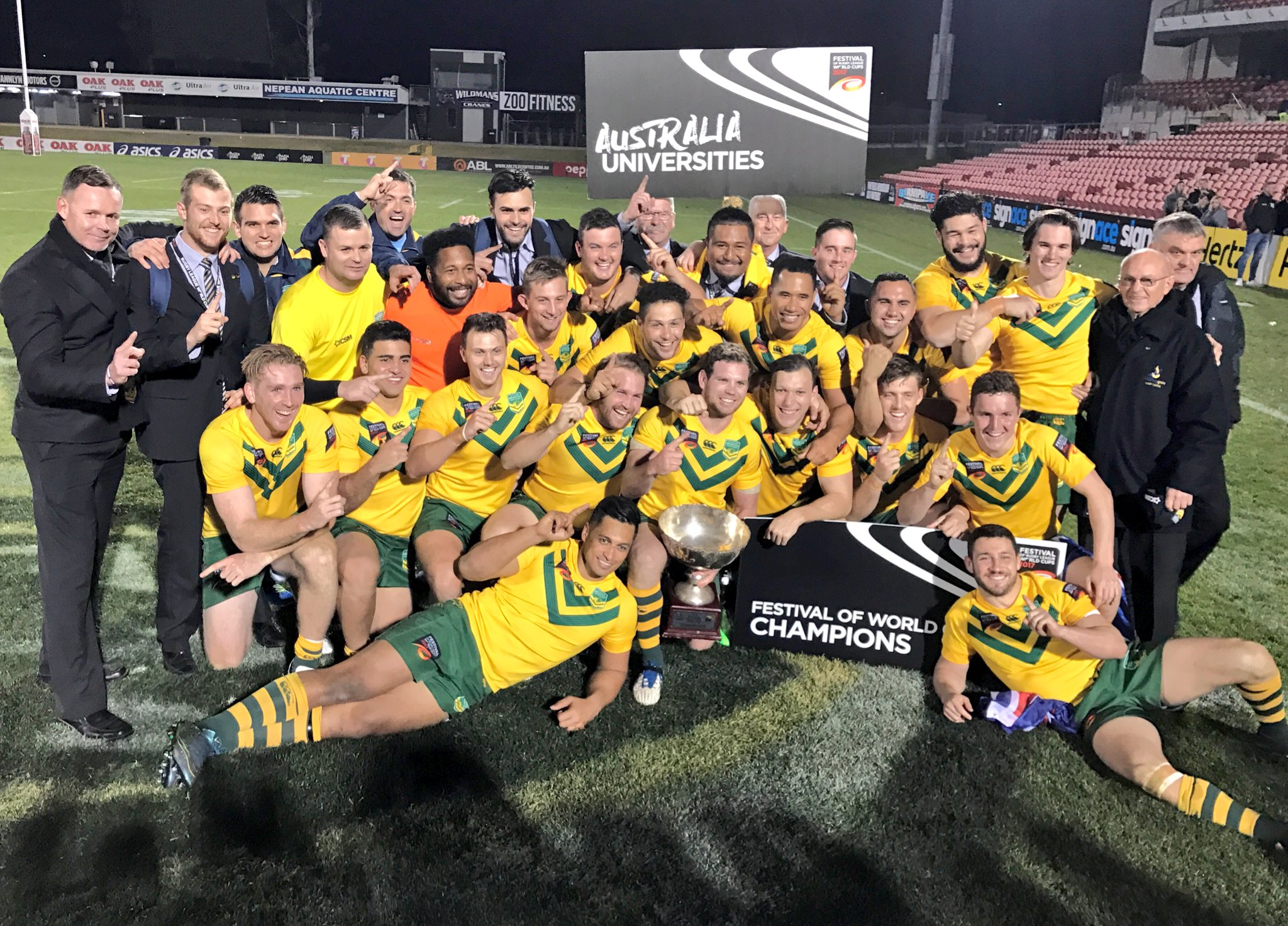 In easily their toughest match of the tournament, the Australians were pushed to the limit by a gallant Pacific Islands team in a match worthy of a Final – before finally clinching a third straight Universities World Cup in the last 20 minutes to bring the 2017 Festival of World Cups to a fitting finale.

After both sides showed nerves in the early stages, the Islanders were able to work field position in the 12th minute for giant centre John Faiumu to burst through four defenders down the right hand blind side to score the opening try. Robert Vai converted for a 6-nil Pacific Islands lead.

The Australians’ attack did not show the same sharpness than they did earlier in the for nearly the rest of the first half – as the defending champions continued to be bustled into nervous errors by the solid Pacific Islands defence.

Finally, with five minutes to play in the first half, the Australians held on to the ball for long enough to work a left side shift for fullback Jarrod Lee to score in the corner. Mick O’Keefe missed the conversion from near touch to leave the Pacific Islands with a 6-4 lead at the break.

The Pacific Islands extended their lead four minutes into the second half when an Australian cross field kick on the last tackle from inside their own half was not cleanly picked up – allowing Islanders winger Marli Sini to swoop on the loose ball, step back inside the backpedalling Australian defence and score a neat opportunist’s try.

Vai’s conversion from wide out gave the Pacific Islands a handy 12-4 lead – allowing the large amount of passionate Pacific Islanders’ supporters in the good sized crowd to dream of a World Cup win against the odds.

After the Australians were able to work field position in the back of Pacific Islands turnovers and a run of penalties from referee Darian Furner, star centre Jamie Anderson got on the outside of his man down the right eight minutes into the second half – before bursting through three defenders to score a determined solo try to get the defending champions back into game.

O’Keefe landed the conversion from wide out to narrow the Pacific Islands lead to 12-10.

As the Islanders’ continued to be starved of possession through the middle of the second half, the Australians slowly ground their way on top.

From a repeat set after forcing a goal line drop out in the 54th minute, a grubber kick on the last tackle by Australian five-eighth Mackenzie Reid bounced off the upright into the hands of half back Ryan Cameron who scored next to the posts to give the host nation the lead for the first time at 16-12 after O’Keefe added the extras.

After the Pacific Islands put the restart kickoff out on the full, the Australians then upped the ante against the Islanders’ defence – putting on a shift through the hands down the left for centre Mick Pearsall to score his first try near the corner. O’Keefe nailed the conversion from near touch to give the Australians a 22-12 lead.

The Islanders’ frustrations of being starved of possession in the second half from turnovers and penalties took its toll with 12 minutes left when half back Jesse Domic was sin binned for 10 minutes by referee Furner for dissent.

Against a tiring 12 man Islanders’ defence, the Australians then went in for the kill. From the ensuing penalty, a sweeping backline movement left found speedster David Sheridan who dived over in the corner to wrap up the Aussies’ sixth World Cup title at 26-12 inside the last 10 minutes.

After both sides had chances in the closing stages, Pearsall put the icing on the cake with his second try in the final minute to close out the 30-12 Australian triumph.