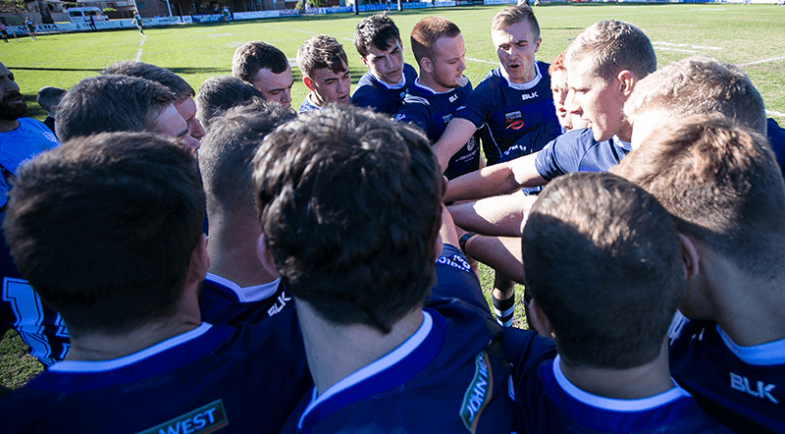 Scotland have cemented their position on top of Pool B ladder despite going down to England 30-20 in a hard-fought game at New Era Stadium on Wednesday afternoon.

England held a comfortable 18-6 lead at the break with two tries to Jason Bass in the final 10 minutes, but Scotland put in a valiant performance in the second half with five-eighth Matt Hogg leading the way with a perfect kicking record and a try of his own.

The early exchanges were brutally fought with both teams looking to dominate the opposition defensive line, but it was Scotland who got off to the perfect start with Jack Plumridge burrowing his way over from dummy-half for their maiden try of the afternoon.

Matt Hogg converted from right in front to make it 6-0 after 10 minutes.  Despite a shaky start, England hit back with a try of their own after a quick raid down the left-hand touchline saw Elliot Mall cross in the left-hand corner, with Ben Stead nailing the sideline conversion to draw the game level at the quarter-hour mark.

“We came here expecting to get into the semi-final but looking at the group we though we would finish second but as now that performance has made us top of the group so we’re really happy.”

Hogg was involving himself nicely with some classy touches and a perfectly placed grubber forcing a line drop-out, but it was his brilliant 40/20 kick that gave his side a wave of momentum.

With Scotland threatening with an attacking raid, winger Damien Gennochio thought he gave his team the lead as he pounced on a cross-field kick – only for the referee to declare he knocked it on in the process.

Scotland seemed to have the upper hand as they dominated field position, but a classy backline movement off a scrum in the ensuing set saw England speedster Jason Bass burst throw a gaping hold to cross for their second try of the game.

Stead converted to take a 12-6 lead with just 10 minutes remaining in the first half.

Back-to-back penalties to England saw an array of pressure mounting on Scotland with their gusty defence eventually breaking as Jason Bass crossed for his second try.

Bass’ vital try came at a handy time with England holding onto a 12 point advantage at the break. Hogg was proving to be the most influential figure in Scotland’s performance thus far, with the dynamic five-eighth darting through some charging defence before throwing a long-ball to his winger who was eventually brought down five metres out from the line.

Just moments later, England sent a lofty kick down-field into open space with a lucky bounce eventually finding Elliot Mall, with the winger crossing under the posts for his second try of the afternoon.

Brimming with confidence, Mall thought he had his third try just two minutes later only for the referee to rule the final past forward.

Although behind on the scoreboard with 20 minutes remaining in the contest, Scotland looked to spark a potential comeback with Liam Faughlin chasing down a crafty chip kick from Hogg to score their second try of the game.

With the game in the balance and holding just a lead of two converted tries, England were quick to reply with a match-sealing try.

Stead continued his perfect kicking record with the scoring racing out to 30-12 with just 15 minutes left in the game.

Scotland were trying desperately to salvage some pride as they put together some threatening attacking raids, but opted to take the two points to reduce the lead to 16.

Faughlin showed some brilliant speed to dart through the England defence straight off the kick-off, and they took full advantage of the momentum swing with Hogg capping off a starring performance with a four-pointer just a few tackles later.

Both teams tried to their best to finish the game strongly, but their efforts were to no avail as England eventually ran away with a 30-20 victory.