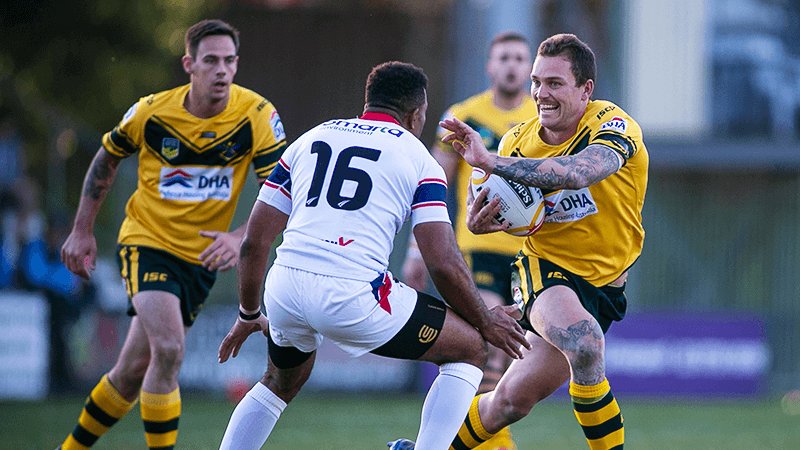 ADF too strong for Great Britain

The Australian Defence Force Rugby League Team have virtually a major step towards qualifying for next Sunday’s World Cup final with a tough 38-12 win over the Great Britain Defence Forces outfit.

In a match that had more than its’ fair share of fire between the traditional arch rivals, the Australians took their chances in the second half to complete a scoreline that did not indicate the closeness of the contest.
With plenty of feeling in the tackles for most of the contest, Great Britain started the stronger of the two sides and were rewarded for their early endeavour when a Ryan Matthews cross kick in the 10th minute was superbly fielded by winger Simon Wray for the opening try wide out. Matthews duly converted for a 6-nil lead.

After working their way forward on the back of successive penalties, the Australians replied five minutes later when hooker Jack Blaine got out of dummy half for a pass to lock Luke Chant to score his first try under the posts. Barry Ruttley converted to level scores at 6-all.

After Australian second rower Dan Halliday was penalised by referee Ethan Mitcham for a high tackle on British winger Luke Cooper in the 21st minute, the British worked their way downfield from the penalty to execute a sweeping backline movement for Lee Queeley to finish off in the corner for the try and a 10-6 British lead.

Another couple of penalties four minutes later saw Australia work into position for second rower Rob Worsley to burst away down the left hand blind to score. Ruttley’s conversion regained the lead for Australia at 12-10.

The feeling in the tackles then came to the surface – giving referee Mitcham a handful for the rest of the first half.

First, in the 28th minute, British lock George Clarke was sin binned by Mitcham for a scuffle at a ruck with Australian interchange forward Will Solway to reduce Great Britain to 12 men.

Then – after Cooper, British backrower Ben Taylor and British centre James Hutchinson pulled off a superb cover defensive tackle on Ruttley to save a certain Australian try – a blatant late hit on British half Adam Funtham as he got his clearing kick away saw Australian centre Jay Brookfield join Clarke in the sin bin.

British fullback Ben Rowan slotted the penalty goal from the late hit to leave the match locked up at 12-all at half time.

After a tight start to the second half, Chant burst clear again down the left hand blind to score his second try five minutes into the second stanza. Ruttley converted for Australia to lead 18-12.

Five minutes later on the back of another penalty, Australian half back Mitch Knowles stepped through the static British goal line defence from close range to extend the lead to 24-12 when Ruttley again added the extras.

After Taylor was penalised for a flop tackle on Worsley in the 60th minute, the Australians then took full advantage of their opportunity from the penalty set when interchange hooker Dylan McGregor burrowed over from dummy half to score his first try for a 28-12 lead.

McGregor then sealed Australia’s victory with 14 minutes left when he scooped up a loose pass from Wray as the British winger was being bundled into touch to score his second try. Ruttley made nok mistake from touch to put Australia out of sight at 34-12.

Ruttley put an exclamation mark on the win when he finished off a right side move down the blind in the final two minutes to close out the 38-12 result.