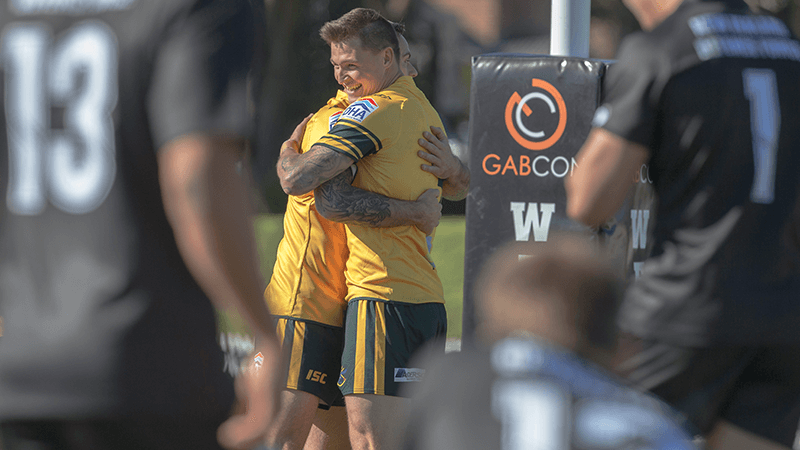 The Australian Defence Force Rugby League Team have opened their World Cup campaign with an easy 64-8 win over trans-Tasman rivals New Zealand in the opening match of the tournament at Ringrose Park.

With half Mitch Knowles scoring a hat trick of tries and fullback Barry Ruttley amassing a personal tally of 24 points with a try and 10 goals from 11 attempts, the Australians were in control from the time Ruttley scooped up a midfield bomb that was dropped by opposing Kiwi fullback Logan Afoa and dashed away to score the opening try after just 43 seconds of play.
Knowles then scored his first try when he dummied through two defenders from close range to score in the ninth minute, before the Kiwis fought back seven minutes later when Cole Waaka strode through a gap in the Australian defence down the left to score and get the Kiwis on the board at 12-4 down.

The Australians then extended their lead when centre Blake Hill took a long cut out pass from five eighth Andrew Martin to score in the 22nd minute.

On the stroke of half time, a double one on one strip saw Knowles race 50 metres to score his second try and give Australia a 24-4 half time lead after Ruttley added the extras.

Knowles completed his hat trick in the Australian’s first attack of the second half when he was on the spot to pick up a dropped bomb by Kiwi winger Hayden Gouman to score for a 30-4 lead.

The hosts then clicked up a gear to send a warning to the rest of the competition whilst putting the Kiwis to the sword.

Chris O’Shannessy, Will Solway and Jack Watson all scored tries, while interchange Aussie hooker Dylan McGregor helped himself to a double.

After Graeme Merriman got a consolation try for New Zealand from a penalty tap with five minutes to play, Jay Brookfield carried two defenders over for the last try for Australia with two minutes left.

Knowles admitted after the match to RLWC2017.com that the dream start was planned by the Aussies.

“It’s actually something we spoke about. We elected to run against the sun. and the first kick was always going to go high into the sun to test the fullback. It just so happened that the bounce of the ball came to us”, explained the Australian half.

For their part, Kiwi skipper Wade Sharland told RLWC2017.com that his charges can come back from the opening loss.

“It’s what we do with this loss. We can go back and mope or we can choose to work on things and build from here. That’s exactly what the boys are going to do. I know they feel pretty bad – but they’re pretty keen to get stuck into Fiji”, Sharland said.

Australia take on Great Britain at Cabramatta on Sunday at 4pm AEST in their next match, while New Zealand have to beat Fiji at Windsor on Sunday at 6pm AEST to keep their chances of making the Defence Force World Cup Final alive.