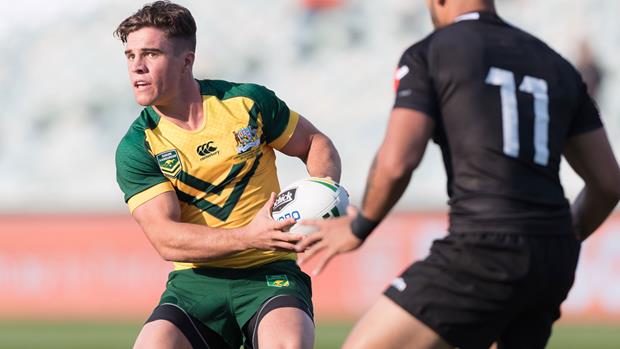 A blistering first-half performance has lifted the Junior Kangaroos to a convincing 46-22 win over the Junior Kiwis at Canberra’s GIO Stadium to make it three-straight victories in the mid-year Test.

‌The Aussies raced out to a 30-0 lead at the break and looked set to go on with the job courtesy of back-to-back tries to start the second stanza, but New Zealand showed plenty of spirit to ensure they avoided a record defeat.

Touted as the Storm’s future halfback, Brodie Croft was sensational for the Kangaroos with the 19-year-old playing a key role in four of his side’s nine tries while also gaining plenty of ground with the boot.

It didn’t take long for the Junior Kangaroos to open the scoring with Knights back-rower Sam Stone racing through to ground a Croft grubber after nine minutes.

A powerful charge by last year’s man of the match Jaydn Su’A then paved the way for Australia to extend their lead with No.9 Reece Robson taking advantage of a retreating defensive line to burrow over from close range to make it 12-0.

The Junior Kiwis looked to have worked their way back into the contest but an injury delay halted their momentum and they soon found themselves further behind when winger Tyronne Roberts-Davis finished off some quick hands down the left to cross virtually untouched in the left corner.

The Titans winger soon had a double when he was on the receiving end of a smart cut-out ball from Croft who could have passed to several teammates given the overlap Australia had created on the left edge.

A near-faultless first-half was then capped off by the play of the day when Croft took the ball to the line, dished a no-look ball back on the inside to Corey Allan who drew in the fullback before finding Robson for his second of the afternoon.

There was still time for the Aussies to add to their tally before the break and they did just that as Jai Field got on the outside of his man and then hit Victor Radley on the chest to give the green and golds a commanding 30-0 lead.

Any thoughts the Australians would take their foot off the gas in the second-half were quickly put to bed when Field put on the afterburners to score, and the procession continued from the very next set as Croft played short to put Su’A into a yawning gap to make it 40-0 after 47 minutes.

The visitors finally had a reason to celebrate when Steve Marsters touched down in the left corner and they were soon in again through Dane Aukafolau after Roberts-Davis had been sent to the sin bin for a professional foul moments earlier.

New Zealand’s second-half fightback continued when their skipper Jarome Luai powered his way over from close range to add some respectability to the scoreline.

The Aussies finally ended their drought 10 minutes from the end as Allan did what all good fullbacks do by backing up a midfield break to score under the posts before Briton Nikora pegged one back for the Kiwis with the final play of the game.