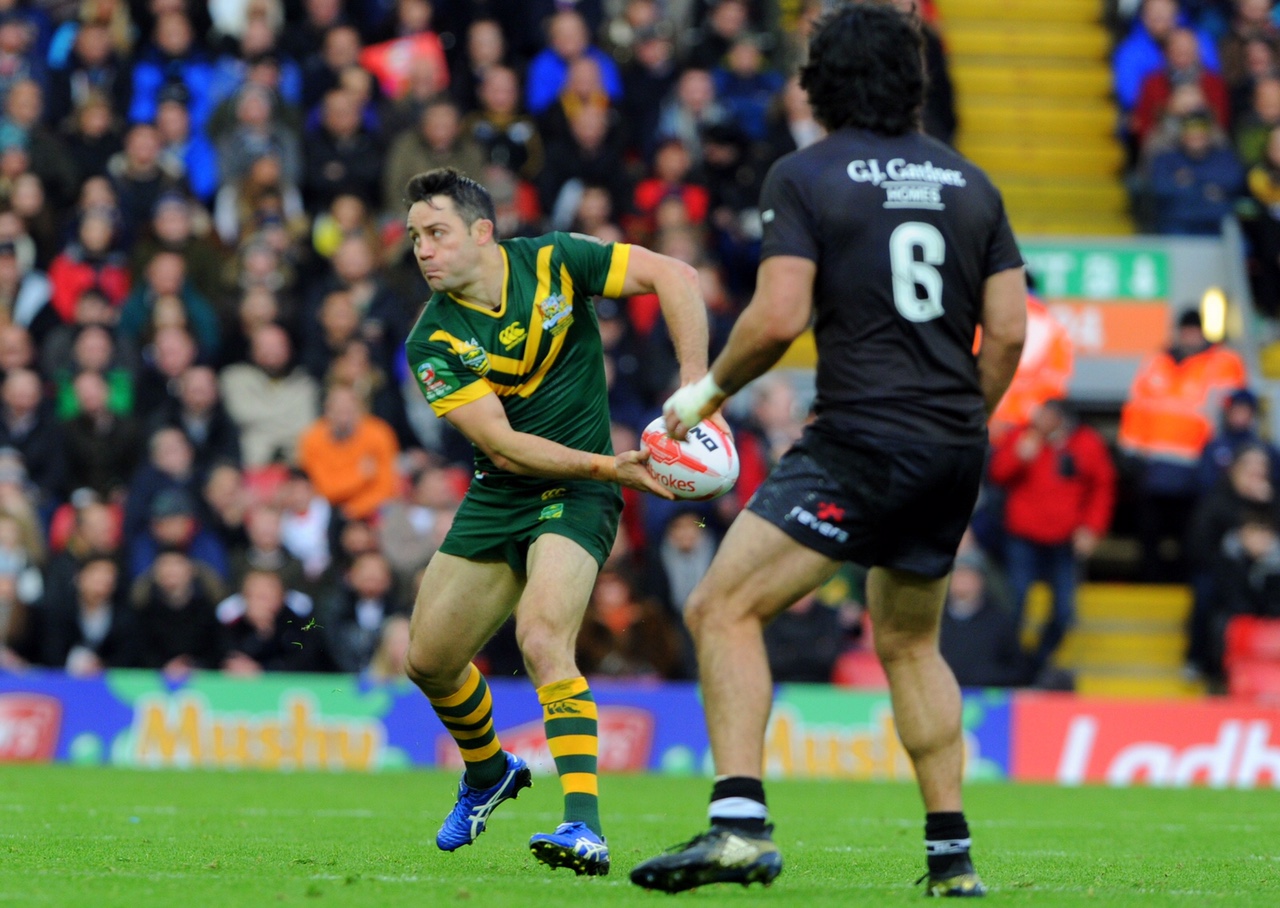 Cronk, the Melbourne Storm, Queensland and Australia halfback, saw off the challenge from three other shortlisted candidates including Storm clubmate Cameron Smith, Darius Boyd and Jason Taumalolo, to earn the accolade presented annually to the world’s best Rugby League player.

The award is decided by a panel of experts including former Golden Boot winners Darren Lockyer (Australia) and Garry Schofield (Great Britain) plus members of the print and broadcast media.
The Golden Boot was first awarded in 1984 to Australian Rugby League legend Wally Lewis.

The award recognises performances throughout the year at club and representative level, with particular emphasis being placed on internationals, where Cronk was one of Australia’s standout stars in their Four Nations triumph in November.

The Kangaroos went through the tournament, involving New Zealand, England and Scotland, undefeated to claim the Four Nations trophy at Liverpool’s famous Anfield Stadium in front of over 40,000 supporters.
Martyn Sadler, the Chairman of League Publications Ltd, the publishers of Rugby League World Magazine, said:

“Cooper Cronk has been an outstanding player for club, state and country for many years, but this year he really demonstrated his outstanding qualities, helping Melbourne Storm to the NRL Grand Final, Queensland to yet another State of Origin success and Australia to the Four Nations title.

“In all those competitions he demonstrated a mastery of halfback play in all its aspects, and proved himself to be one of the outstanding players of his generation who will join a wonderful list of great players who have won the Golden Boot since 1984.

“He is a truly deserving winner of the Rugby League World Golden Boot.

“He was on the shortlist alongside exalted company in Cameron Smith, Darius Boyd and Jason Taumalolo, but he deservedly prevailed when the votes were counted.”

The Golden Boot is currently being made and will be presented to Cooper Cronk at a later date.

1985: Brett Kenny: Played a starring role in Wigan winning the greatest Challenge Cup final of them all before playing in the Blues’ first-ever Origin series win.

1987: Hugh McGahan & Peter Sterling: The Kiwi captained his country to a famous win over Australia in the only Test between the two countries that year while Sterling won two Origin man of the match awards.

1990: Garry Schofield: The first ‘retrospective’ winner of the Golden Boot, having been chosen to receive the award that year only for a sponsors dispute to lead to its cancellation. Schoey had to wait 21 years to finally get the accolade.

1999: Andrew Johns: Outstanding throughout the NRL season and starred for NSW in drawn Origin series.

2000: Brad Fittler: Lifted the World Cup for Australia after Origin success with the Blues. Also helped Sydney Roosters to the Grand Final.

2001: Andrew Johns: Triumphed with Australia in the Ashes and Newcastle in the Grand Final, winning the Clive Churchill Medal.

2002: Stacey Jones: Led the Warriors to their maiden Grand Final before starring in the Test series against New Zealand.

2005: Anthony Minichiello: Brilliant fullback who starred for New South Wales in Origin triumph and for Australia before their Tri-Nations final disaster.

2006: Darren Lockyer: Enjoyed the perfect year, tasting success at club, state and international level as captain of all three sides.

2007: Cameron Smith: Part of two comprehensive wins against New Zealand, was the player of the Origin series and won a Grand Final with Melbourne.

2008: Billy Slater: Succeeded at Origin level although lost finals with Melbourne and Australia. Brilliant throughout the year nonetheless.

2009: Greg Inglis: Won a clean sweep with Melbourne, Queensland and Australia, proving to be the game’s most explosive centre since Meninga.

2011: Johnathan Thurston: A brilliant, if controversial, Man of the Match display in the Four Nations final against England crowned a spectacular year of achievement.

2012: Kevin Sinfield: Captained Leeds Rhinos to the World Club Challenge and Super League titles and England to victory in the Autumn International Series.

2013: Johnathan Thurston: The Australia and North Queensland Cowboys stand-off edged out England forward Sam Burgess to follow up his success in 2011. Thurston caught the attention of the 13-man voting panel with his man-of-the-match performance in the World Cup final win over New Zealand, completing an outstanding series for the 30-year-old. Thurston also took his club side the Cowboys to the NRL play-offs and helped continued Queensland’s stunning run of eight successive State of Origin series wins.

2014: Shaun Johnson: The New Zealand halfback played a starring role for the Kiwis in their triumphant Four Nations campaign which helped him to clinch the 2014 Golden Boot award.

2015: Johnathan Thurston: Australia’s Johnathan Thurston became the first player to win the Rugby League World Golden Boot award for a third time. Johnathan was presented with the award at a glittering ceremony hosted by Leeds Rhinos ahead of their World Club Series clash with Thurston’s North Queensland Cowboys.