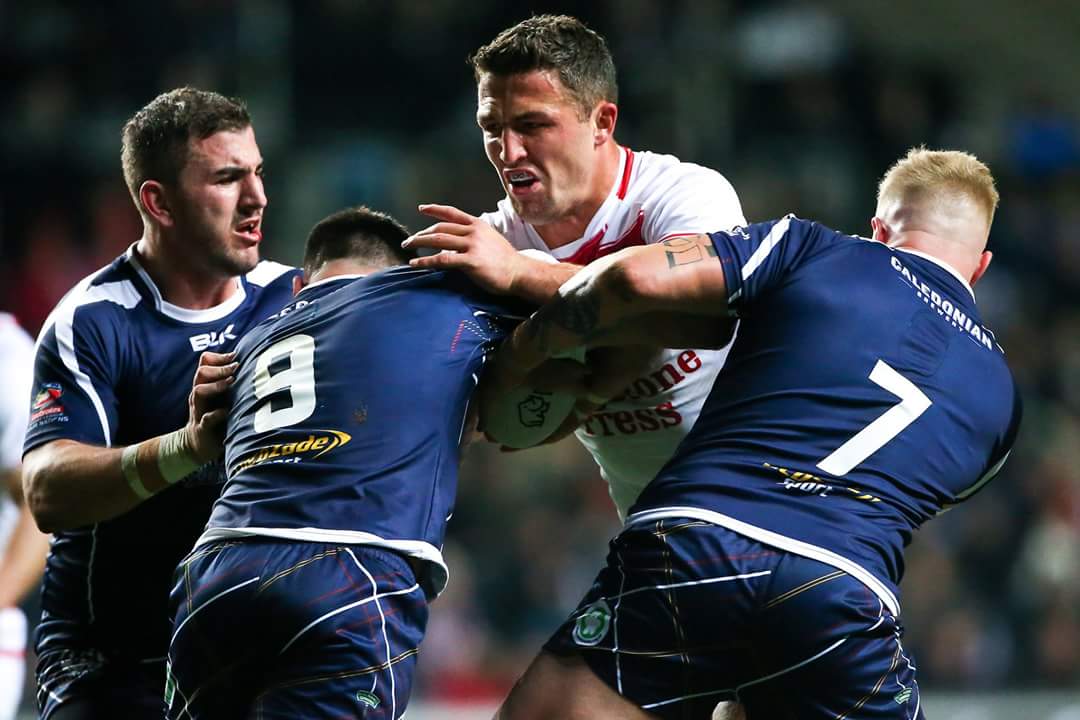 England have kept their Four Nations chances alive with a comeback 38-12 victory over a brave Scotland outfit.

Scotland set the pace early by securing an 8-0 lead in first 25 minutes before England slowly pegged their way back into proceedings.

Following their disappointing one-point loss to New Zealand last weekend, England now need to beat Australia at London’s Olympic Stadium to ensure their place in the tournament final at Anfield on November 20.

They may still be without vice-captain James Graham (knee) who hardly sounded confident when discussing his medial injury during the match.

While a win over the Bravehearts was expected, it didn’t come easy for Wayne Bennett’s Wall of White after Scotland centre Kane Linnett posted first points in the sixth minute.

Scotland winger Matty Russell scored what could prove to be the try of the tournament 18 minutes later by touching down despite his entire body – bar his try-scoring arm – suspended over the sideline.

England finally hit back in the 28th minute through back-rower Elliott Whitehead who easily slotted through Scotland’s defence.

Whitehead made it a double in the 35th minute when he skilfully regathered an ordinary grubber kick from halfback Luke Gale to secure a 12-8 half-time lead.

England followed on from where they left off in the second half and finally capitalised through centre Mark Percival in the 49th minute.

Winger Ryan Hall scored his 30th try in his 30th Test six minutes later thanks to a magic sideways grubber from eventual man of the match George Williams.

Scotland captain Danny Brough was sin-binned in the 57th minute due to a professional foul of which England scored through Jermaine McGillvary immediately after.

Gale scored his maiden Test try in the 62nd minute after being on the receiving end of some slick England passing through Scotland’s middle defence.

Scotland back-rower Dale Ferguson’s try in the 70th minute offered some relief for the Bravehearts though it came at the cost of Liam Hood five minutes later when he was assisted off with a concussion.

England back-rower Liam Farrell capped off the 26-point win when he scooped up a Williams kick that ricocheted off Scotland halfback Danny Addy.