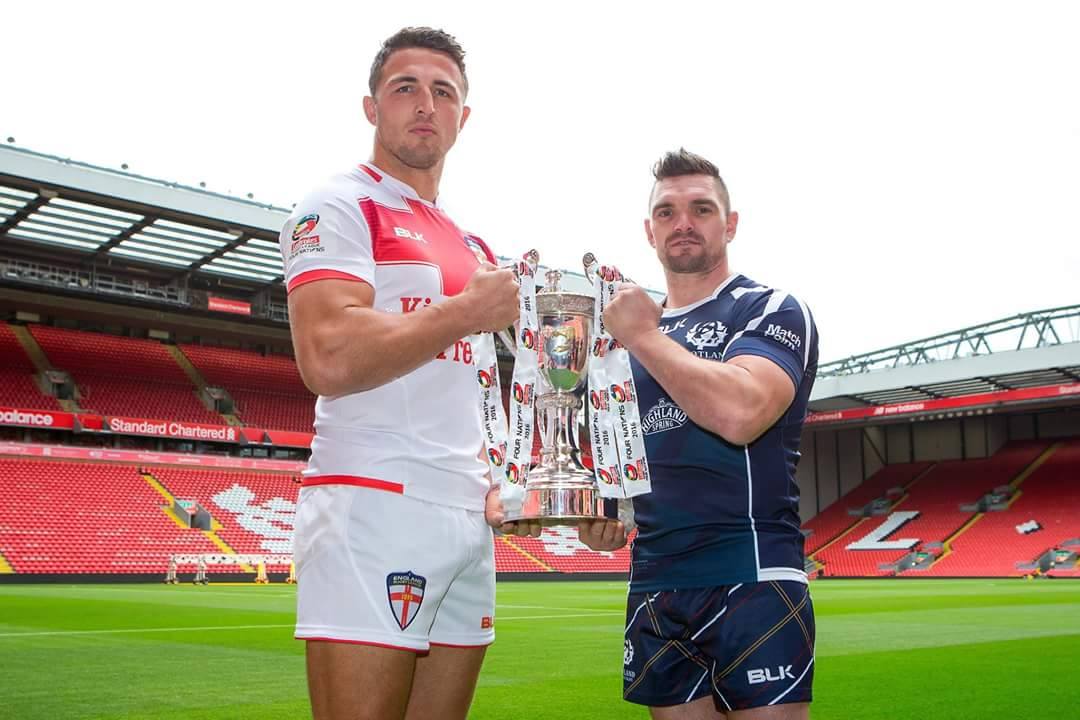 International rugby league will return to the Midlands for the first time in over a century when England and Scotland kick off a blockbuster double-header at the Ricoh Arena in Coventry.

Sunday morning’s match (AEDT) will be the first international Test in the region since New Year’s Day in 1912 when Great Britain were beaten 33-8 by Australia at Villa Park in Birmingham.

Tipped by many to feature in the Four Nations final, England’s chances of playing in the Anfield decider are now on a knife’s edge after their 17-16 loss to the Kiwis in Huddersfield.

Needing to win their next two matches to have any hope of reaching the final, England’s task starts against the Bravehearts in what will be the first clash between the neighbouring nations.

Scotland’s tournament debut started with a heavy – albeit expected – drubbing at the hands of Australia where they appeared overwhelmed in the first quarter of the game, but held their own thereafter.

England will be without James Graham after the prop was officially ruled out with a knee injury, but coach Wayne Bennett is confident he will return in time for the game against Australia. Wigan pair George Williams and Liam Farrell have been added to the squad.

Watch out England: Scotland’s 54-12 loss to the Kangaroos didn’t do justice to the effort shown by the tournament’s first-timers. The Scots fought bravely for the middle 40 minutes of the contest and showed they could match it with their more-fancied rivals at times. Despite the loss, they will be able to take plenty of positives out of the game, and their combinations will be vastly improved ahead of the game against England. They admitted to being gun-shy against the defending world champions, but expect them to play a more open style of footy this time around.

Watch out Scotland: Despite his magical tip-on pass to set up Ryan Hall’s second-half try, England five-eighth Gareth Widdop had very little impact against the Kiwis. He – along with halves partner Luke Gale – failed to take the game by the scruff of the neck, allowing New Zealand’s Shaun Johnson to take control of the game. The duo combined for just 86 running metres – easily the worst output by any of the four halves pairings – but expect that to change against the Scots. Look for both men to try to exploit Scotland’s weakness around the ruck with some nifty inside balls.

Key match-up: Ryan Hall v Lewis Tierney. If Lewis Tierney thought he had a tough time marking up against Josh Mansour then he could be in for a rude awakening when he comes face-to-face with the English wrecking ball. Ryan Hall took his tally to 29 tries from as many Tests with his four-pointer against the Kiwis at the weekend and will be hungry to build on that figure against a Scottish right-edge defence that struggled to contain the Kangaroos.

The history: This will be the first meeting between the sides.

The way we see it: With a must-win showdown against the Aussies looming in their third and final pool match, expect the English to come out firing against the Bravehearts for the first hour or so before taking the foot of the pedal in a bid to conserve some much-needed energy. England by 28.