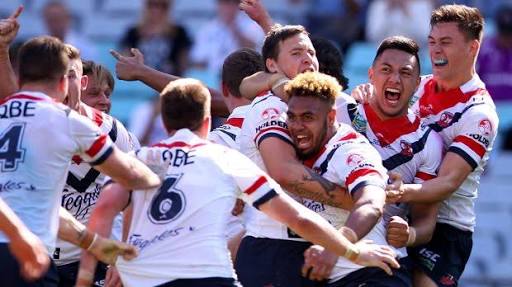 The Roosters have produced the biggest comeback in Holden Cup finals history to stun the Penrith Panthers 30-28 in the Holden Cup grand final.

Things looked to be going to the script for the defending premiers when the unbackable favourites raced out to a 28-6 lead at half-time, but four unanswered converted tries in the second stanza and a late moment of madness sparked the Tricolours to the famous victory.

Trailing by two, and with two minutes left on the clock, the Panthers had the chance to level the scores but centre Braidon Burns inexplicably took a quick tap instead which resulted in a turnover two plays later.

Playing in their first grand final, the Roosters looked dead and buried at half-time but led by workhorse Nat Butcher and fill-in hooker Victor Radley, they fought their way back to etch their names into the history books.

If the Roosters wanted to get back into the contest then they had to take all of their opportunities. And that’s exactly what they did in the opening 10 minutes of the second half.

Butcher gave his side a glimmer of hope when he crashed over early in the second stanza before Sitili Tupouniua smashed his way over from two metres out to cut the gap to just 10 points.

Try-scoring machine Ratu Tuisese had the chance to open up a crucial three-try lead on the hour-mark but put a foot on touch and bounced the ball as he attempted to cross for his 23rd four-pointer of the season.

Fellow winger Daniel Brown looked set to race away moments later on the back of a Roosters error but his winding run came unstuck courtesy of a crucial intervention from Bernard Lewis.

Penrith’s ability to convert their opportunities would come back haunt them as Joseph Manu collected a loose ball to touch down for his second of the afternoon to reduce the margin to four.

With the Panthers pushing for a repeat set, Roosters back-rower Victor Radley blocked a Tyrone May with his legs, scooped up the loose ball, waited for his support, and released Johnny Tuivasa-Sheck for the winger to score his second long-range try in the space of two weeks to put them in front.

That looked to be the end of the drama but it was only the beginning as a late shot by Brendan Frei presented Dylan Edwards with a tricky shot at goal that the Team of the Year reserve pushed wide with three minutes to play before Burns’s moment of madness cost his side any shot at victory.

There were some early nerves for the first-time grand finalists as winger Johnny Tuivasa-Sheck misjudged a high kick, and despite his best efforts to get out of the in-goal, was bundled into touch metres out from his own try-line.

The Panthers should have made him pay from the ensuing set but experienced back-rower Kaide Ellis put down a certain four-pointer when he spilled a lovely short ball from Soni Luke under the posts.

Unperturbed by the slow start, it was the Roosters who opened the scoring as Jesse Marschke accepted a glorious offload from Reuben Porter before releasing speedster Joseph Manu who showed enough speed to scorch down the sideline.

Braidon Burns looked set to level the scores for Penrith but couldn’t reel in what appeared to be an inch-perfect kick, but the Panthers didn’t have to wait much longer as his centre partner Christian Crichton strolled over to make it 6-all with his 10th try of the season.

That was the spark the defending premiers needed as the Panthers piled on two more tries in quick succession to open up a 10-point buffer after 25 minutes.

There was nothing spectacular about the first as Corey Waddell scooped up a loose pass form the Roosters to race away untouched, before an Oliver Clark offload finished in the hands of Burns who powered his way over to make it 16-6.

There was controversy shortly after when Jarred Anderson’s effort was rubbed out after a Panthers captain’s challenge saw the live decision of ‘try’ overturned because Daniel Burns had been tackled in the air.

Grant Garvey sent a scare through the Roosters camp when he stayed down with what looked like a dislocated shoulder, and the Panthers added insult to injury when Kaide Ellis crashed over with pure strength five minutes before the break.

That wouldn’t be the end of the first-half carnage as Wayde Egan burrowed over from dummy-half to cap off a five-star 40 minutes to give his side a commanding 28-6 lead at the interval.

But the Roosters never gave up and rallied to pull off the stunning upset.