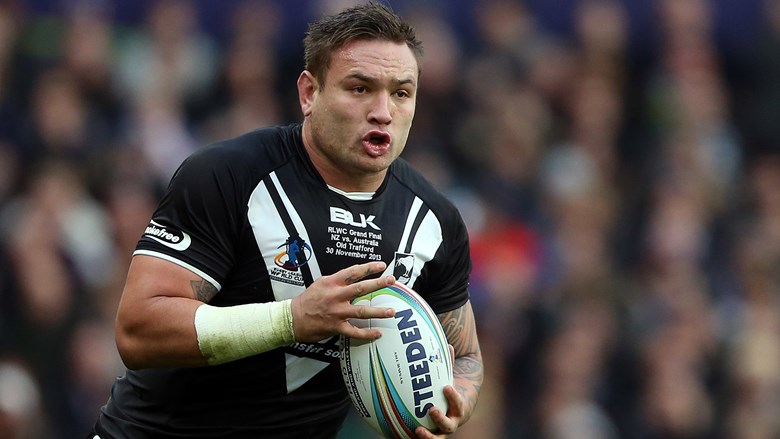 This may only be the train-on squad, powerhouse prop Jared Waerea-Hargreaves is buzzing just to be back in the NZ Kiwis conversation.

Plagued by inconsistent form for the national team and a series of injuries, JWH hasn’t pulled on the black jersey since the 2013 World Cup final, but was today named in a wider group to prepare for this year’s Four Nations tournament in England.

“I’ve got goose bumps,” he insisted, soon after the announcement. “I’m looking at my arm and I’m feeling quite emotional.

“I’m a very proud man. It has been a while and I’m super excited to even be in the mix again, with a chance of wearing that jersey at the end of the year.”

Waerea-Hargreaves is a veteran of 17 tests for New Zealand between 2009-13, but admitted he had matured considerably since his last international outing.

“Becoming a father has given me a wider perspective on things. Also, going through what I’ve been through with recent injuries has made me hungry to come back.

“That’s shown me what it takes to become more of a professional athlete.”

Kiwis coach Stephen Kearney concedes Waerea-Hargreaves would have been considered much sooner, if not for injury. Off-season knee surgery rule him out of the 2015 England tour and this year’s Downer Test against Australia.

But JWH knows the issues went much deeper than injury and form.

“To be honest, it was more about just focusing on myself and channeling my emotions effectively. I think I’ve got that balance right now.”

Twenty-three players have been named in the first instalment of NZ Kiwis wider-squad selections for the test against Australia next month and subsequent Four Nations campaign in England.

Liu, Takairangi and Thompson have been part of Kiwis squads before, without actually taking the field.

“For a lot of them, it will be about getting experience and training alongside guys like Jared, Simon Mannering, Shaun Kenny-Dowall and Jason Nightingale,” said Kearney.

“It’s about introducing them to the Kiwis environment.”

The wider squad currently consists of 36 players and will be named in instalments as their teams drop out of NRL premiership contention over coming weeks. The size of that squad will also fluctuate, depending on injuries and other unavailabilities that arise.

A final travelling squad of 24 will be named during the week after the NRL Grand Final on October 2.