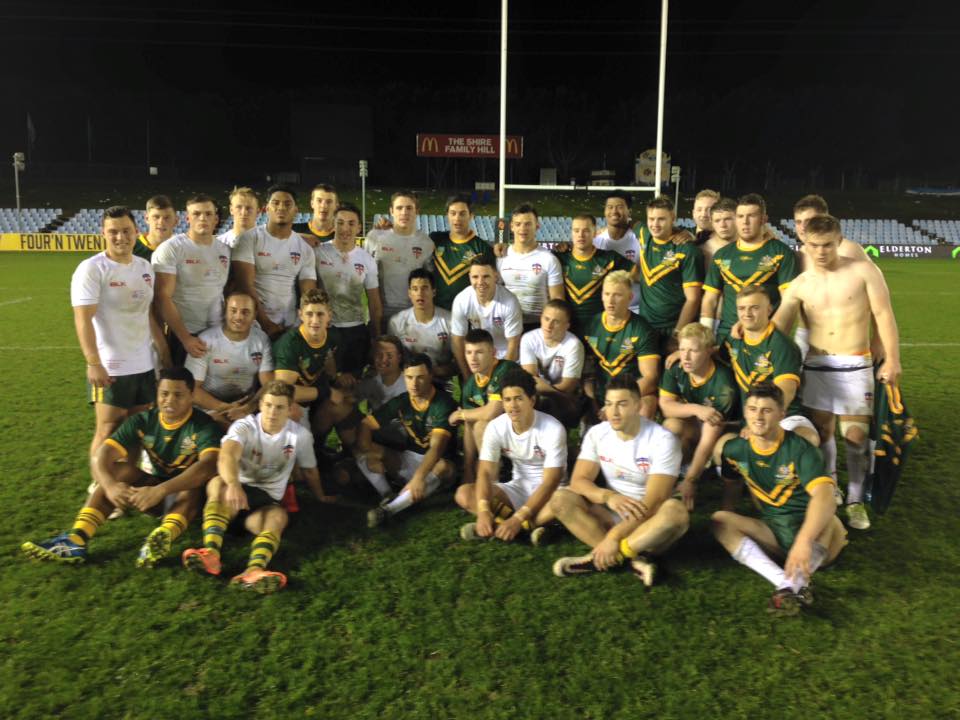 Australia wrapped up the two-match series with an emphatic victory over England at Shark Park, Cronulla. They ran in nine tries in a ruthless performance, taking every scoring opportunity that came their way.

For long spells England were dominant but undid much of their good work by gifting their opponents tries at crucial times.

A big crowd had stayed on after the Cronulla v Canberra game on a mild night in Sydney to watch the stars of the future. Australia opened the scoring after four minutes when they took advantage of a penalty to launch their first attack. They moved the ball smartly to the left enabling Nic Cotric to crash over with Sean O’Sullivan adding the extra.

Cotric collected another when England defenders failed to deal with a kick through and the centre pounced on the loose ball to make it 10-0. The visitors got their first points on the board after eight minutes when a penalty gave them a good attacking platform and hooker Josh Ganson scooted over from dummy-half.

Following a mistake, they were under attack from the re-start but defended their goal line well. Having soaked up the pressure they went up to the other end and forced a drop out but were unable to take advantage, a neat grubber by Ganson just rolling dead.

As the game moved in the second quarter England began to dominate, some great defending forcing their opponents into errors. A fine 40/20 from Morgan Smith put them on the attack once again with Ganson sending Mikolaz Oledzki crashing over.

Smith’s conversion put his side 12-10 ahead and they were soon on the attack again forcing another goal-line drop out. But disaster struck when a kick through was scooped up by Australian stand-off Lachlan Lam who sprinted 90 metres to touchdown. O’Sullivan converted to put Australia four points ahead.

England’s defence was under pressure once more and finally cracked when Zak Lomax fielded a crossfield kick to score. Just before half-time they struck again through Michael Tupou and with O’Sullivan converting both, Australia led 28-12 at the interval.

Australia increased their lead early in the second half when they were awarded a penalty near the England line. A long pass allowed Dean Blore to score out wide.

England worked hard to get back into the game and midway through the half Craig Mullen touched down but the referee adjudged the pass forward. But any thoughts of a fightback were dashed when Lachlan Lam jinked his way over under the posts. O’Sullivan again converted to make it 38-12.

England again put pressure on their opponents’ line but were unable to get that elusive score. Australia wrapped up the contest when Contric ran 70 metres to collect his hat-trick and Tiumavave Afualo forced his way over with O’Sullivan converting both.