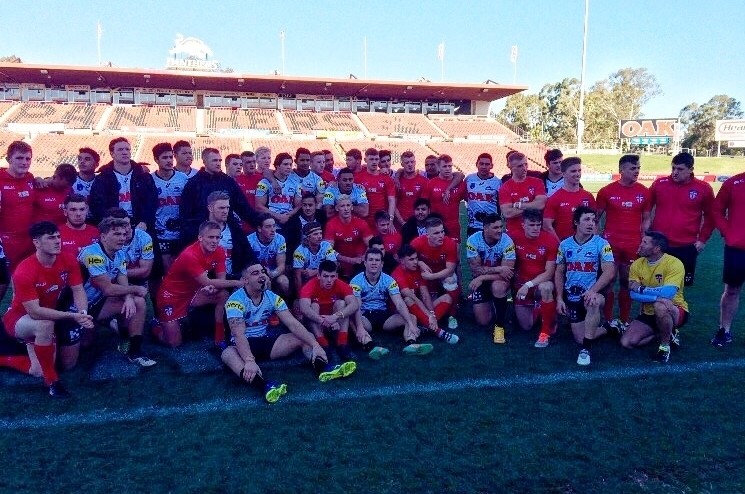 England got off to a winning start on their tour of Australia with a strong performance against a tough Penrith outfit. Played in sunny but windy conditions at Pepper Stadium, the tourists put in a strong defensive performance and took the scoring opportunities that came their way.

Before the kick-off a minute’s silence was held for the father of Judah Mazive who passed away two days ago. Judah has returned home to England.

In a tight, nervy opening both sides looked to assert their authority but after 12 minutes a penalty gave the Panthers their first opportunity for an attacking set deep in the England. They made the most of it with forward Mark Laban crashing over by the left of the posts to give his side a 4-0 lead.

But England bounced back when successive penalties gave them a chance to test the home defence. They then forced an error and the pressure eventually told when Jack Wells crashed over from a short ball by Josh Ganson. Rob Fairclough added the conversion to put the visitors a 6-4 ahead.

Midway through the half England found themselves under pressure but their defence held firm and they countered minutes later, a short ball from Morgan Smith sending Cameron Smith in under the posts. Fairclough added the extras to give his side an eight-point lead.

But just before half-time they found themselves under pressure again and this time they cracked, Brad Gant forcing his way over form short range. Toby Wescott converted to make it 12-10 at half-time.

England again found themselves under pressure at the start of the second half thanks to a knock on in the opening set followed by a penalty but they absorbed the pressure and forced an error through their aggressive defence. They hit back when a great offload from Joe Wardill to Ryan Jones took England close but Jones was stopped short. However, from the play the ball, James Batchelor hit a great line on the short side to crash over and put the visitors six points in front.

England’s defence was tested once again when an offload from Jake Tago to Toby Westcott gave the Panthers good field position but once again it held firm. This sparked a period of intense pressure on the England line but they were equal to the task.

The siege was lifted when a Jack Wells offload put Mikolaj Oledzki through a gap and he found Jez Litten in support. As the Panthers scrambled back to cover the break, they were penalised for offside. A neat move from the subsequent penalty saw Morgan Smith reach out to score just right of the posts with the conversion by Fairclough easing them 22-10 ahead.

But England couldn’t relax as an error in the next set saw them turn over possession and with good ball the Panthers sneaked over in the far right corner through Harrison Leonard. The conversion from Toby Westcott once again brought them to within six points and going into the last 10 minutes they continued to test the England defence.

Another superb defensive effort kept the hosts at bay and England countered with Jack Wells being held up close to the line. However, with five minutes remaining Callum Field exploited a tiring Panthers defence to cut through and score to the right of the posts leaving Fairclough to make it 28-16 with the conversion.

The Panthers had the final say with a try from Thomas Lofts which Westcott converted but it was too little, too late.

England Academy coach Andy Kelly said: “I thought the boys coped really well. The physicality was consistent throughout the 80 minutes. When you think that Penrith used 28 players in that period of time, it meant that we had to work really hard.

“The win was a little bit narrower than we would have liked, but in terms of the physical effort and the preparation for the Test Match it was a pretty good work out.

“The two weeks we’ve had prior to this game have been fantastic. The staff have worked hard and the players have understood what we want from them. The environments we’ve been in have been great and the preparation has been right for the boys. We’re now into a big, big week so the boys are ready for the Test Match.”