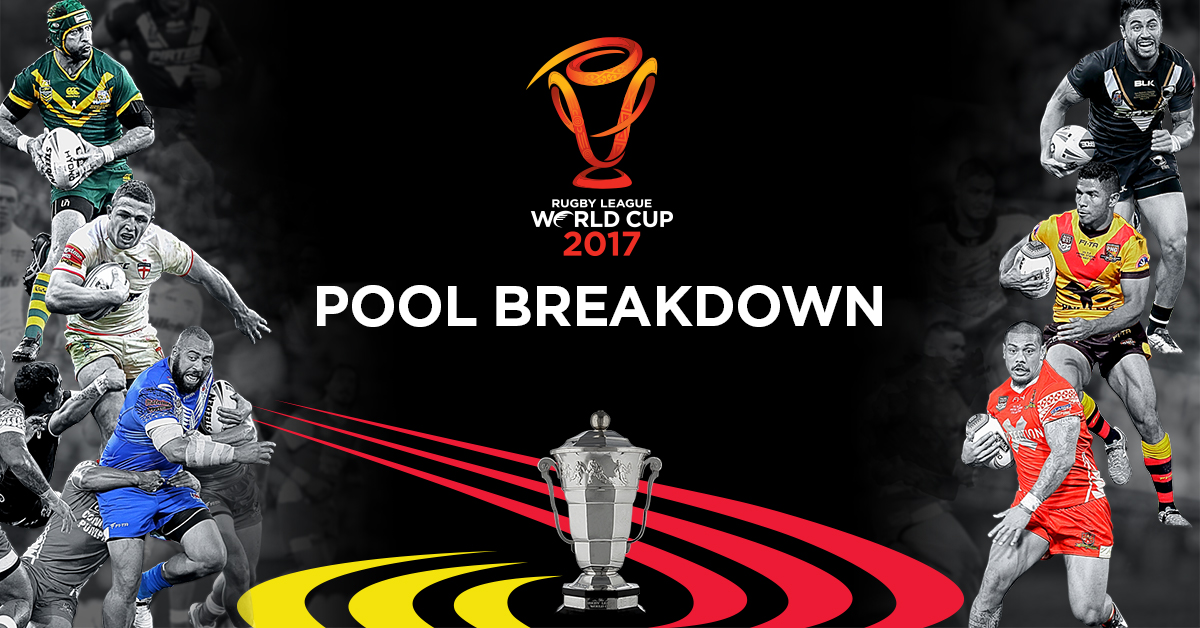 The 2017 Rugby League World Cup draw has been announced, with 28 games to be played across Australia, New Zealand and Papua New Guinea in four pools.

The three host nations Australia, New Zealand and PNG will play all their pool matches in their home country, while the European qualifying in October will finalise the teams in Pools C and D.

The 10-time and reigning world champions Australia will take on England at Melbourne Rectangular Stadium in the opening game of the tournament and the stakes couldn’t be higher.

The Kangaroos start their defence against the Wayne Bennett coached England knowing the winner of the opening game is highly likely to take out Pool A.

The winner of Pool A will stay in Australia right through to the World Cup Final at Brisbane Stadium. They’ll play their first quarter-final in Darwin against the third placed team from Pool B.

The team who finishes second in Pool A is likely to face a tricky quarter-final against PNG in Melbourne and may then have to take on New Zealand in Wellington in the semi-finals.

It makes the opening game of the tournament critical for both Australia and England.

While Australia will be favourites in Pool A, England will not be easy to beat and will be looking to atone for their heartbreaking final minute loss to New Zealand in an epic World Cup semi-final played at Wembley four years ago.

England were also the only team to score tries against Australia in the 2013 tournament and gave the Kangaroos a real scare. They’ll be looking to perform better than they have on previous tours away from England.

There’s no denying France and Lebanon are in a tough pool, but with three finals places to play for, a couple of good performances could jag them a quarter-final berth.

France were once a rugby league powerhouse, and while those days are long gone, they have shown that they are heading in the right direction winning five of their last six internationals, while Lebanon is likely to be led by NSW State of Origin hooker Robbie Farah and will have some vocal support.

The Kiwis – the No.1 ranked team in the world – have a really tough pool with the likes of Samoa, Tonga and Scotland to contend with.

The last time the World Cup was in the Southern Hemisphere, the Kiwis shocked the Kangaroos in the final and they’ll be hoping history repeats.

They will be the overwhelming favourites to top the pool and stay in New Zealand until the World Cup Final at Brisbane Stadium but it won’t be easy.

Samoa and Tonga continue to improve and certainly have the strike power to cause some massive boilovers in this tournament.

Samoa gave the Kiwis are real scare in the 2013 World Cup and they’ve beaten Tonga in their last two internationals, meaning they’ll be looking for a top two finish in Pool B.

While Scotland will be the massive underdogs in this pool, don’t write them off, they are more than capable of causing a few headaches.

The Scots were the surprise packet of the 2013 tournament, going through their group undefeated with victories over Tonga and USA as well as drawing with Italy. They ran into a red-hot New Zealand side in the quarter-finals to end a very successful tournament and they’ll be looking to equal that achievement in 2017.

PNG will be overwhelming favourites to win their way to the quarter-finals with three pool matches at home, but we still do not know who will join them in Pool C.

The Kumuls have been disappointing in their last few tournaments, but had a morale boosting win over Fiji in their mid-year Test to show signs they may be back on the rise.

Their opponents in Pool C are still going through European qualifying which will be finalised at the end of October – see below.

There is only one team that advances from this Pool and they’ll take on the team that finishes second in Pool A in the quarter-finals.

Fiji have made the semi-finals of the last two World Cups and they’ll be keen to stretch that record to three in a row.

USA surprised many in the 2013 tournament to advance to the quarter-finals before they ran in to a red hot Australian team.

The third team in this pool will come from European qualifying explained below.

The winner of Pool D will take on the second placed team from Pool B in a quarter-final showdown.

How the European Qualifying works

There are two qualifying groups, each with three teams, with the winner of each group advancing to the World Cup to join PNG in Pool C.

The runner-up in each group will play off for the final World Cup spot with the play-off winner to join Fiji and USA in Pool D.