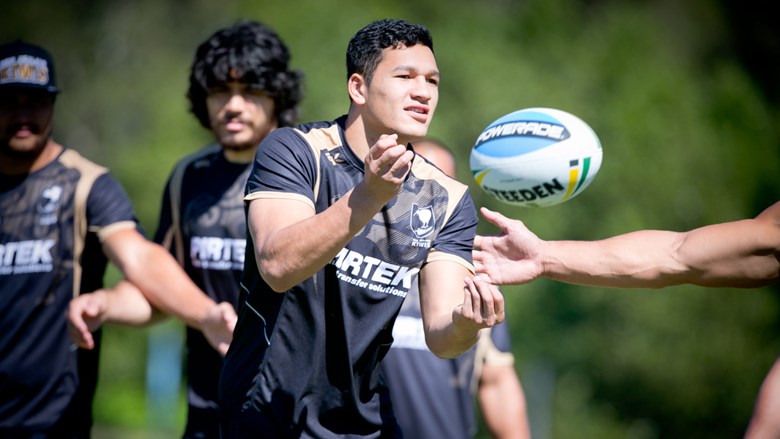 Penrith wing Dallin Watene-Zelezniak will hope third time is the charm, as he accepts another opportunity to pull on the NZ Kiwis test jersey this week.

The great grandson of NZ rugby league legend Steve Watene has come into Kiwis camp twice before, only to be denied his starting spot by injury (2014 Four Nations) and suspension (2015 Anzac Test).

He also missed the 2015 England tour with a collapsed lung, but has earned another chance in an 18-man squad named by Kiwis coach Stephen Kearney for next Friday’s Downer Trans-Tasman Test against Australia in Newcastle.

“When I texted Dallin to tell him, he was really, really excited,” says Kearney. “We’ll keep him away from the beach. In 2014, we took him down to the beach for a recovery, and he ended up rolling his ankle and breaking a bone in his foot.

“He a kid that’s been in our Junior Kiwis programme and I remember watching him score four tries against the Junior Kangaroos a few years ago. He’s one of those kids that has always been on the cusp of making it, now he finally gets that opportunity and I’m sure he’ll do a wonderful job for us.”

Watene-Zelezniak (20) and bruising Parramatta forward Manu Ma’u are the newcomers on a roster aiming to defend its world #1 ranking, retain the Bill Kelly Cup and achieve a fourth consecutive win against world champions Australia.

“Two years ago, we had a few players ruled out through injury and Manu was right in the mix then, but injured his hand,” says Kearney. “I just think he’s shown consistency in his football since being at Parramatta and it’s an opportunity for us to grow that depth of talent that we have.

“The way he’s been playing is certainly what we’re after.”

With regular captain Simon Mannering sidelined by injury, Melbourne prop Jesse Bromwich (Kiwi #775), a 17-test veteran since 2012, will lead the side for the first time.

“You just need to look at Jesse’s performances over the past two years, when he’s elevated himself to one of the premier front rowers in our game and at international level,” says Kearney.

“But it’s more than his performances – it’s everything that he brings to the table. He’s a wonderful leader in his own right.

“He ticks all the right boxes. We certainly saw that in England, where Adam Blair and Issac Luke were our captains, but Jesse was part of the leadership group and really stepped up to the plate.

“It was just a matter of time that he assumed the role we’ve given him this week.”

North Queensland powerhouse Jason Taumalolo returns to the national side, after missing its entire 2015 campaign, while NZ Warriors half Shaun Johnson and Canterbury Bulldogs lock Greg Eastwood are back, after missing the England series.

“I’m super happy with who we have and the one thing we’ve built over the last two years is, regardless who we have in the jumper, we have a responsibility and duty to go out there and perform,” says Kearney.

“If we take close to our best performance to the contest on Friday, then I’m super confident we give ourselves a great opportunity.”