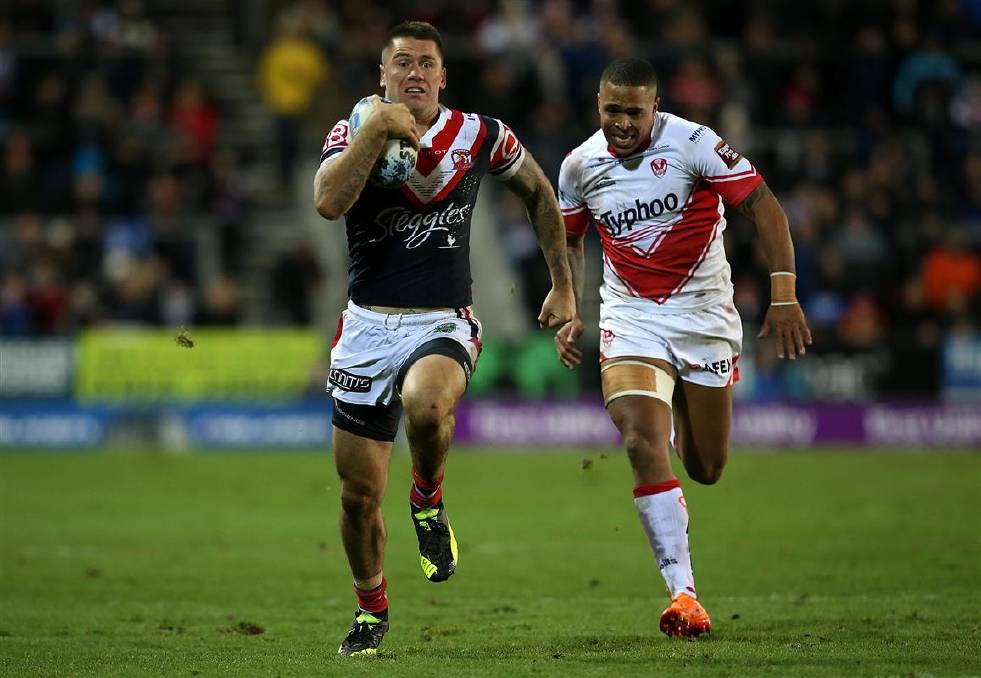 The NRL is one up in the World Club Series against their Super League counterparts after Jayden Nikorima played a starring role in Sydney Roosters’ 38-12 thrashing of St Helens at Langtree Park.

With regular halfback Mitchell Pearce stood down by the Roosters, Nikorima made sure Tricolours fans were pumped up for the season with the 19-year-old former Bronco having a hand in five of his side’s seven tries.

After an early tackle gone wrong saw him leave the field for a concussion test, Nikorima returned just in time for the Roosters’ first try in the 15th minute when Kane Evans carried three Saints players over the line with him to score.

It wouldn’t have been possible if not for Latrell Mitchell’s run the tackle prior, with the Roosters winger’s long, winding foray putting St Helens’ defence in all sorts of trouble as the rookie broke six tackles.

Aidan Guerra scored his first try of the match when a Nikorima kick ricocheted off Saints captain Jon Wilkin into the hands of the Roosters back-rower to score in the 20th minute.

Nikorima and Guerra combined again five minutes later when the five-eighth sent his right-side forward into space. Offloading to Jake Friend, the Roosters captain linked up with Jackson Hastings who sent Blake Ferguson in under the posts – referee Ben Thaler missing the halfback’s dubious pass to his teammate.

The Roosters made it a 22-0 half-time lead when St Helens fullback Jack Owens failed to retrieve Luke Walsh’s bomb. Sam Moa picked up the scraps, and the prop’s quick pass sent Nikorima on a 40 metre run down field.

Despite Adam Swift’s presence, Nikorima showed class beyond his years when he passed back inside to fellow recruit Dale Copley, the former Bronco able to make up the difference to score.

Former NZ Warrior Dominique Peyroux gave Saints fans some relief when he scored his side’s first try two minutes into the second half after Blake Ferguson failed to latch on to a Wilkin bomb.

Nikorima was back at it in the 51st minute when he found space outside of Wilkin to send Shaun Kenny-Dowall over to score.

Two minutes later, Guerra scored his second when Kenny-Dowall’s offload from the ground was given the all clear by the video referee Richard Silverwood.

Not even a minute after Dylan Napa was sin-binned for a high shot on Swift in the 62nd minute, Peyroux scored his second try out wide.

A wayward pass from Saints back-rower Atelea Vea provided the cherry on top of the Roosters’ win after it was intercepted by Daniel Tupou in the 67th minute, the winger winning the 90 metre race to the tryline.