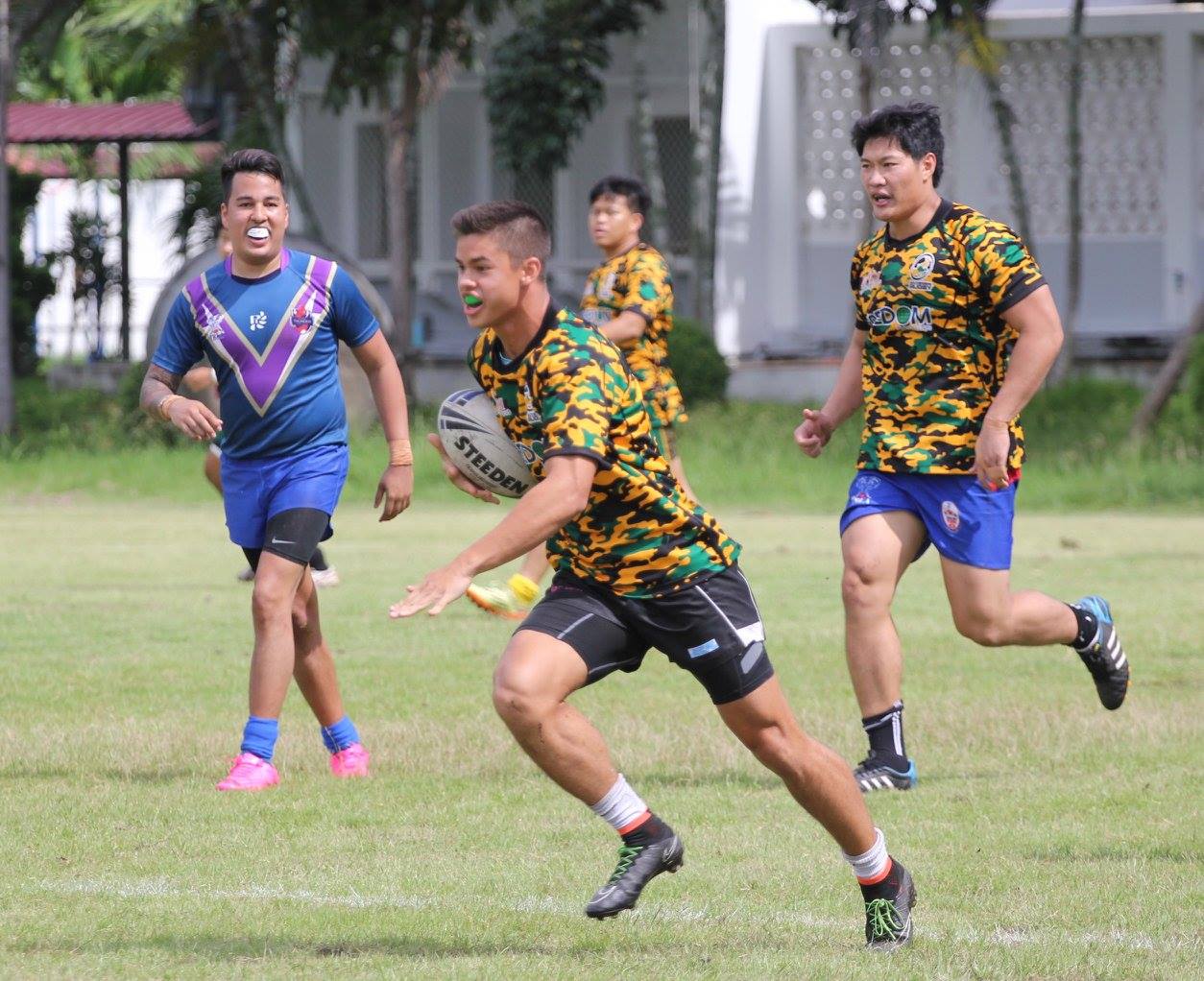 The inaugural Thai National 9’s Rugby League Championships was held at the Royal Thai Naval Academy in Bangkok on October 11.

The six team tournament is for Thai National or Heritage players only and is designed to introduce new players to Rugby League in Thailand.

Esarn Thunder and Asoke Ale kicked off the pool matches and in a tight contest , the Thunder held on to win 6-0.

Bangkok Southerners, an expat club fielded an all Thai team for the first time and were too good for Bangkok Yak Sa 24-10 in their first pool match.

Esarn ensured they won their pool with a 10-6 win over Rugby League newcomers Ubon Wild Bees who made the trek from North East Thailand.

Another new team to Rugby League, Navy, caused a huge upset with a 6-4 win over the Southerners.

Navy went on to win Pool B with a hard fought victory over Bangkok Yak Sa whilst the Wild Bees had their first victory with a 12-4 win over Asoke.

The first Cup semi final was an amazing game of 9’s between Bangkok Southerners and Esarn Thunder. Both teams went try for try then in the dying stages 16 year old Kim Goodburn won the race to a kick and scored under the posts which was converted putting the Southerners into the final.

The second Cup semi final was between the two newcomers to Rugby League, Navy and Ubon Wild Bees. A try in each half was enough to give Ubon a hard fought victory and a place in the final.

PLATE FINAL:
Asoke Ale and Navy contested the Plate Final with Asoke opening the scoring and converting. However, two second half tries to Navy ensured they won their first award in Rugby League as Plate winners with a 12-6 victory.

TROPHY FINAL:
Bangkok Yak Sa and Esarn Thunder continued their rivalry from last year’s Phuket 9’s, however the Thunder proved to strong in this encounter. Three first half tries to Esarn stamped their authority but Yak Sa outscored the Thunder in the second half but it wasnt enough as Esarn won the Trophy Final 22-12.

CUP FINAL:
The first ever Thai National 9’s Cup Final was contested between Bangkok Southerners and Ubon Wild Bees and what a final it was. Young Kim Goodburn opened the scoring for the Southerners but Ubon quickly replied with a try out wide to Nuttiwat Boonbaweyoswat. Southerners and Ubon traded further tries then Southerners scored a crucial converted try right on half time to lead 14-8. Both teams through everything at each other in the second half and tries were hard to come by. Southerners clinched the final with a long range try with great support play. Ubon scored a converted try right on full time but it was the Southerners who prevailed 20-14 in a classic final.

Bangkok Southerners were crowned the first Thai National 9’s Champions however it was the emergence of teams such as Ubon, Navy and Asoke that was eye catching. The tournament produced just under 90 Thai players and they produced some thrilling Rugby League where every game was entertaining and and a contest.

Chanathun Yimlamai from the Southerners was named player of the tournament.