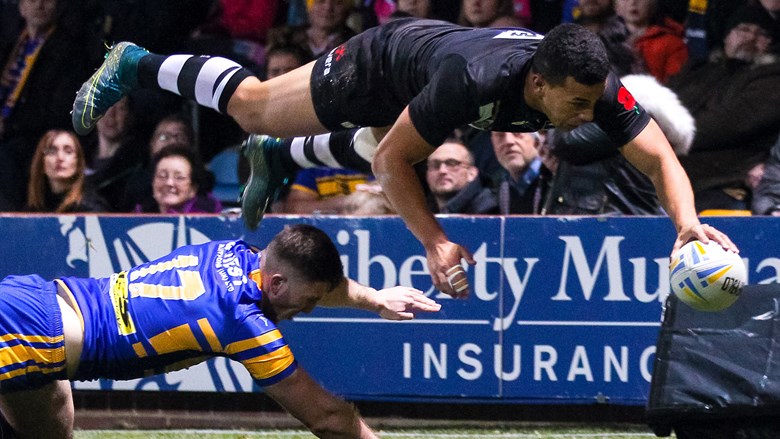 Kiwis power to victory over Rhinos

Dummy-half duo Issac Luke and Kodi Nikorima were the undisputed stars, as New Zealand carved out an at-times scrappy, but ultimately convincing 34-16 victory over a spirited Leeds Rhinos outfit at Headingley Stadium.

The home side posted the first try and snatched the lead again early in the second half, but the Kiwis’ attacking class eventually told in a seven-tries-to-three result, with new co-captain Luke and debutant Nikorima at the forefront.

The packed house at Headingley was worked into a frenzy before kick-off, as departing club legends Kylie Leuluai, Jamie Peacock and Kevin Sinfield – along with guesting former Rhinos greats Adrian Morley and Ali Lauitiiti – were presented to the 20,158-strong crowd.

In their first match as Kiwi co-captains, Luke and Adam Blair led a stirring haka, which was also rapturously received by the Leeds faithful and a sprinkling of New Zealand fans.

The under-strength Rhinos, missing England stars Ryan Hall, Kallum Watkins and Zak Hardaker, as well as the retiring Sinfield and Peacock, signalled their intentions early by moving the ball at every opportunity. Leuluai was denied a fairytale try against his countrymen in the 10th minute, courtesy of a forward-pass call.

Roger Tuivasa-Sheck’s peerless last-line defence was required on several occasions during the opening exchanges, snuffing out exciting breaks by Rhinos hooker Robbie Ward and his opposing fullback Ashton Golding. Luke and Ben Matulino made big inroads for the tourists in the free-flowing opening quarter of the match.

A succession of handling errors frustrated the Kiwis’ objective of getting a roll on and the Rhinos were rewarded for their consistent enterprise with the first try in the 27th minute. Former Broncos and Warriors centre Joel Moon brilliantly scooped up a Danny McGuire grubber to dot down for the belated first try and a 6-0 lead for the hosts.

The try stunned New Zealand into action. Jason Nightingale made a long break in the Kiwis’ ensuing set and scored their first try with a trademark finish out wide, after some fine work inside by debutant centre Jordan Kahu, from the resultant line drop-out.

Luke drilled the conversion from the sideline and helped the Kiwis take a 10-6 lead into the break, making another dummy-half bust to send Kahu away. The 24-year-old produced an acrobatic leap to touch down in the corner just seconds before the halftime hooter.

New Zealand was quick out of the blocks in the second stanza, but the visitors were unable to capitalise on more electrifying ball-running from Luke.

A couple of unfavourable refereeing decisions put the Kiwis on the back foot again and they received another wake-up call 13 minutes into the half, when Moon wrestled his way over for a double.

Rhinos halfback Jordan Lilley slotted the conversion from out wide for a 12-10 advantage.

The Kiwis hit the front again with 18 minutes left, however, as Nikorima made an immediate impact after replacing Luke, holding up a short ball for Jesse Bromwich to stroll over under the posts.

Tuivasa-Sheck, who made the break in the lead-up to Whare’s score, crossed for the Kiwis’ third try in the space of seven minutes a couple of sets later.

The Rhinos hit back in the 70th minute, via a piece of magic from former Kiwi second-row stalwart Lauiti’iti, backing up Golding and offloading superbly for winger Tom Briscoe to score in the corner.

But Bromwich returned the favour for Nikorima, who capped a dream debut off the bench by stepping his way over from close range, to clinch the result with three minutes left.

Tuivasa-Sheck put an exclamation mark on the win with his second try in the dying stages, causing havoc on the Kiwis’ left edge once again and icing an 18-point success.

In special post-match scenes, Leuluai and Lauitiiti joined the Kiwis side as they performed another haka in front of the Headingley Stadium grandstand, capping a grand occasion where Leeds celebrated the famous ground’s 125 anniversary.