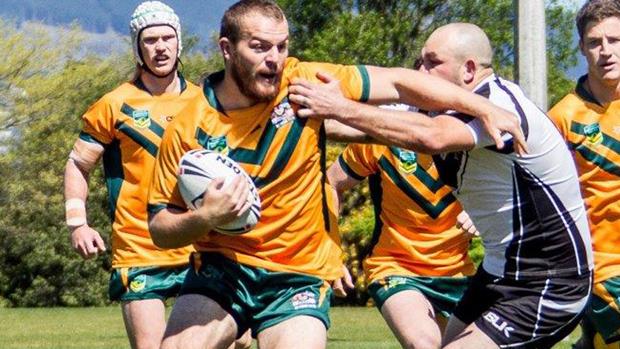 The first of the two-match series went right down to the wire with the NZ team drawing to within a point with a converted try in the 78th minute but the courageous Australian defence held strong despite being down to 16 men for most of the game.

After scoring the opening two tries of the game winger Travis Drury copped a heavy hit and was forced from the field with concussion midway through the first half and required stitches in hospital afterwards, coach Mark Gliddon praising the team’s defence after less than a week together.

“I thought our goal-line defence was outstanding,” Gliddon told NRL.com.

“They had a fair bit of footy on our line and we just kept putting bodies in front of them and we played really brave.

“We didn’t have a big pack today, we had two front-rowers in our 17 and we played a few guys off the bench up front who don’t normally play in the front row and against a big side they did a terrific job.

Drury’s two tries in the first 21 minutes gave the Australian team an early 10-0 advantage before the locals hit back with two tries of their own to take a 12-10 lead into half-time.

Centre Mick Pearsell put the Aussies back in front with a try just after half-time but the Kiwis were again quick to hit back, levelling the scores at 16-all with 29 minutes still to play.

Ten minutes later former Cronulla under-20s representative Bennett was on the end of a 40-metre movement from the Australian team and then coolly slotted a field goal in the 76th minute that gave his team a 23-16 lead and the crucial extra point they would need.

Wynnum fullback Mitch Lollback was named Man of the Match with prop forward Nick Timm another of the Aussies’ best, playing all but 10 minutes against a much bigger Kiwi forward pack.

Given injuries to forwards Jack Burke and Ethan Price suffered in Sunday’s warm-up game and the doubt over Drury’s ability to back up after a head knock the Australian team is facing the prospect of going into Sunday’s second Test in Greymouth with just 16 fit players available.