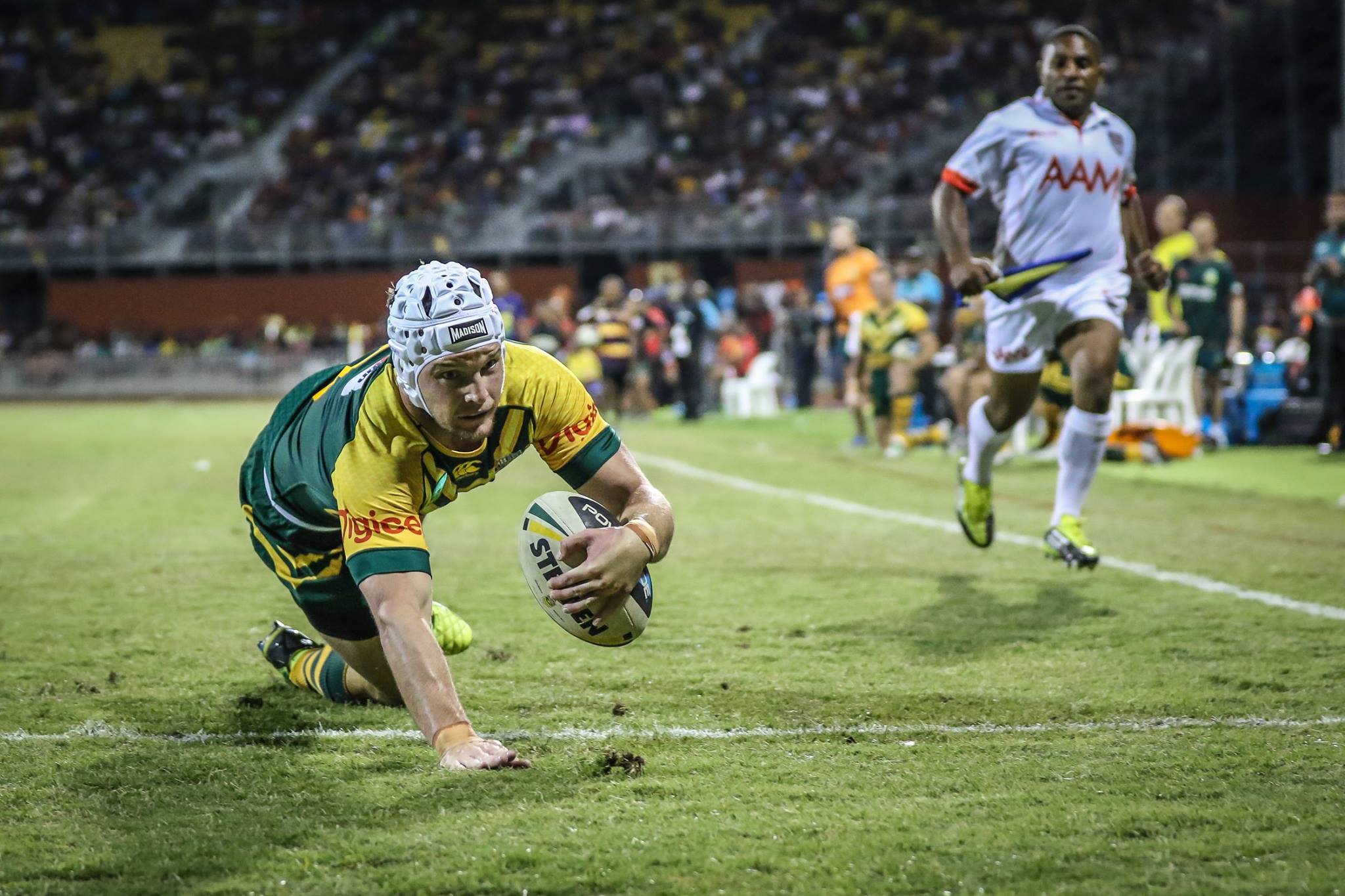 The game was enjoyed in front of a packed crowd of more than 18,000 fans at the Sir John Guise Stadium in the nation’s capital, with everyone excited to see their heroes on both sides finally take the field after a much anticipated build-up.

It was not the start the hosts were looking for, dropping the ball from the kick-off. However they quickly recovered to match the intensity of the Australians in the opening few minutes.

The Australians soon got down to business, with winger David Nofoaluma opening the visitors’ account in the 10th minute.

Jarrod Croker followed quickly after, posting a try in the opposite corner to make the score 10-0 after 16 minutes.

PNG kept relative pace with the Australians, holding out two tries in the first half and staging several enterprising plays to break the Australian line.

Persistence finally paid off in the 28th minute, with PNG winger Justin Olam dashing down the sideline to plant the ball down in goal, with the crowd erupting in jubilation.

The conversion was successful and the very first Mexican wave in the PM’s XIII history echoed around the crowd, growing in strength and sound as it continued to swell.

The second half started 14-6 in favour of the visitors, with PNG attacking the Australians’ line right from the kick-off.

Within minutes however, Nofoaluma started as he began the first half, scoring his second try of the night, before Euan Aitken crashed over the line three minutes later to give the Australians a commanding lead.

The Mexican wave erupted for a second time less than 10 minutes later, with Watson Boas streaking away from the Australian defence for a home try in the corner.

Chris McQueen scored under the posts soon after in his second appearance for the Australian Prime Minister’s XIII team and from there, the Australians wound down the match, with Jeremy Latimore and Jack Wighton scoring late tries in the 77th and 80th minutes respectively to give the Australians a 40 – 12 winning margin.

Coach Ivan Cleary had called for the team to soak up the experience and opportunity and not let their mates down, and the Australians delivered.

“I thought it was a great experience for all our boys, particularly a lot of the young guys,” said Cleary.

“Whilst we had a lot of good field position, it was a pretty hostile defence and you could see the boys just having to work things out on the run.

“This was a great experience not only as footballers, but as people as well, to be able to come to a place like PNG. Everywhere we’ve gone all week, we’ve been lauded by the public and the locals and it has been a great experience for all the guys.”

Captain Trent Merrin agreed with the coach, saying the opportunity to visit PNG and play in front of a respectful and appreciative crowd, was an incredible experience.

“Each player in the Aussie team is definitely going to take something out of this trip. It’s very humbling to come here and get amongst it and see how the PNG fans appreciate rugby league.”