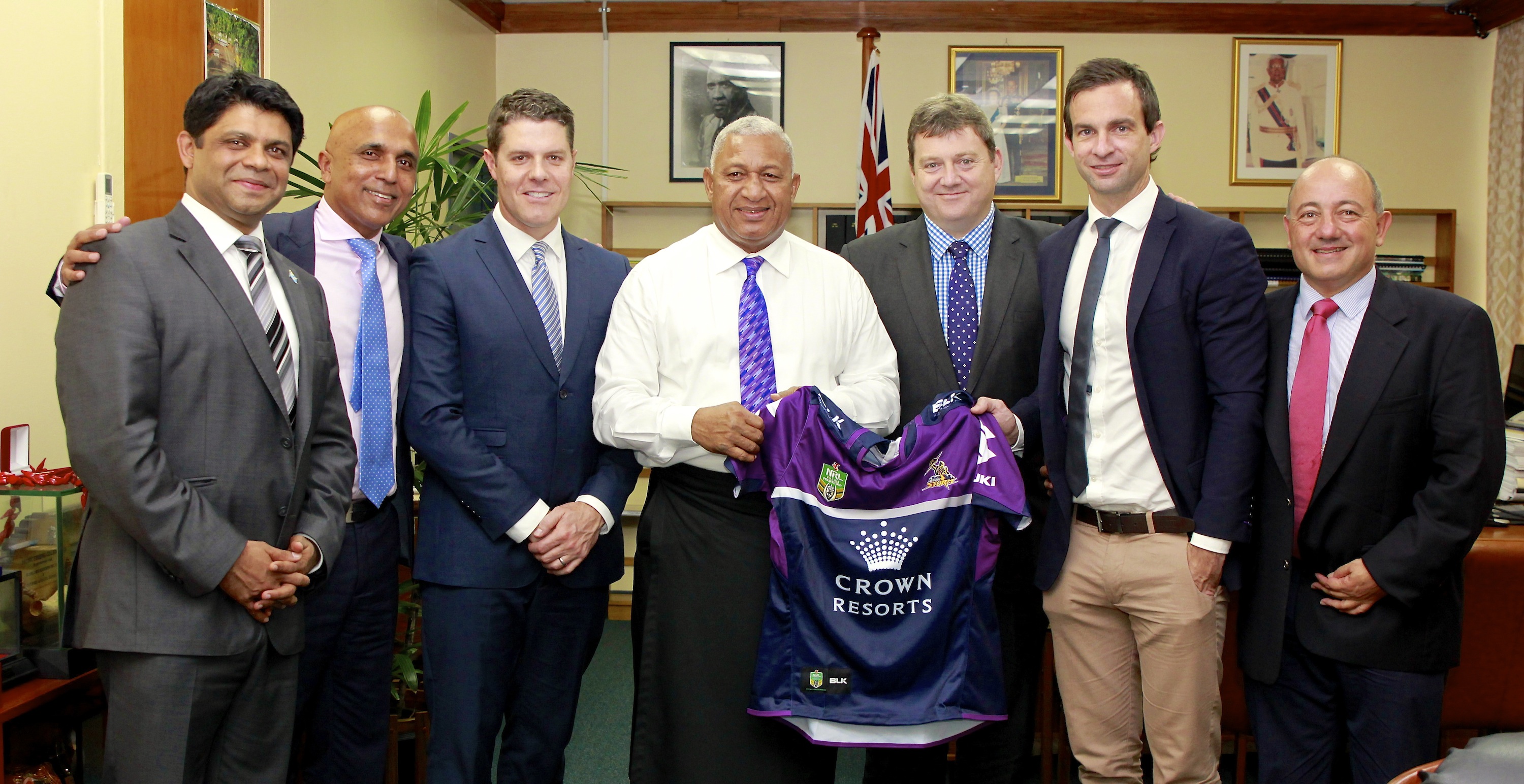 Melbourne Storm to play in Fiji

The Melbourne Storm rugby league team – one of the stars of the Australian National Rugby League – will start playing in Fiji from this year.

They will start of by playing an exhibition match in Fiji later in December against a local team selected by the Prime Minister, Voreqe Bainimarama. The plan was revealed after representatives of the Melbourne Storm met with the PM and the AG in Suva.

The Storm will also train in Fiji in December this year and in 2016. Alongside their training, the club will have coaching clinics for local clubs and young people as well as open trials for aspiring rugby league players. The proposed exhibition match will be a 9’s match between key Storm players and the PM’s invitation team.

The Club’s Chairman, Bart Campbell, thanked the Prime Minister and his Government for their support in agreeing to the squad coming to Fiji and said the 9’s match would undoubtedly be the highlight of the week. “We’re very much looking forward to coming to Fiji and playing before Fijian fans”, he said.

Mr Campbell also highlighted the support of the Melbourne Storm for rugby in the Pacific Islands and the fact that some of the club’s most talented players have come from the region, including Fiji’s Marika Korobiete. “He’s one of the most exciting players in the game and we’re proud to call him one of ours”, he said.

The Prime Minister and the Club Chairman also agreed to the Storm playing a regular season match in Fiji against another NRL team within the NRL competition from 2017 and every year thereafter.

The PM said “This is a wonderful opportunity not just for the fans and our young ones but also for those who want to play professionally in the NRL. My Government will facilitate and support this initiative by the Storm. The fact that the Storm have chosen to come to Fiji is an endorsement and shows confidence in my Government and the infrastructure we have built to facilitate such international events. I am extremely excited about it because it opens up new doors for our young men who are known for their natural talent, flair and athleticism.”

The AG said that this would “bring about increased economic opportunities for our tourism industry and our ability to show case our country as a viable investment destination. It is also wonderful that we do not have to fork out any budgetary/financial support to the Storm initiative. We simply have to ensure and facilitate that all the different private sector actors are able to collaborate to make this wonderful initiative happen.”

The Storm Chairman and his team also met with the Minister for Industry, Trade and Tourism.