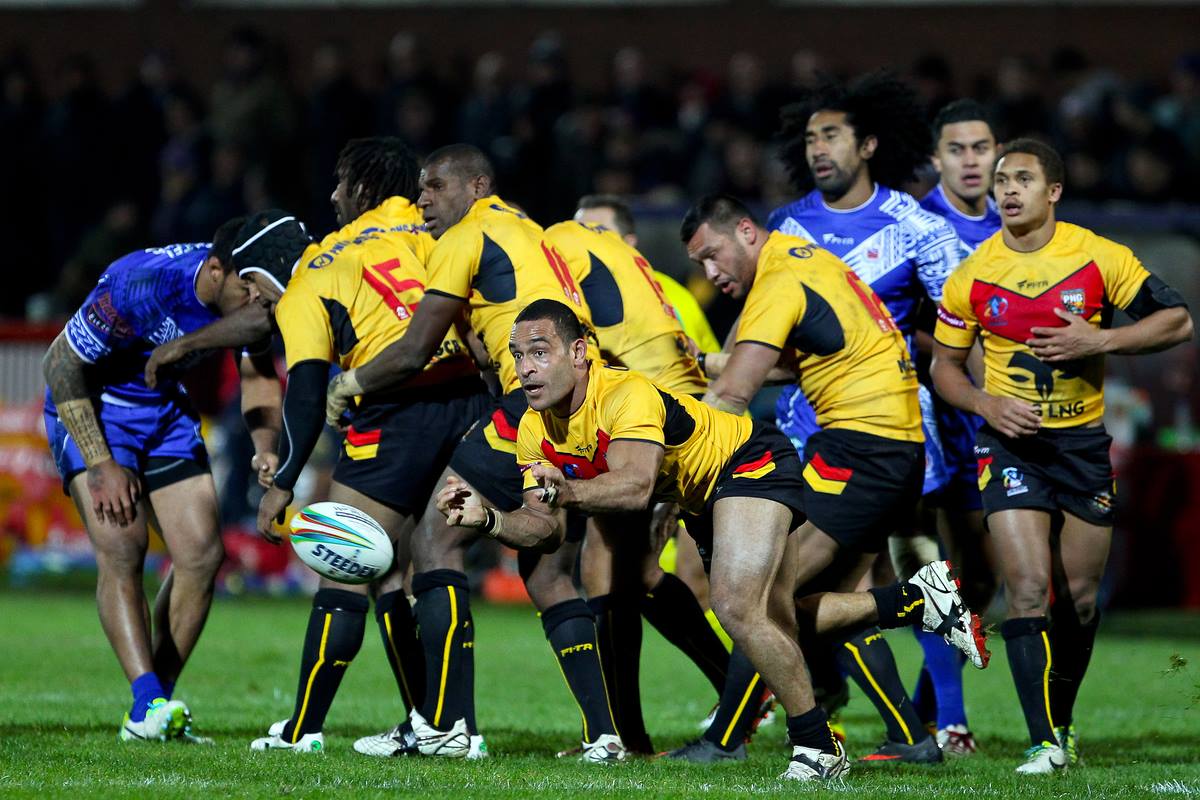 An historic first meeting between these two Pacific nations provides Papua New Guinea with the chance to show the rugby league world they are re-emerging as a genuine force on the international stage.

The first game of Saturday’s Pacific Test double-header features a Fiji team very much on the rise after reaching the semi-finals in consecutive World Cups while PNG are looking to re-establish their credentials after going winless at the 2013 World Cup against France, Samoa and New Zealand.

The introduction of the PNG Hunters into the Intrust Super Cup has brought added stability to the national team who recorded a 32-18 win over Tonga in a one-off Test at the end of last year, with nine members of the current Hunters squad selected this weekend.

Fiji’s back three of Kevin Naiqama, Marika Koroibete and Eto Nabuli come in with a combined 12 NRL tries between them in 2015 and with the promise of more spectacular displays against the Kumuls.

PNG’s sprinkling of NRL talent stretches only to Ray Thompson (Cowboys) and Nene MacDonald (Roosters) but the likes of Rhyse Martin, Luke Page and Thompson Teteh have been outstanding in the state competitions.

If Fiji aren’t careful, the Kumuls are well and truly capable of pulling off a massive upset.

Watch Out Fiji: When Wellington Albert represented the Kumuls at the 2013 Rugby League World Cup he did so to prove that players from PNG should be just as attractive to NRL clubs as players from other Pacific nations. Courtesy of some eye-catching displays on the wing he was snapped up by Panthers general manager Phil Gould but missed most of last year with a shoulder injury. His next mission is to prove to Panthers coach Ivan Cleary that he is ready for first grade and at 194 centimetres and 110 kilograms he’ll be a handful for the Fijian defence.

Watch Out PNG: They say the condor has a powerful set of wings but I reckon even they’d be envious of a Fiji wing pairing of Marika Koroibete and Eto Nabuli. Koroibete’s impact on the NRL was almost instant when he made his debut for the Wests Tigers in 2012 and in 2015 at the Melbourne Storm he has developed into one of the keys in their strong start to the season. Nabuli’s strength lies in his towering 197cm frame; let’s face it, any player who can be tackled on the 10m line and still stretch out to score is hard to contain. The match will be won in the middle but the fun will be had on the fringes.

Key Match-up: Apisai Koroisau v Ray Thompson. Whether Thompson lines up at hooker or in the halves for the Kumuls remains to be seen but regardless of the number on their backs these two will be critical in dictating who can make the most of any physical advantage. Koroisau has been named at hooker for Fiji despite playing the past few games for the Panthers in the halves while Thompson was superb in his call-up to the Cowboys’ NRL team last start. Both have big-game experience and with youthful exuberance all around them will be the players the respective coaches rely on to provide structure and discipline in the middle of the field.

History: What history? Quite incredibly, Saturday’s Pacific Test double-header will mark the first time that Fiji and Papua New Guinea have met in an official rugby league Test. In their past six Test matches the Fijians have enjoyed wins over Tonga, Samoa and Ireland while the Kumuls’ record is a poor one in recent years, their last Test wins coming against Cook Islands and Samoa at the 2009 Pacific Cup.

Did You Know: Both teams have two sets of brothers representing them in this Test. Fiji’s halves combination consists of the Millard brothers, Darryl and Ryan, while the starting forward pack boasts Saifiti twins Jacob and Daniel who play for Newcastle in the Holden Cup. The Kumuls also have plenty of brotherly love with Panthers pair Wellington and Stanton Albert and Rhyse and Tyson Martin who play in the Intrust Super Cup with Townsville and Mackay respectively.

The Way We See It: Given their performance at the 2013 World Cup Fiji go in as heavy favourites but the Kumuls will be strengthened by the inclusion of nine members of the PNG Hunters team that has played in the Intrust Super Cup the past two years. A host of Fiji eligible players have been selected in the City and Country Origin teams making them somewhat vulnerable to a Kumuls upset. There is perhaps enough NRL experience to get the Bati home but it won’t be by much. Fiji by eight points.