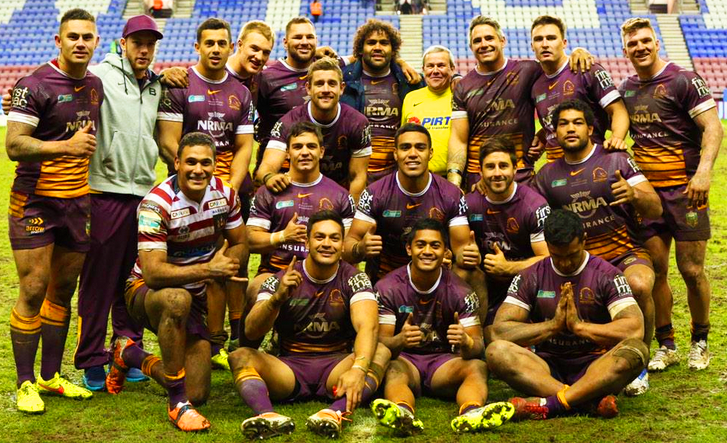 Brisbane have won a controversial golden-point contest to claim the World Club Series trophy for Australia, despite a piece of magic from a player who is NRL-bound next season.

Following St George Illawarra’s six-point win in the series opener, Brisbane sealed the deal for Australia’s three NRL teams with a 14-12 victory in an error-strewn but highly entertaining fixture.

In farcical scenes, Anthony Gelling was sin-binned for a ridiculous charge-down on Parker’s first attempt.

The NRL sides appeared assured of taking an unassailable 2-0 lead when they held onto a six-point lead with two minutes to go before Sydney Roosters-bound winger Joe Burgess turned the match on its head with a magnificent try to send the match into extra-time.

The 20-year-old pushed off Justin Hodges on a 90-metre run in which he linked with five-eighth George Williams to bamboozle Broncos fullback Jordan Kahu.

Until that point, Lachlan Maranta’s expert finish of a crisp, sweeping backline play looked to be the difference in a match in which the forwards took centre stage in a brutal, physical match.

Until his late heroics Burgess had endured a forgettable game, making three errors – including two in front of his own tryline – the first of which led to the easiest of tries to Broncos hooker Andrew McCullough.

McCullough seized on a loose ball, which had been dislodged from Burgess’ grasp by a heavy Jordan Kahu tackle, and fell over the tryline to open the scoring.

The scores were locked up at 6-all at halftime thanks to a try to Wigan backrower Liam Farrell.

Brisbane’s highest-profile recruit, former Canberra whiz kid Anthony Milford, had a rocks-and-diamonds night that shows he remains a work in progress despite being one of the brightest young stars in the game.

Milford, who looked dynamic when given room while playing fullback for the Raiders, looked rushed in attack as Brisbane’s No.6 and let the Warriors off the hook with a series of poor attacking kicks, twice having them charged down.

But then he produced two trademark broken-field runs in the final 20 minutes to remind everyone of his immense talent.

Parker may face attention from the judiciary over a 34th-minute high tackle on Wigan’s Matt Bowen, which left the former North Queensland fullback dazed.