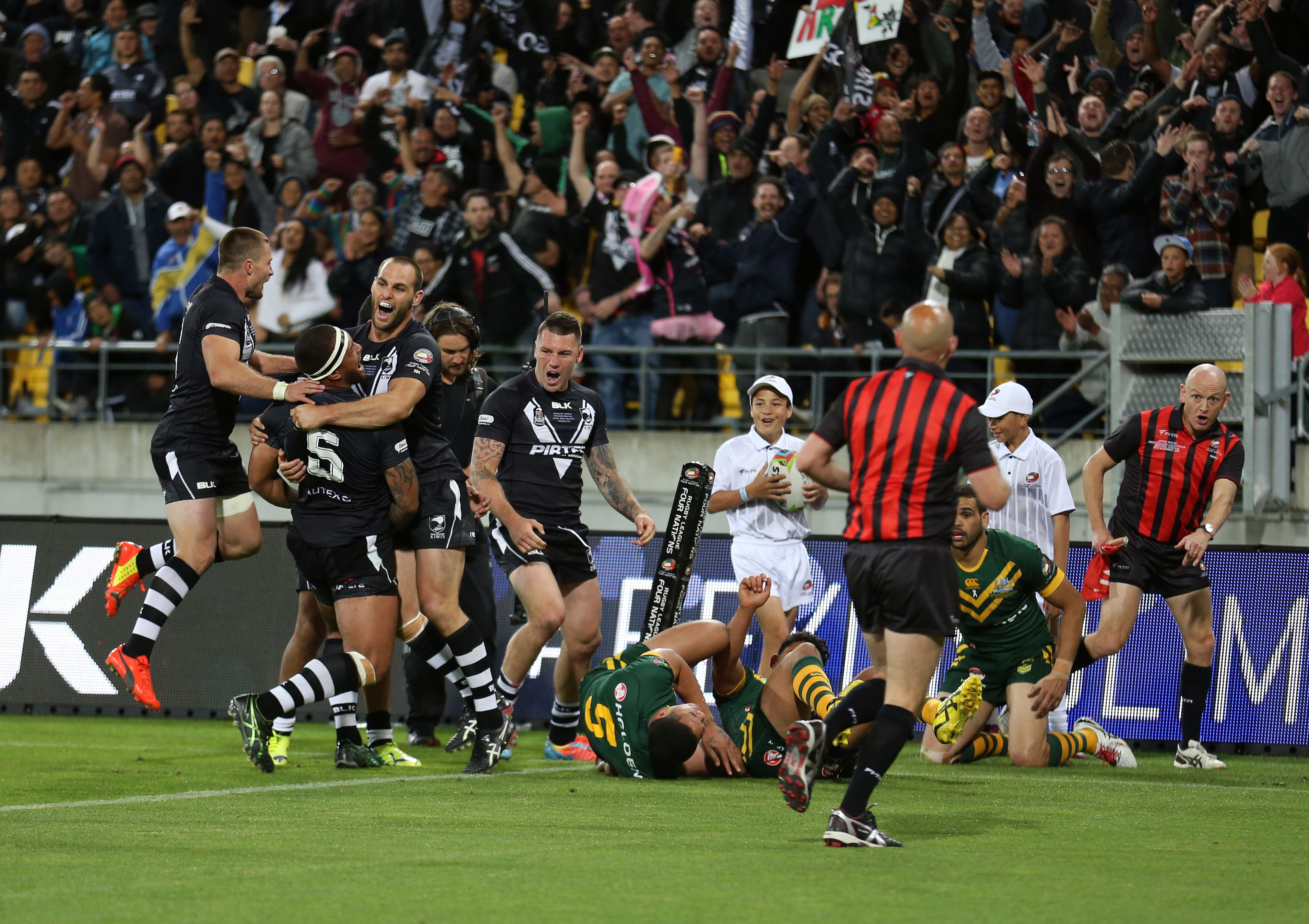 The New Zealand Kiwis have survived a late Australian comeback to win the 2014 Four Nations title in front of 25,093 fans at Wellington’s Westpac Stadium.

The win gave New Zealand their second title after claiming the 2010 edition of the tournament, and saw them beat the Kangaroos in consecutive matches for the first time in 61 years.

Inspired by a Man-of-the-Match performance from Shaun Johnson, the Kiwis took the lead in the 28th minute and never surrendered it.

However the Australians, who headed into the tournament with only one loss in their previous 36 Tests before losing twice to the Kiwis in the space of three weeks, came agonisingly close to a famous comeback victory.

Rookie winger Sione Mata’utia looked to have tied the game with less than a minute left, but referee Phil Bentham called the play back for a forward pass in the lead up.

The world champions had bossed the early exchanges, but couldn’t capitalise on two scoring chances in the first five minutes as Josh Mansour failed to control a Cameron Smith grubber over the line and Corey Parker found himself held up.

The Kiwis believed they had earned a repeat set on eight minutes, only for the on-field decision to be overturned and the Kangaroos went 80 to score the opener through Michael Jennings.

While the respective forward packs were determined to try and go through each other New Zealand centre Shaun Kenny-Dowall decided to go around on 23 minutes, finding a gap on halfway and making it to the 10-metre line before being dragged down.

A quick play the ball and shift to the right caught Australia short and a front-flipping Jason Nightingale crossed for a try which Shaun Johnson converted from the sideline.

When Cameron Smith was ruled to have collected Kieran Foran high the Kiwis elected to take the easy two points, grabbing an 8-6 lead before Manu Vatuvei capped off a piece of Shaun Johnson brilliance with a try in the left corner minutes later.

Johnson broke three tackles and shifted almost the width of the field before laying on a cut-out pass to Vatuvei who beat Mata’utia in getting to the line.

Another sideline conversion from Johnson sent the Kiwis to the sheds with a 14-6 lead, completing at an impressive 94 per cent.

If the end to the first half was good for New Zealand the start to the second was abysmal.

A soft penalty gave the ‘Roos back-to-back possessions from the kick off, allowing Daly Cherry-Evans to carve through the middle of the park and pass for Mata’utia to score his first Test try.

Smith converted to reduce the visitors’ deficit to two, before the game was stopped for several minutes while Martin Taupau – who had been close to the best player on the field with a series of massive charges – was stretchered from the field with a suspected neck injury.

With both sides looking a little lethargic it was Johnson to the fore, exposing a retreating Aussie defence by selling Daly Cherry-Evans a dummy to run 40 metres to the line and burning Greg Inglis for speed en route.

The mercurial Warrior proved he was human seconds later however, pinging the conversion off the post from mid-range and denying the Kiwis a crucial eight-point buffer.

The Kangaroos were defiant in defence, but had no answer to a Vatuvei barge over with 18 to go.

The veteran winger took Mata’utia and Dylan Walker with him over the line after quality build-up from Foran and Peta Hiku caught Australia short.

A try to interchange utility Ben Hunt in the dying minutes following a classy Dylan Walker flick and a suspect pass from Mata’utia sent Kiwi hearts racing, before Mata’utia crossed for what looked to be a game-tying score, only to be called back for a forward pass.

The Kiwis ran the ball out for the remaining seconds, collecting their second Four Nations title and going some way to avenging last year’s World Cup loss to the ‘Roos.