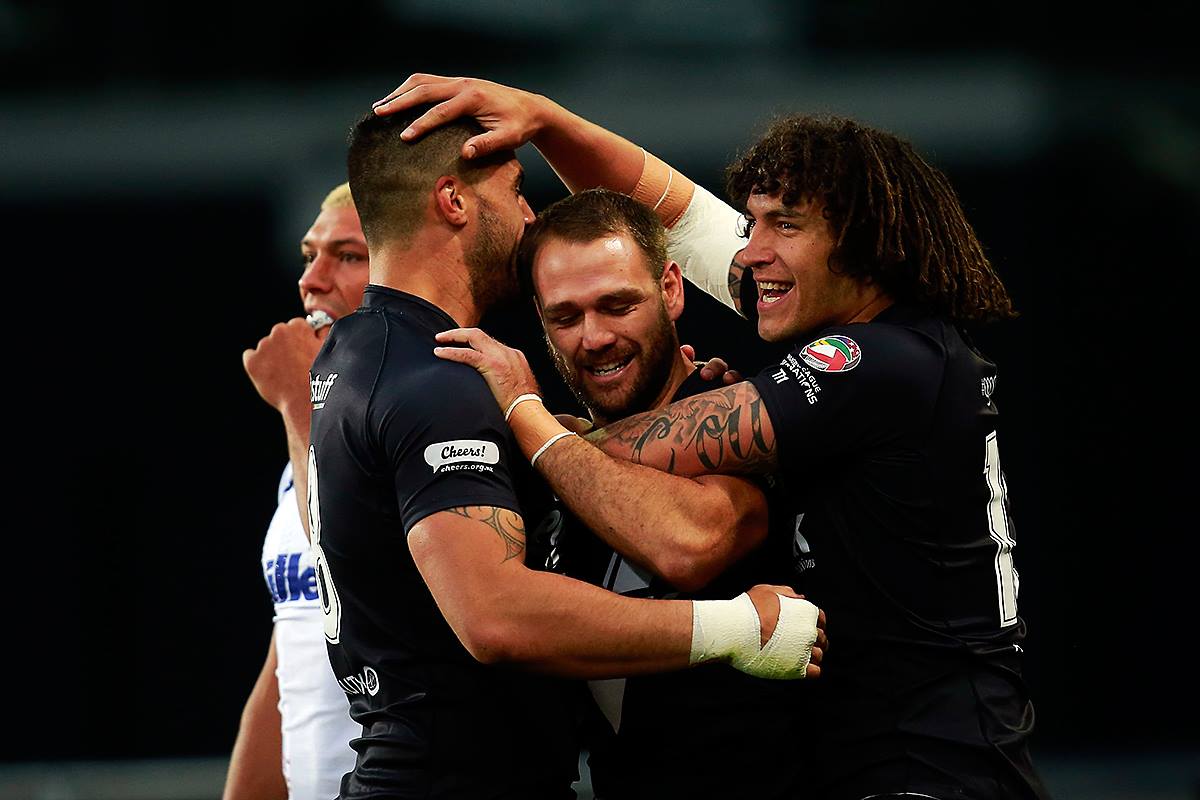 It was deja vu in Dunedin as England were foiled by New Zealand for the second time in 12 months.

Denied a place in the World Cup final last November by the Kiwis’ last-minute, two-point victory at Wembley, England are on the brink of exiting the Four Nations Series after going down 16-14 in a nail biter on Saturday.

New Zealand’s win confirms their place in next Saturday’s final at Wellington but they will have to wait until Sunday to discover their opponents.

England could yet reach the final but only if minnows Samoa beat defending champions Australia by fewer than eight points in the last round-robin game in Wollongong.

Half-back Shaun Johnson, the Kiwis’ hero in their 20-18 World Cup semi-final triumph, was again the scourge of England as he masterminded a display that produced tries for wingers Jason Nightingale (two) and Manu Vatuvei and kicked two conversions.

England, who gave a debut to Catalans Dragons second rower Elliott Whitehead, also scored three tries through their wingers, two of them from the prolific Ryan Hall, but Gareth Widdop saw his first two conversion attempts rebound off the uprights.

Hall’s controversially disallowed try against Australia in Melbourne will now come back to haunt England but they will also feel cruelly denied by the woodwork at the Forsyth Barr Stadium after going toe to toe with the Kiwis in an enthralling Test match.

Needing to win by 10 points to ensure a place in the final, England made the worst possible start, conceding the game’s first try within two minutes when Nightingale beat Hall to Johnson’s high kick, but they struck back almost immediately, with the Leeds winger taking Dan Sarginson’s pass to grab his 23rd try in as many appearances.

Sarginson once more demonstrated his international class on his second appearance but there were heroes all over as the tourists, superbly led by Sean O’Loughlin, went in search of their first win in New Zealand since 1992.

Back-to-back penalties enabled England to maintain the pressure and they showed plenty of enterprise on attack but without managing to turn it into points, with lively hooker Daryl Clark going closest from a trademark dummy-half dash.

In a rare attack, Vatuvei lost the ball in Josh Charnley’s tackle on the line before the Wigan winger took a superb cut-out pass from his club captain O’Loughlin to score England’s second try on 24 minutes.

The woodwork that earlier prevented Widdop from levelling the scores again thwarted England as the stand-off’s touchline conversion attempt rebounded off the far upright and the Kiwis regained the lead five minutes later after creating an overlap for Nightingale to go over for his second try.

Unlike Widdop, Johnson was on target with his goal kicks and that was the difference as England turned around 12-8 behind.

Hall had a chance to score his second try within two minutes of the restart but lost the ball attempting to stretch out and plant the ball on the line and the game looked to have slipped away when the Kiwis stretched their lead to 16-8 thanks to a clinical finish from Vatuvei.

However, the return from the bench of Clark instantly pepped up England’s attack and he handled twice in a glorious move that almost produced a try before more clever work from Sarginson enabled Hall to go over for his 24th international try.

This time Widdop found the target from the touchline to cut the deficit to two points but, despite a frantic finish, England once more came up just short when it mattered.