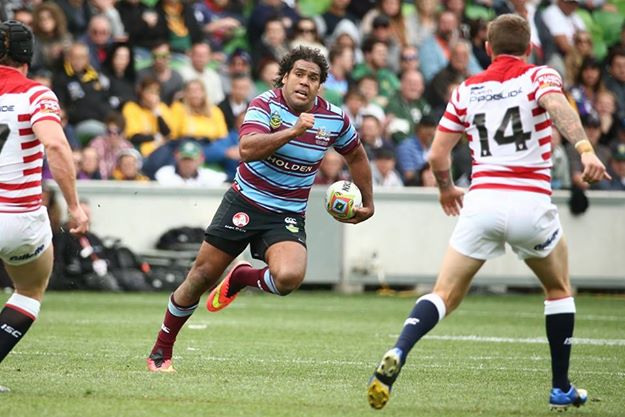 England had a last-minute try disallowed as Australia held on for a 16-12 victory in a gripping encounter in Melbourne to keep alive their chances of victory in the Four Nations Series.

The Kangaroos were clinging to their four-point lead when Leeds winger Ryan Hall attempted to touch the ball down ahead of full-back Greg Inglis following Liam Farrell’s grubber kick to the corner with just 46 seconds left on the clock.

Referee Gerard Sutton handed the decision onto his namesake Bernard, the video referee, who ruled that Hall had failed to find downward pressure and moments later Australia were celebrating a face-saving victory in front of a 20,585 crowd at AAMI Park.

The result means that England need to beat New Zealand in Dunedin next Saturday and hope their points difference is good enough to secure a place in the Wellington final a week later.

Hall was earlier in sensational form as England, wearing special jerseys to commemorate the 100th anniversary of the Rorke’s Drift Test, emulated the spirit of the 1914 team to establish a 12-4 lead.

England had been boosted by the return from injury of skipper Sean O’Loughlin while McNamara sprung a surprise by handing a debut to centre Dan Sarginson, a decision that paid off wonderfully well.

Both O’Loughlin and his back-row colleague Farrell, one of five Wigan team-mates, were placed on report inside the first eight minutes for suspect tackles while Kangaroos second rower Greg Bird was also on put report as Australian Sutton, a controversial choice as referee, contributed to a scrappy opening.

England gave away four penalties inside the opening 10 minutes and they conceded the first try when Daly Cherry-Evans, who took his place in the Australian side despite suffering a hip muscle tear against the Kiwis, got Bird into a gap and impressive centre Michael Jennings finished off the move.

Cameron Smith surprisingly missed the comparitively easy conversion and England struck back with two tries in six minutes, largely through the efforts of Hall, to establish a 12-4 lead.

The Leeds favourite came up with a brilliant 50-metre break out of defence to create the position for Sam Tomkins to get Watkins over for his eighth try in 10 appearances before accepting Sarginson’s wonderful one-handed pass to add to his record haul of 22 tries for his country.

Gareth Widdop, whose place kicking was so crucial in the win over Samoa, added both conversions to open up an eight-point advantage and it could have been more had lively replacement hooker Daryl Clark been able to make better use of a break from Sam Tomkins just before the break while the Man of Steel also went close early in the second half after England kept the ball alive on the last tackle.

Australia also missed a glorious opportunity late in the first half when Jennings got past Watkins but failed to find his winger with the final pass and England enjoyed another slice of fortune when Inglis was denied a try on 46 minutes for an obstruction.

Widdop and Sarginson then combined to bring down Inglis just short of the line but the game was blown wide open in the next play when debutant Ben Hunt grabbed a try two minutes after entering the action, touching down Smith’s grubber kick on the last tackle.

This time Smith added the goal to cut the deficit to just two points and the Kangaroos were back in front six minutes later when Hunt and Smith combined to get Cherry-Evans into a hole and Inglis was on his inside to touch down for his 25th try for his country.

Smith’s second goal made it 16-12 and that’s the way it stayed despite Hall’s last-minute heroics.